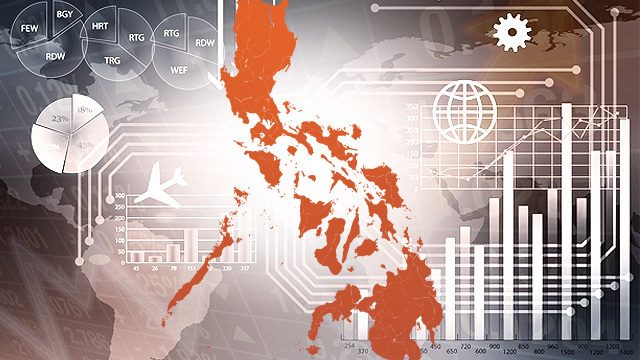 Facebook Twitter Copy URL
Copied
The Philippine economic growth is seen to be driven by the revival in manufacturing, consumption spending, stable remittances from overseas Filipinos, and tourism boom

MANILA, Philippines – First Metro Investment Corporation, the investment banking arm of Metrobank Group, expects the Philippines to become the fastest growing economy in the Association of Southeast Asian Nations (ASEAN)-5 this year, clocking in as much as 7.5% growth.

ASEAN-5 is composed of Indonesia, Malaysia, the Philippines, Singapore, and Thailand – the regional bloc’s top 5 economies.

“All engines of growth are up and running at a faster pace. The country’s economy will remain as the best performing in ASEAN,” Arjonillo said in a briefing in Makati City.

“We’ve seen continued buildup of capital goods, imports, and private construction, which will remain strong because we have major PPP (public-private partnership) projects that are ongoing,” Abola said in the briefing.

Philippine inflation, meanwhile, is expected to increase to 3.5% to 4% in 2018, as a result of higher-than-expected oil prices and impact of TRAIN law.

Due to higher taxes that will be imposed on a number of commodity goods, First Metro said higher inflation is expected in 2018, but it will still be within the 2% to 4% target set by the Bangko Sentral ng Pilipinas.

For Abola, the lowering of withholding tax is “sufficient to cover the higher cost of goods due to inflation.”

“We see the PSEi rising to a new level of 9,400 after making 14 highs last year,” Ulang said in the briefing.

She said higher stock transaction tax (STT) would not discourage investors from cashing in on the local bourse. (READ: Philippine stocks break 8,700 level to open 2018)

A 20% hike in STT on Monday, January 1 took effect at the local bourse in line with the Philippines’ new tax reform law.

“If you see opportunities in the market, no amount of tax burden will deter you from seizing the opportunity. And I think this is the moment that we have all been waiting for,” Ulang said.

It was last December 19 when President Rodrigo Duterte signed Republic Act No. 10963 or TRAIN law, a priority measure of his administration.

Philippine stocks on Wednesday, January 3 achieved another new record on the 1st trading day of 2018, breaching the 8,700 level for the first time in history. – Rappler.com