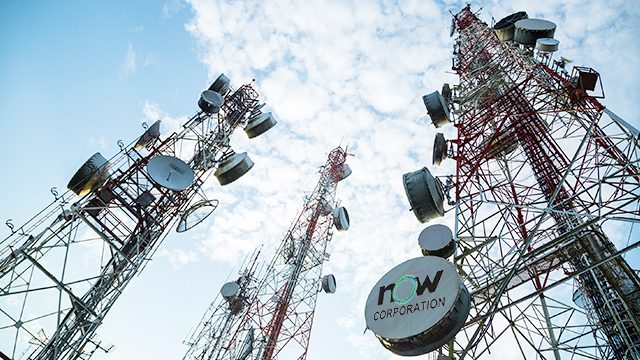 Facebook Twitter Copy URL
Copied
NOW Telecom is said to be among the groups vying to become the firm’s 3rd major telecommunications player, and it now has privileges similar to those granted to existing dominant players in the industry with the franchise extension

MANILA, Philippines – The government extended the franchise of NOW Telecom Company Incorporated (NOW Telecom) as the search for the third telecommunications player in the country intensifies.

In a disclosure by NOW Corporation (NOW) on Friday, February 23, the firm said, “On February 22, the franchise granted to NOW Telecom Company, has been extended for another 25 years or until Year 2043 under Republic Act No. 10972 which was signed for approval into law by the President of the Republic of the Philippines.”

The firm added, “With the said law, NOW Telecom, as a telecommunications company, now has privileges similar to those granted to existing dominant players in the industry.”

Mel Velarde-led NOW Corporation is one of the 3 firms the Department of Information and Communications Technology (DICT) said is forming a consortium to establish a third player in the country’s telco industry alongside newly-revitalized Philippine Telegraph & Telephone Corporation (PT&T) and ICT Converge Solutions.

The DICT initially had a deadline of March for prospective firms to submit bids for an auction of available 3G and 4G frequencies but recently moved it to May on the advice of the prospective bidders.

The government agency, along with the National Telecommunications Commission (NTC), said firms vying to be the third major telco player should have at least P10 billion in net worth, a congressional franchise, proven technical capability, and should not be related to the entrenched players, PLDT Incorporated or Globe Telecom.

They are also requiring the winning bidder to cover at least 80% of provincial capital cities and towns as well as 80% of chartered cities within 5 years from the date of award. – Rappler.com