Philippines to ‘add sweeteners’ in guidelines for 3rd telco auction Facebook Twitter Copy URL
Copied
The government is no longer requiring interested bidders to have a minimum net worth of P10 billion. Instead, it plans to award the 3rd telco slot to the participant with the 'highest committed level of service.'

MANILA, Philippines – The government will sweeten the auction terms for the selection of the country’s 3rd major telecommunications player, after some interested bidders expressed concerns over “stringent” proposed guidelines.

“We [have] received so many comments and we are now subjecting it [to] a substantial change. For instance, we will not look at the minimum capital investment, but at the actual committed rollout plan of the bidders,” Eliseo Rio Jr, officer-in-charge of the Department of Information and Communications Technology (DICT), said on Tuesday, February 27.

The changes will come after several stakeholders brought up the “stringent requirements,” which may dissuade many interested parties from entering the local telecommunications market.

Global research firm BMI Research said the initial guidelines on the selection of the 3rd telco “could dampen foreign interest” since “stringent” foreign ownership rules have not been relaxed. (READ: 3 consortia forming up to battle for Philippines’ 3rd telco slot)

During the public consultation held in Quezon City, Rio said the DICT and the National Telecommunications Commission (NTC) will no longer require a net worth of at least P10 billion from interested groups.

Instead, the government will determine the winning bidder according to the “highest committed level of service,” said Rio.

NTC Commissioner Gamaliel Cordoba said during the consultation that the new telco player is expected to cover at least 65% of the population after 5 years, as recommended by Switzerland-based International Telecommunications Union. 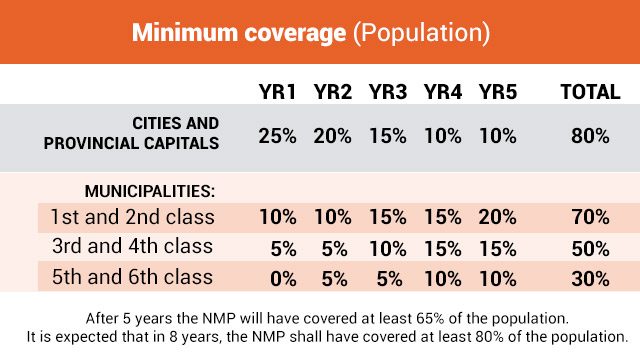 Rio highlighted that 40% of the Philippines is still unserved and underserved by Globe and PLDT.

“Even after 20 years of the incumbent telcos’ exist[ence], we have these problems. So, we are going to use the 3rd telco player to resolve and bring up the standard of the Philippine telco industry,” he said.

Other parameters for the 3rd telco auction include the minimum average speed for the 1st 5 years and a performance bond.

During the 5th year of the new major telco player, Rio said it should be able to provide a minimum internet speed of 16 megabits per second (Mbps).

“If they fail to comply with their promised commitments, we are thinking of forfeiting the performance bond of P40 billion,” the DICT official said.

Rio had earlier identified the frequencies that would be for the new major player, as stated in the 1st draft memorandum circular. (READ: PH gov’t releases draft guidelines for 3rd telco auction)

Responding to a concern of a stakeholder during the public consultation, Rio said the spectrum available to the new major player is still sizeable, as compared to those of Globe and PLDT. “It is of course not as big as the incumbents have, but at least as a startup, it will be sizeable,” Rio said during the public consultation.

The DICT and the NTC are also looking at adding sweeteners to entice more bidders to participate in the auction. (READ: Naming Philippines’ 3rd telco might take longer than expected)

“Maybe we can add some sweeteners. The first thing mentioned is there should be domestic roaming for a specific timeframe. That can be pursued through a memorandum circular to be issued by NTC,” said Cordoba.

He added that another sweetener could be mobile number portability, which would allow consumers to keep their cellphone numbers for life even if they switch to another service provider, change subscription plans, or switch between prepaid or postpaid.

The Senate recently approved the Lifetime Cellphone Number Act or Senate Bill No. 1636.

“The last sweetener would be infrastructure sharing,” Cordoba added.

“Jacinto is pushing [for] this so that there will be sharing of towers among the 3 telco providers,” Cordoba added.

Jacinto had earlier said that the government would tap an independent player to build and develop cellular towers for common use.

According to the DICT, the final version of the terms of reference for the auction is targeted to be published on April 9, with the tentative bidding date on May 24.

Rio said his office is inclined to grant radio frequency spectrum and the license to operate to the winning concessionaire by end-May or early June.

Sought for comment, Winthrop Yu, chairman of the Internet Society-Philippines Chapter, said: “I have no problem with it. I am glad they removed the capital spending requirement.”

“For one thing, I am very happy that they are very open to the feedback of stakeholders even to the point of reacting to Facebook comments and tweets. I believe at the minimum, what the government is trying to do is remove what in [an] election would be nuisance candidates that don’t have the capacity to actually deliver results,” Yu added.

For BMI Research, the biggest hurdle in enticing a new telco player remains the cap on foreign ownership.

“We believe that the 40% cap on foreign ownership, which is a Philippines’ Constitution requirement, to be the biggest hurdle,” the research firm noted in its report.

For instance, China Telecom was nominated by the Chinese government after an invitation from President Duterte to Prime Minister Li Keqiang.

But China Telecom has made no apparent progress in negotiating a deal, which according to BMI Research is “a possible indication at its dissatisfaction” of being unable to retain a larger stake in the business. – Rappler.com