MANILA, Philippines – An underground shopping and dining experience will be part of the planned subway in Metro Manila.

To help pay off the loan extended by the Japan International Cooperation Agency (JICA), Finance Secretary Carlos Dominguez III said the government will lease retail and dining spaces around the stations of the P356.96-billion Metro Manila Subway.

Dominguez said in a statement on Sunday, March 25, that the retail concept will be similar to Japan’s underground shopping experience, where shops and restaurants thrive around subway stations.

“Definitely, we will be utilizing that so we are going to be putting value to the underground area in Manila. And the revenues will definitely contribute to paying off this loan,” the finance chief said.

JICA on March 16 extended a loan of ¥104.53 billion (P51 billion or $934.75 million) to the Philippines. This only represents the first tranche of the total loan funding requirement for the construction of the first phase of the Metro Manila Subway.

“Although I must say the loan is really almost too good to believe because it’s 40 years with a 12-year grace period…. This is [a] very generous package from JICA,” Dominguez said.

The loan agreement for the first tranche carries an interest rate of 0.10% per year for non-consulting services such as civil works, the depot, the railroad, electromechanical works, and power supply.

It also carries an interest rate of 0.01% per year for consulting services, payable in 40 years inclusive of a 12-year grace period under the special terms for economic partnership of JICA. 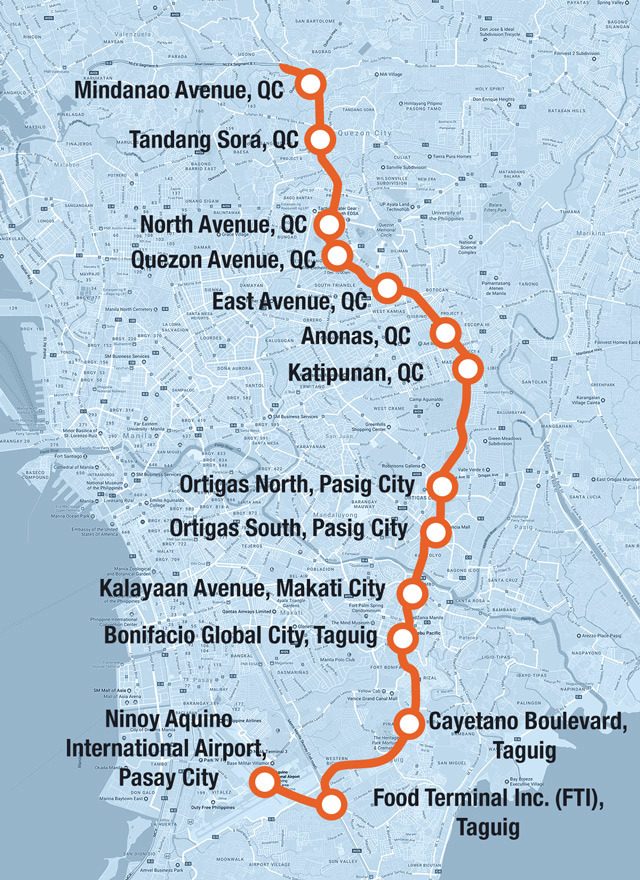 The Department of Transportation (DOTr), the subway’s chief implementor, plans to position subway stations “beside or near a state property” to maximize the investment returns for the government. (READ: $7-B Metro Manila subway to be extended to NAIA)

Transportation Undersecretary for Railways Timothy John Batan said the planned North Avenue Station will be adjacent to the Veterans Memorial Medical Center, while the Katipunan Station will be built on Camp Aguinaldo property.

Batan added that a station at Bonifacio Global City will be beside a property of the Bases Conversion and Development Authority (BCDA), while another station will be built near the Philippine Air Force field at the Villamor Air Base.

“As much as possible, we’ve selected station locations that would maximize the return of that value to the government coffers,” he said.

Batan added that this was among the instructions of Transportation Secretary Arthur Tugade when the department was finalizing the locations of the subway stations.

Regarding concerns on right-of-way delaying implementation of most big-ticket infrastructure projects, Batan gave an assurance that this would “not be a major issue” for the subway, as its technology involves mostly subterranean construction.

As for the land required for the at-grade station stops, Batan said the DOTr has been working on identifying these as early as November 2017.

“The acquisition process is in full swing. We have committed to substantially deliver the right-of-way for the first 3 stations and the depot in the 3rd quarter of this year,” Batan said.

“And as of this day, we are on track with that program of delivering right-of-way,” he added.

The first phase of the Metro Manila Subway will stretch from Mindanao Avenue in Quezon City to the Food Terminal Incorporated (FTI) area in Taguig City, and will continue all the way to the Ninoy Aquino International Airport (NAIA).

The subway project will involve the construction of an underground railway spanning about 30 kilometers with 14 stations, expected to be completed by 2025.

Of the total project cost, 73% (¥573.73 billion) will be funded by JICA through a loan arrangement comprising 3 to 4 tranches. The remaining 27% (¥215.16 billion) will be shouldered by the Philippine government. – Rappler.com