Construction of NLEX-SLEX Connector Road to start by July 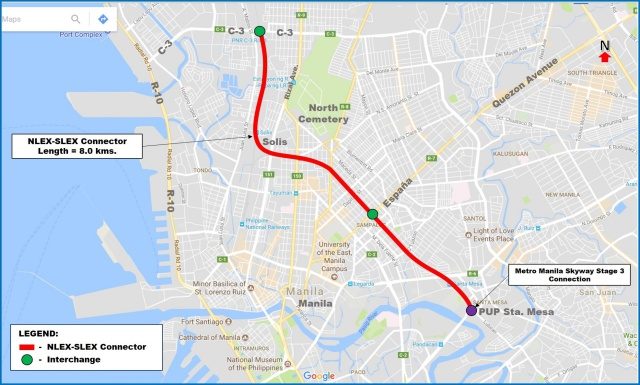 “By June or July, we should be mobilizing by that date,” Rodrigo Franco, president and chief executive officer of NLEX Corporation, told reporters on the sidelines of an event in Quezon City.

It was in July 2016 when NLEX Corporation secured a P23.2-billion deal to build, operate, and maintain the NLEX-SLEX Connector Road – an unsolicited proposal to the Department of Public Works and Highways (DPWH).

The NLEX-SLEX Connector Road would link C3 in Caloocan City to the Polytechnic University of the Philippines (PUP) campus in Sta Mesa, Manila.

Some segments, according to the Public-Private Partnership (PPP) Center, would run above the lines of the Philippine National Railways (PNR).

“When the connector project starts, we will need additional funding,” Franco said.

NLEX Corporation had earmarked P19 billion this year for the construction of the NLEX-SLEX Connector Road and the Harbor Link Segment 10.

The Pangilinan-led firm first submitted an unsolicited proposal in 2010 for the connector road.

On January 21, 2014, NLEX Corporation signed a joint venture agreement with state-run Philippine National Construction Corporation (PNCC) – the holder of the NLEX franchise – to build that road.

But months later, the Department of Justice (DOJ) said that the National Economic and Development Authority (NEDA) Board approval of the agreement was “without factual basis or justification.”

The connector road proposal was again subjected to review by the NEDA Board.

In February 2015, the NEDA Board ruled that NLEX Corporation’s offer should be bid out through a Swiss challenge.

A Swiss challenge is the course the government takes when dealing with unsolicited proposals. It requires an invitation to make competing offers while giving the original proponent the right to match them. (READ: EXPLAINER: Not all projects are eligible for a Swiss challenge)

Because of the changes in the mode of implementation and right-of-way acquisition, the expected start of commercial operations of the NLEX-SLEX Connector Road has been moved to February 2022. – Rappler.com