MANILA, Philippines – The amount of money sent home by overseas Filipinos plunged last March, seeing the sharpest decline since April 2003, due to the continued repatriation of Filipino workers from Middle East countries as well as fewer banking days.

Data from the Bangko Sentral ng Pilipinas (BSP) released on Tuesday, May 15, showed that cash remittances, or remittances formally channeled through banks, totaled $2.36 billion in March 2018, lower by 9.8% than the $2.61 billion in the same month a year ago.

This was the sharpest drop in remittances since April 2003, when the country booked a decline of 10.9%.

BSP officer-in-charge Diwa Guinigundo attributed this to the 9.7% drop in cash remittances from land-based workers and 10.2% decline in transfers from sea-based workers.

“The continued repatriation of [Filipino] workers from the Middle East countries could have affected the inflows of cash remittances,” Guinigundo said, adding that fewer banking days due to the celebration of Holy Week as well as the high base effect contributed to the sharp decline.

Guinigundo said countries that registered the biggest declines in cash remittances in March were Saudi Arabia, the United Arab Emirates, Qatar, and the United States. 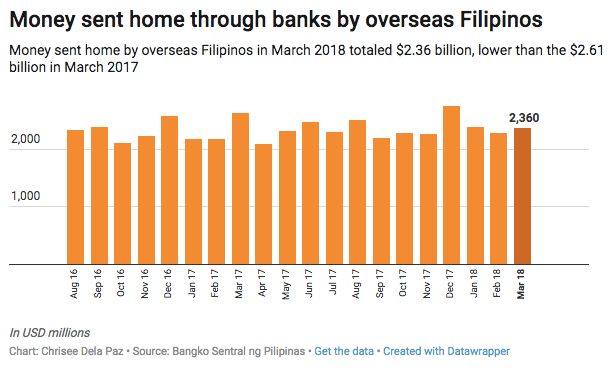 It was in February when the Department of Labor and Employment (DOLE) issued a total deployment ban on Kuwait due to cases of abuse involving Filipino workers. The most high-profile case was the death of domestic helper Joanna Demafelis.

The diplomatic row worsened when Kuwait declared Philippine Ambassador Renato Villa persona non grata over the rescues of Filipino workers, which were allegedly not coordinated with the Kuwaiti government. The two countries have since signed an agreement to protect Filipino workers.

But mainly because of the repatriation of workers, personal remittances fell 9.9% to $2.63 billion in March this year, from $2.91 billion in the same month a year ago.

Personal remittances are cash and non-cash items that flow through both formal or via electronic wire and informal channels, like money or goods carried across borders.

Money sent home by overseas Filipinos account for around 10% of the country’s gross domestic product (GDP). It also gives the country the buffer it needs to survive external shocks. – Rappler.com