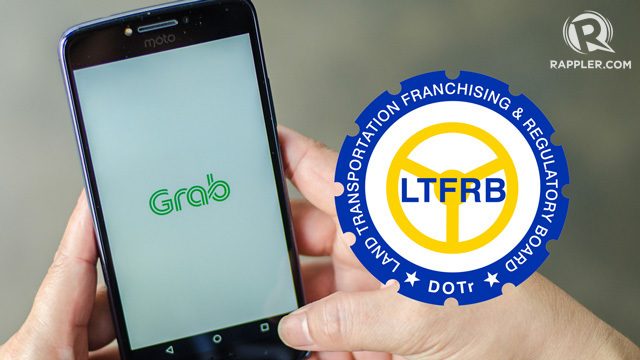 In a petition filed before the LTFRB, Grab Philippines argued that the suspension was an “infringement” of the equal protection clause guaranteed by the Philippine Constitution. A copy of the petition dated May 22 was made available to media on Friday, May 25.

“It is clear that members of the Honorable Board who issued the order suspending the per-minute charge of the petitioner have caused undue injury and prejudice to the petitioner,” Grab said.

They also said that the suspension of the charge “gave unwarranted benefits and advantage” to other transportation network companies, arguing that operators and drivers will “transfer” to other ride-hailing companies given the situation. (READ: How much are the fares of new ride-hailing apps?)

Grab Philippines also said that a motion for reconsideration on the suspension was filed, meaning the suspension should have been delayed and should not have been rendered “immediately executory.”

“Since the filing of the Motion for Reconsideration by the petitioner on April 20, 2018 has the effect of staying the April 19, 2018 order, petitioner then has the legal authority to resume the imposition of the P2-per-minute charge pending the resolution of the motion,” Grab said.

PBA Representative Jericho Nograles had accused Grab of illegally charging its customers P2 per minute of travel on top of its government-approved pricing scheme. The charge has since been suspended. (READ: Did Grab ‘illegally’ charge its riders higher fare?)

In a text message to Rappler, Nograles said Grab’s petition is “unfounded.”

“Their petition is unfounded since reimposition means it was legal in the first place. It was never approved therefore there is nothing to reimpose,” Nograles said on Friday.

“They dont have the moral authority to talk about equal protection of the laws when they have admitted that they have never conducted a public hearing for the P2-per-minute [charge],” Nograles added.

Under the government-approved fare scheme, Grab can only charge a flagdown rate of P40 and an additional P10 to P14 per kilometer, a December 2016 order said.

Grab earlier admitted that riders were not informed of the travel charges when first added to their fares mid-2017.

In a Facebook post, Grab Philippines head Brian Cu said that the reimposition of the travel charge would help the drivers adjust to higher oil prices and vehicle maintenance cost.

Cu also said that a pending fare hike petition has been filed with the LTFRB. He asked the drivers and operators to continue driving under Grab,.

“[K]ami naman sa Grab ay nakiki-usap rin sa inyo (We, in Grab, are appealing to you) to continue driving and to continue providing good service to the riding public. Maging ang mga pasahero natin ay nahihirapan sa mga panahong ito. (Even our passengers are experiencing difficulties during at this time),” Cu said.

Cu earlier said that the suspension of the charge led to fewer Grab drivers, with only 35,000 drivers available for over 600,000 bookings a day.

The LTFRB will hold its next hearing on the alleged illegal charges on May 29.– Rappler.com