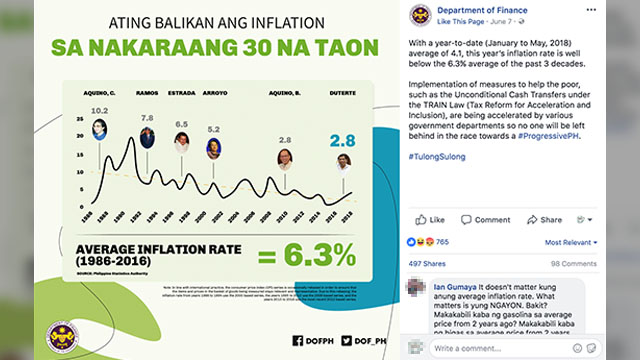 MANILA, Philippines – Ex-Department of Finance (DOF) undersecretary Sunny Sevilla slammed his former agency for posting a “tone-deaf” and “misleading” graph showing inflation in the Philippines over the last 30 years.

The DOF’s Facebook post stated that inflation in the country stood at 6.3% on average over the past 3 decades, and 4.1% year-to-date. (READ: Philippine inflation spikes at 4.6% in May 2018)

It also showed that average inflation during former president Corazon Aquino’s term stood at 10.2%, while it has just been 2.8% during President Rodrigo Duterte’s term. The post did not indicate the average inflation rate during the dictatorship of Ferdinand Marcos.

The DOF even went on to explain in the comments section that the graph was intended to show that the government is supposedly “doing quite well in making our inflation low and stable.” (READ: [OPINION] Higher inflation: Is TRAIN to blame? [Part 1] and [Part 2])

It also attempted to appease growing concerns over the Tax Reform for Acceleration and Inclusion (TRAIN) law.

“Implementation of measures to help the poor, such as the unconditional cash transfers under the TRAIN law… are being accelerated by various government departments so no one will be left behind in the race towards a #ProgressivePH,” said the DOF in its Facebook post.

However, Sevilla said he was “dumbfounded” by the finance department’s commentary.

What’s wrong with it?

Sevilla said the DOF was wrong to directly link presidential terms to inflation. He also questioned the agency’s move to compare Duterte’s term – just about to wrap up its second year – to the average inflation of the full terms of past presidents.

“These are such obvious indicators of economic illiteracy and political sycophancy that they shouldn’t be taken seriously,” Sevilla said.

Meanwhile, economics PhD candidate and Rappler columnist JC Punongbayan explained that comparing the average inflation rate across administrations was “uninformative because inflation is due to many factors that are not attributable to any one president.” 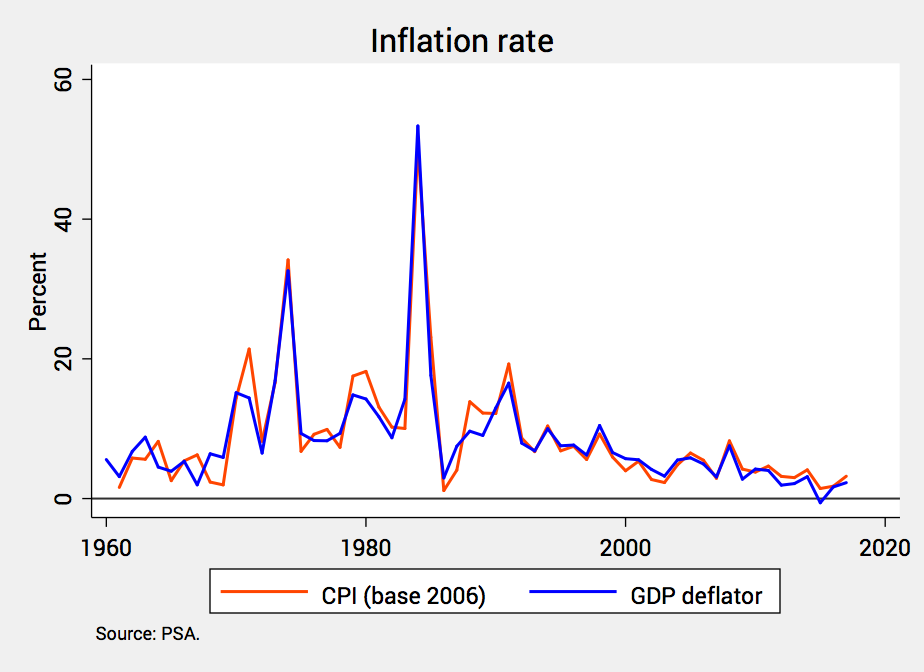 “Although inflation has been going down in the past decades, this doesn’t remove the fact that there’s continuous acceleration of prices in recent months, partly due to TRAIN,” Punongbayan said.

According to Punongbayan, the DOF’s graph does not give the full picture of the history of inflation in the Philippines.

“[The rise of prices] started late 2015, [but the] DOF is burying this fact by showing the annual inflation figures plus the averages per president,” he added.

What the DOF should have posted

“‘Dear Filipinos, we get it. We didn’t expect inflation to be this high. We were mainly unlucky. We had no idea oil prices would go up to this level. But some of this is our fault. We messed up on the rice situation and didn’t import enough on time,'” he said.

Sevilla also recommended that the DOF assure Filipinos they are not viewed as “crybabies” for expressing their concerns about rising prices.

The former finance undersecretary said the government’s economists must be “more sensitive to the potential negative effects of further rounds of [tax] reform.” – Rappler.com