Jul 4, 2018 7:37 PM PHT
Aika Rey
Facebook Twitter Copy URL
Copied
The Department of Transportation also says that audit report on the controversial Dalian trains is already out, but the decision whether these could be used or not depends on pending discussions with the Chinese company 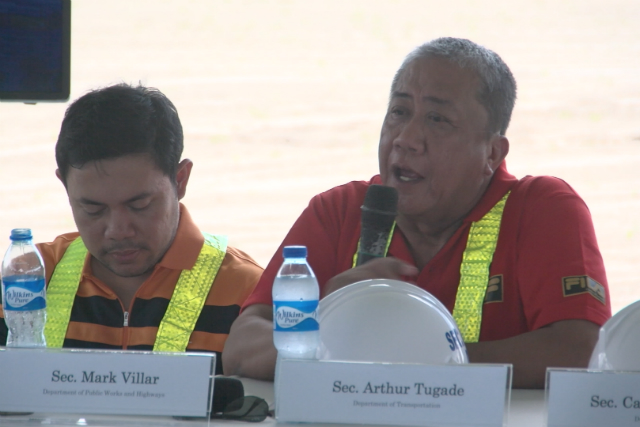 In a press briefing at the site of the New Clark City in Capas, Tarlac, Tugade said that Japanese company returns onboard this July, after the signing of a loan agreement with the government of Japan is concluded.

“We will upgrade the rails and existing coaches and that is happening in the next couple of months when Sumitomo is already hopefully onboard,” Tugade told reporters.

Busan Universal Rail Incorporated (BURI) took over as maintenance provider of MRT3 early 2016. DOTr terminated its contract with BURI in November 2017 after it failed to address the maintenance issues raised by the government.

Since the year started, the MRT3 has broken down 60 times and experienced a record low of 6 running trains back in February. Ridership was cut down to around 200,000 then, from the average daily ridership of 463,000 in 2017.

Tugade also announced that the audit conducted by German-based TUV Rheinland on the controversial Dalian trains was finally completed.

Tugade said, however, that talks between China’s CRRC Dalian Company Limited was still ongoing. The discussion will determine the fate of the 48 Dalian trains – whether it will be used by the MRT3 or not.

“Is the evaluation showing that the submission is complete and in accordance to the TOR (terms of reference)? [The] answer is no. Is the non-compliance substantive and prejudicial to safety and comfort of passengers? That we will find out during the discussion with Dalian,” Tugade said.

The Department of Transportation said the Dalian trains exceeded the total weight stipulated in its contract. The DOTr specified that each train should weigh 46.4 tons. However the TUV Rheinland audit found out that each Dalian train weighed 49.7 tons.

During the Senate hearing on the MRT3 in February, an expert said the 48 Dalian trains were “not overweight” and within the allowable limit that the MRT3 tracks could carry.

“The report will be discussed with Dalian at sana ho huwag nating pangunahan. Kapag tapos na ang mga pag-uusap, kakausapin ko kayo on the firm and final position on these trains,” Tugade said.

(The report will be discussed with Dalian and let’s not pre-empt. When the discussions are done, I will talk to the public on the firm and final position on these trains.) – Rappler.com