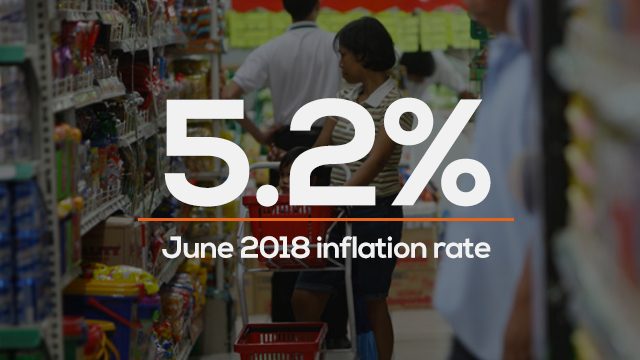 June inflation is 0.6% percentage points higher than in May, which was at 4.6%.

The latest figure exceeded both government and market expectations. The last time inflation hit 5.2% was in October 2011.

“It was primarily brought about by higher annual rate posted in the heavily-weighted food and non-alcoholic beverages index at 6.1%,” the PSA said.

The highest annual rate of 7.7% was observed in the Autonomous Region in Muslim Mindanao (ARMM) while the lowest was seen in Region III (Central Luzon) at 3%. The PSA announced the latest inflation figure on the same day that a provisional P1-hike in the minimum jeepney fare  was supposed to take effect in Metro Manila, Central Luzon, and Calabarzon.

The government is aiming to keep inflation within 2% to 4% from 2018 to 2022. However, the Development Budget Coordination Committee expects to miss the target for this year after it revised the 2018 average inflation outlook, now between 4% to 4.5%.

Bangko Sentral ng Pilipinas (BSP) economists projected June inflation to settle between 4.3% to 5.1%. The Department of Finance (DOF) forecasted it to be at 4.9%.

“We will review and update our situational assessment and forecast inflation path. This will shape the strength and timing of our next monetary policy response to firmly anchor inflation expectations,” Espenilla said.

Malacañang said the high inflation in June should not be a cause for alarm.

“It’s not something to worry about,” Presidential Spokesperson Harry Roque said in a news briefing, adding that 5.2% inflation is “within historical amounts.”

“It’s higher than usual but it’s not something we should be alarmed [about],” the Palace spokesman said.

Roque said the higher inflation number was bound to happen as there is “money going around,” and cited the government’s infrastructure program and higher purchasing power of taxpayers because of the tax reform law and free tuition in state universities and colleges.

Senator Paolo Benigno Aquino IV on Thursday reiterated his call for the suspension of higher excise taxes under the Tax Reform for Acceleration and Inclusion (TRAIN) law.

Aquino noted that just this Tuesday, July 3, oil companies hiked fuel prices. The Manila Electric Company (Meralco) also announced it expected a higher generation charge in July because of the weaker peso, and the “yellow alert warnings” due to shutdowns and limited generation of power plants amid high demand.

” I-rollback at suspindihin na ang excise tax ng TRAIN (Rollback and suspend excise tax under TRAIN),” said the senator, who had voted against the ratification of the law.

Economic managers have consistently thumbed down calls to suspend the implementation of the TRAIN law despite surging prices, saying the long term benefits outweigh the short term disadvantages of higher taxes.

The DOF previously reported that the inflationary effects of TRAIN law was minimal or only 0.4 percentage points of the 4.6% inflation in May. – Rappler.com