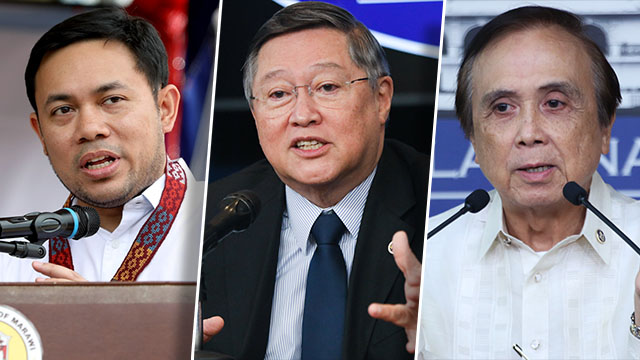 MANILA, Philippines– The government’s Economic Development Cluster and Infrastructure Cluster held a forum on Friday, July 6, to highlight the efforts and accomplishments of the administration in the economy for 2017.

The 3 Cabinet secretaries gave a mostly positive report, portraying an economy that is growing at a fast pace. There were issues, however, that they left out in their talks.

Despite inflation in June smashing government targets and expectations, Dominguez downplayed the figure.

He said various factors, like the rice price increase, are “only temporary.”

“While our inflation rate for the first half of the year went slightly off target at 4.3% due to the rise in prices of rice, fuel, and fish, we see this to be temporary as we transition towards fully implementing important public policy reforms,” Pernia said.

The economic managers said in a joint statement:

While we acknowledge the public sentiment on rising prices, let us remind ourselves that the Train (Tax Reform for Acceleration and Inclusion) Law raised the take-home pay of 99% of income tax payers by an average of 15%, much higher than inflation. The additional revenues that we generated from the Train Law will also allow us to provide free education in state colleges and universities, free irrigation for farmers, conditional cash transfers to poor families ad senior citizens, and higher salaries to government employees including uniformed men. Without doubt, these should help in coping with the rising prices of goods.

The economic managers assured Filipinos they are doing the best they can to pull inflation back to the 2% to 4% target. (READ: Who’s to blame for soaring inflation? ‘All of them’ in gov’t, says economist)

Dominguez stressed that the country’s economy is among the growth leaders in the region, registering 6.8% in gross domestic product (GDP) in 2017.

“This makes the Philippines one of the fastest growing economies in Asia, next to India (7.7%) and Vietnam (7.4%), and at par with China (6.8%). The first quarter performance likewise marks the 10th consecutive quarter we recorded growth of 6.5 percent or higher,” Pernia said.

A day before, however, University of the Philippines School of Economics professor Emmanuel de Dios had asked, “Which countries are we comparing ourselves with?”

“Reports said we are 3rd in ASEAN, but if we include Nepal, Bangladesh, Laos, China, Cambodia, and Vietnam, we are actually just 7th…and 6-point-something percent of GDP is still not good enough,” De Dios said in a forum on democracy and governance organized by the Philippine Center for Investigative Journalism on Thursday, July 5.

De Dios said that the Philippines must “wake up,” as Laos and Cambodia was able to reach 7% way back 2011.

The economist went on to emphasize that people should expect more under the Duterte administration. For instance, he said, that the current administration did not have to deal with current account surpluses, which occurred between 2005 and 2016. Inflation was low before Duterte took office, and poverty incidence was declining.

Dominguez also said that the year-on-year growth in the first 3 months of 2018 reached as high as 43.5%.

However, Dominguez did not recognize that the country dipped 9 notches to the 50th spot out of 63 economies in this year’s World Competitiveness Yearbook rankings of the International Institute of Management Development.

Philippine Chamber of Commerce and Industry president Alegria Sibal Limjoco was previously quoted as saying that the decline should serve as a “wakeup call for government and for business.”

The Philippines’ ranking in the ease of doing business also slipped to 113th this year from 99th last year across the 190 countries covered by an annual World Bank Group report.

De Dios also said that while the country’s FDI was rising, it was still well below comparators.

Villar assured Filipinos that the government’s infrastructure push is moving along and will bring inclusive growth in the country.

The government aims to spend as much as 7.3% of the country’s GDP for infrastructure projects until 2022.

The National Economic and Development Authority recently revealed that 32 of the 75 flagship projects will be completed by 2022, while some 4,909 projects in the provinces throughout the country will have broken ground by then.

However, De Dios in an earlier briefing warned of “leaky-bucket entitlements” – such as the free college tuition, salary increases to the police and military, pensioners, and free irrigation services – that may be taking cash away from the intended infrastructure push.

He also underscored the 2018 inflation surprise, compounded with the “confused” monetary policy and the shortage of cheap rice in the market during the first two quarters of the year.

Based on the data provided by NEDA, only one flagship project has been completed so far and 4 are undergoing construction.

De Dios warned that the government could also have plenty of funds, but might be unable to spend it quickly due to red tape and other obstacles under the ODA setup.

Pernia reported that unemployment rate from the April was down to 5.5% as compared to the 5.7% figure from the same period last year.

“This is the lowest recorded unemployment rate for all the April rounds of the Labor Force Survey in the past decade. This puts the unemployment rate in the first half of 2018 at 5.4%, continuing its downward trend over the years,” Pernia said.

However, Pernia left out the fact that the Philippines missed its goal to cut the jobless rate in 2017, as it shed more than 600,000 jobs.