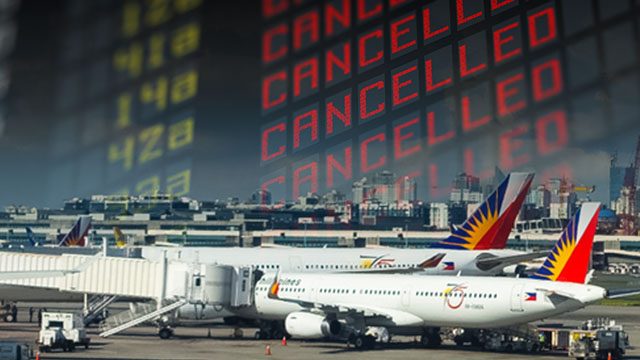 The airport’s runway was eventually reopened past 11 am on Saturday, August 18, but the incident triggered “excessive” flight delays and cancellations. (LOOK: Crowded NAIA after runway reopening)

Below are the canceled flights for Sunday.

In separate advisories, both Philippine Airlines (PAL) and Cebu Pacific said there is no need for affected passengers to go to the airport.

PAL said its ticket offices nationwide will be open from 9 am to 5 pm on Sunday to process rebookings and refunds.

PAL passengers can also call hotline number 8558888 or visit the airline’s ManageMyBooking portal on its website.

Cebu Pacific, meanwhile, said its passengers can opt for any of the following, without penalties:

Cebu Pacific said the fastest way to rebook or seek a refund is through the Manage Booking section of the airline’s website. Passengers can also call hotline number 7020888.

Cebu Pacific added: “To ease the process, we are allowing passengers with flights to and from NAIA Terminal 3 between August 17 [and] 21, 2018 to inform us of their preferred option even after their original flight schedule. They may send us a message on our official Facebook and Twitter accounts.”

Transportation Secretary Arthur Tugade said on Saturday that the runway’s temporary closure was an “eye-opener” for airport authorities, and a “reminder” for them to “take a second look” at protocols of agencies and airlines.

“I am sorry. We did our very best to address the situation,” Tugade also said. – Rappler.com