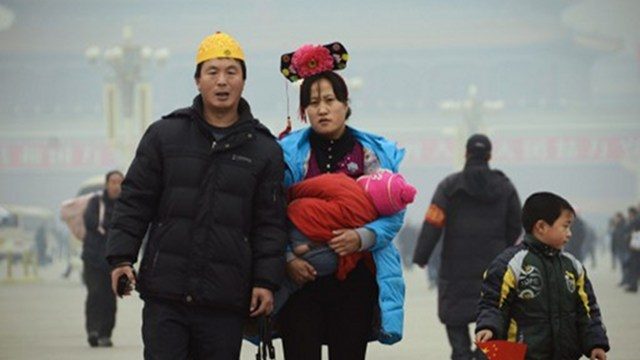 BEIJING, China (UPDATED) – China’s economy grew at its slowest pace for 9 years in the 3rd quarter, as a campaign to tackle mounting debt, and trade frictions with the US take their toll.

The reading will likely put pressure on the leadership to provide fresh support as investors grow increasingly concerned about a flood of cash out of the country, which has seen the yuan and stock markets fall to 4-year lows.

The world’s second largest economy expanded 6.5% on-year in July-September, National Bureau of Statistics figures showed, in line with an Agence France-Presse (AFP) survey, but marking the worst performance since the start of 2009 at the height of the global financial crisis.

It is also well down from the 6.8% and 6.7% in the previous two quarters but in line with Beijing’s target for the year.

China is in the midst of a increasingly bitter trade row with the United States, with both sides exchanging tariffs on hundreds of billions of dollars worth of goods that have fanned fears about the impact on the global economy.

But the standoff comes at a tough time for Beijing, which is battling to tackle a mountain of debt, with credit tightening and infrastructure investment falling.

And while exports to the US have held up so far, trade frictions have sapped confidence.

As a result, Shanghai’s composite stock index has fallen by about a third from its January high, while the yuan has slipped about 9% against the dollar.

In response, 3 of China’s top financial officials, including the head of the central People’s Bank of China, made a concerted effort Friday morning, October 19, to reassure investors and to stem the market sell-off that one of them called “abnormal”.

Adding to concerns was data showing fixed-asset investment growth remains bogged down. It inched up to 5.4% in January-September from a record-low 5.3% in the first 8 months as Beijing reined in spending on bridges, railways, and highways this year.

Spending appears to be bottoming out thanks to the recent step up in local government borrowing, said Julian Evans-Pritchard of Capital Economics.

But he added: “Looking ahead, we doubt the latest pick-up in infrastructure spending will be enough to prevent the economy from cooling further in the coming quarters.”

Analysts say the slowing growth could prompt an end to Beijing’s fiscal prudence, while the gloomy export picture has reinforced the need for China to rely on its legion of consumers to grow its economy.

While September retail sales, a key indicator of domestic demand, saw a slight improvement from August, output at China’s factories and workshops slowed, according to the NBS.

“We expect further escalation of US-China trade tensions going into 2019, which will likely be partially offset by yuan adjustment and more growth-supportive fiscal and monetary policies,” JPMorgan economists led by Zhu Haibin, said in a note.

Relations between the world’s two largest economies have soured sharply this year, as US President Donald Trump turned to hiking tariffs to force concessions in trade negotiations with Beijing.

Washington has hit roughly half of Chinese imports while Beijing has responded in kind.

Exports still drive a significant chunk of China’s economy and Washington’s targeting of cars, machinery, electronics, consumer appliances and other products have led many firms to shift production out of the country, or begin considering it.

Uncertainties are mounting abroad, said Mao of the statistics bureau.

“There are still many unknowns with China-US trade frictions, so the economy will face some downward pressure,” Mao said.

Exports to the US have held up in the first 9 months of the year as firms rushed shipments across the Pacific to beat tariffs – but economists expect to see an impact in coming months and on into next year.

“If the market becomes a bit panicked… that can dampen investment, investment and trade are closely linked so this can be a vicious cycle,” said Lian Weicheng, an economist at the International Monetary Fund during a briefing Thursday, October 18, in Beijing.

Bloomberg News contributed to this story