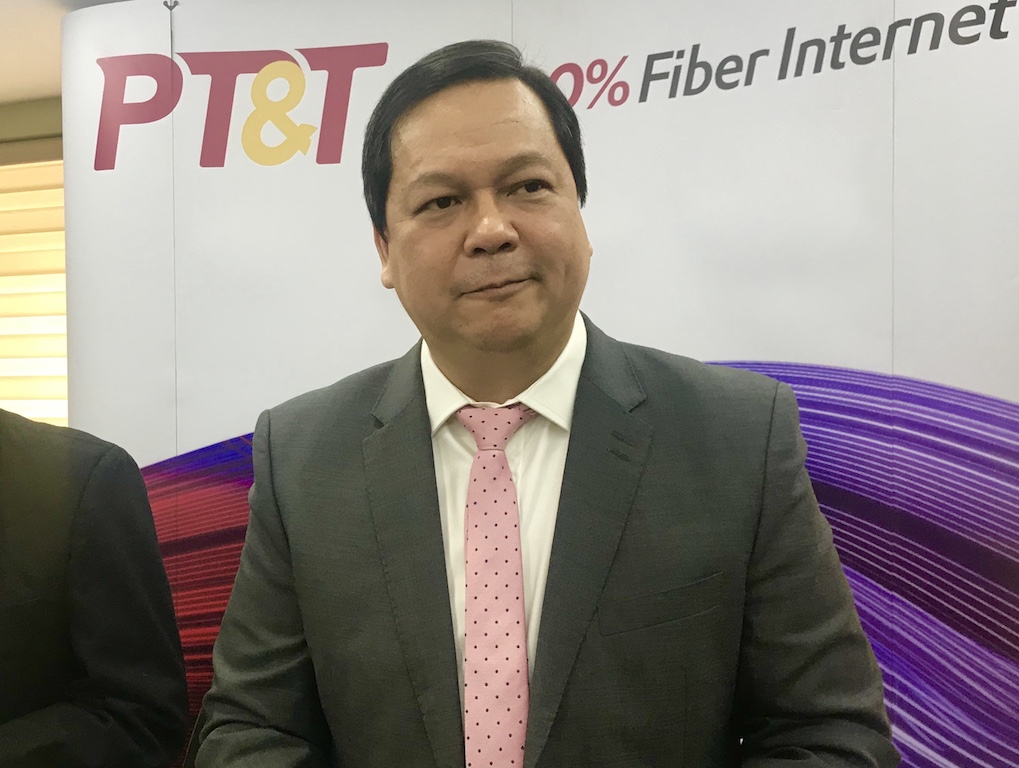 MANILA, Philippines – Just a day before the bidding for the 3rd major telecommunications player slot, the Philippine Telegraph and Telephone Corporation (PT&T) asked the court to clarify a provision in the selection process.

In a press briefing on Tuesday, November 6, PT&T president and chief executive officer James Velasquez said they filed a petition for declaratory relief before the Makati City Regional Trial Court over a requirement of the National Telecommunications Commission (NTC).

PT&T asserted that it should be given a certification by the NTC that it has been conducting operations on a national scale for the last 10 years. The certification is among the essential requirements for a company to be able to participate in the bidding process on Wednesday, November 7.

“We believe that the NTC’s refusal to issue the said certification is without basis since it is premised on a restrictive interpretation of the term ‘national scale’ as it heavily favors foreign telecommunications companies who want to participate in the 3rd telco bidding,” Velasquez said.

Specifically, PT&T is contesting the NTC’s pronouncement that a foreign telco’s “regional operations” in its home country can be considered as “national scale,” but the same cannot be said for local companies.

The rules state that local bidders should have operations in Luzon, the Visayas, and Mindanao to be considered as having national-scale operations.

“This means that the foreign telecommunications companies are not required to have operated or offered their services in the entire country of [their] operations,” Velasquez said.

He went on to say that the selection process is “anti-Filipino” and “discriminatory” against local players. (LIST: Potential 3rd telco bidders)

According to PT&T, it has been in operation for 56 years. It is currently operating in the Greater Manila Area, Northern Luzon, and Southern Luzon.

The NTC refrained from commenting on the petition as it has already been filed before the court.

PT&T is the second company to seek assistance from the court to handle bidding concerns. NOW Telecom filed a case against the NTC over alleged “money-making” schemes in the terms of reference for the bidding.

Despite taking its concerns to court, PT&T said it will still participate in the bid and will not seek the postponement of the process.

The company added that it has enough funds to finance the bid.

On November 5, PT&T was able to secure from the Securities and Exchange Commission (SEC) the approval of the increase of its authorized capital from P3.8 billion to P15.6 billion. This includes the SEC’s approval of the company’s debt-to-equity conversion amounting to P8.7 billion.

This brings the company’s paid-up capital to P10.9 billion, which complies with the requirement for the 3rd telco bidding.

PT&T was also able to secure a letter of credit amounting to P700 million from the Asia United Bank. Velasquez said the amount will serve as the company’s bid security.

With all the financial hurdles conquered, Velasquez hopes that the court would favor them for a smooth bidding process on Wednesday.

They have yet to disclose whether they have a foreign partner for the bid.