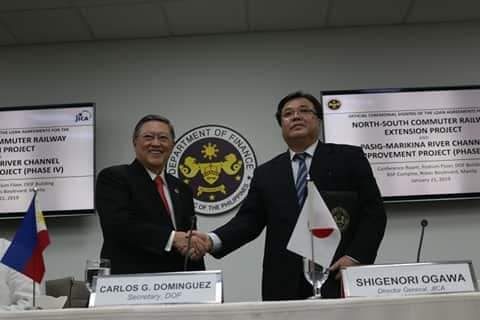 The total cost of the project amounted to P628.42 billion ($12.03 billion). JICA and the Asian Development Bank will finance the total loan financing requirement at P488 billion ($9.34 billion).

Dominguez said on Monday that the economic benefits of improved mobility once the railway service is completed “will translate into many times over the cost of the project.”

“This commuter rail service ought to have been built many years ago. This might have spared our harried commuters all the grief they bear now,” Dominguez said.

Dominguez said that the NSCR project has the “fastest loan processing time” in the history of the Philippines-Japan cooperation.

In November 2018, the National Economic and Development Authority (NEDA) Board Investment Coordination Committee-Cabinet Committee (ICC-CabCom) approved the changes in scope of the 147-kilometer railway system, which included a 76% increase from the previous total costing estimate of P440.88 billion.

The increase in costing was due to a shift in engineering design, increase in the number of trains, and added costs that will cover resettlement activities for the 12,901 informal settler families.

This is the second railway loan deal with Japan under the Duterte administration. JICA will also be financing the P18-billion Metro Rail Transit Line 3 (MRT3) rehabilitation.

The railway will “seamlessly” integrate the Philippine National Railways (PNR) lines from Central Luzon to Calabarzon:

The extension project covers PNR Clark 2 and PNR Calamba lines. Previously, the government had inked a $2.37-billion loan from Japan for the PNR Clark 1 deal in November 2015.

Batan said that the NSCR “is more than just another railway,” with less travel time from the provinces to Metro Manila.

“The NSCR is more than just another railway project, as it promises to deliver a new way of life to the millions of Filipinos that it will benefit,” Batan said.

Initially, the NSCR project was planned to be under a public-private partnership under the Aquino government.

The Duterte administration had called off the auction in 2016. – Rappler.com