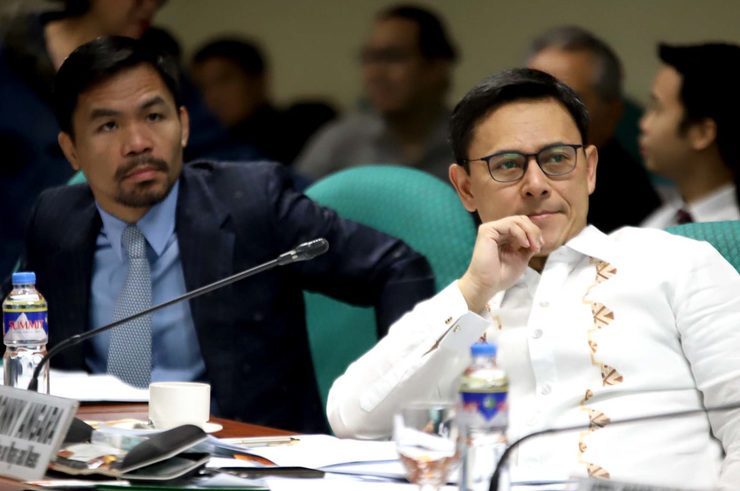 Facebook Twitter Copy URL
Copied
While both tobacco and alcohol saw excise tax hikes back in 2012, the Department of Finance says alcohol lags behind in revenue contribution

MANILA, Philippines – The Department of Finance (DOF) urged lawmakers to speed up the passage of Senate Bill No. 2197, which seeks to increase excise tax on alcohol.

During the Senate ways and means committee hearing on Wednesday, February 6, Finance Undersecretary Karl Kendrick Chua said that while both tobacco and alcohol saw excise tax hikes back in 2012 when Republic Act No. 10351 or the sin tax law was passed, tobacco has contributed more revenues than the latter.

“Compare that to tobacco [which earned a revenue of] P124 billion. Alcohol [takes up] 33% of the total sin tax,” Chua said.

“Our recommendation is to speed up the passage of the alcohol excise tax hike because it’s getting left behind,” he added in a mix of English and Filipino, noting that tobacco saw a faster increase in excise tax given the first package of the Tax Reform for Acceleration and Inclusion (TRAIN) law.

Ideally, revenue from alcohol excise tax is supposed to take up 40%, while tobacco fills up the remaining 60%. (READ: Duterte agrees to certify bill on higher cigarette, alcohol tax as urgent)

To catch up, Chua said the proposal of the DOF and the Department of Health (DOH) for alcohol excise tax is projected to reap P236.6 billion from 2019 to 2023.

In 2019 alone, the DOF and DOH’s plan is projected to generate P32.3 billion, higher than the estimated P7.9 billion from the proposal in the House of Representatives.

This revenue is expected to provide additional funding for the Philippine Health Insurance Corporation (PhilHealth) and cover the remaining gap needed to implement the universal health care bill, while discouraging excessive alcohol intake especially among the poor and the youth.

Most of all, Health Undersecretary Rolando Enrique Domingo said during the hearing that their “concern is the young men, who have 7 to 8 cases of death every day from alcoholic intoxication” while driving vehicles or motorcycles.

Domingo also pointed to crimes committed as a result of being drunk.

PhilHealth Director Anthony Leachon said more alcohol drinkers prefer spirits over beer, because it is easier for them to get intoxicated.

“With [the] increasing number of [people with] obesity, some tend to shy away from the calories in the beer and tend to go to spirits with the [high] alcohol level,” he added.

Leachon also noted that a number of the patients he attends to everyday would spend around P100 for beer and cigarettes before buying food such as rice, sardines, and cup noodles.

“So one-fifth or 20% of their wage earned will be for their happiness, their vices, particularly alcohol and tobacco…. Ang gusto nila ay madali silang malasing para makatulog (What they want is to easily get drunk enough to fall asleep) so they can work early in the morning,” he added.

Citing a report by the Institute for Health Metrics and Evaluation, the DOF’s presentation showed that alcohol, which ranks as the 7th leading cause of death, is the leading factor for mortality for those 15 to 29 years old.

Under the DOF and DOH’s proposal, excise tax for fermented liquors, or beer, will jump from the current P25.42 per liter to P40. Another P5 will be added per year until 2022 as a 10% annual indexation rate will be imposed starting 2023.

As for distilled spirits, a 25% ad valorem rate will be imposed on the net retail price while its specific tax per proof liter will increase to P40 from P23.40. Like fermented liquors, it will see a P5 increase per year until 2022, then a 10% annual indexation rate will be imposed in the following year.

Still wines and carbonated wines with more than 25% alcohol content will be taxed as distilled spirits.

Under the proposal, sparkling wines, champagnes, still wines, and carbonated wines will already be subject to 10% indexation annually by 2020. – Rappler.com