Arroyo on PH-China economic ties: Better than ever 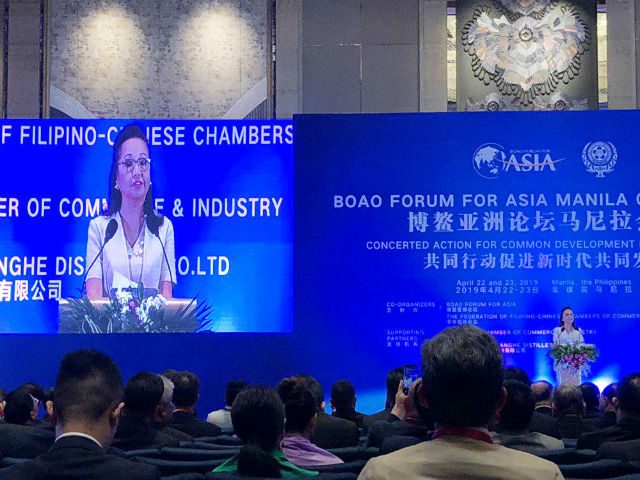 MANILA, Philippines – Speaker Gloria Macapagal Arroyo on Tuesday, April 23, heaped praises on the Philippines’ growing economic and trade ties with China, as she encouraged Chinese businessmen to continue investing in the country.

The former president made the call in her keynote speech on the second day of the Boao Forum for Asia (BFA) Manila Conference at the Shangri-La at the Fort, Manila hotel in Taguig City.

“Clearly, the economic and trade cooperation between our two countries is as good as it has ever been – better than it has ever been, in fact,” she added. (READ: Arroyo: ‘World should look at China’s rise as an opportunity, not a threat’)

Arroyo is a member of the board of directors of the BFA, a non-profit organization based in Hainan that gathers leaders from government, business, and the academe in Asia and other countries to discuss pressing issues in the region.

It was upon the invitation of the Pampanga 2nd District congresswoman that the BFA forum was brought to Manila to bring more Chinese investors to the Philippines.

In the same speech, Arroyo recalled how the Philippine business community was “elated” during the state visit of Chinese President Xi Jinping in November 2018, when the Philippine and China signed a total of 29 agreements. (READ: Arroyo praises China, recalls presidency at Xi Jinping meeting)

“The thing to focus on now is the implementation side. On the part of the Philippines, we know that we have to exert maximum effort to remove all the ground bottlenecks that impede the implementation of projects that involve trade and investment groups in China,” said the former president.

Pivoting towards China is an international policy decision shared by Arroyo and President Rodrigo Duterte. (READ: Arroyo: Philippines can be ‘friends’ with both China, U.S.)

Under the Duterte presidency, Chinese investment pledges in the Philippines soared by a whopping 2,072% in just a single year. Data from the Philippine Statistics Authority revealed that the total approved foreign investments from China totaled P50.7 billion in 2018, with the highest surge reported in the 4th quarter at P47.98 billion.

China a ‘class of its own’

In the same speech, Arroyo described the Asian economic giant China as being on a “class of its own” and a “parter in development” in Southeast Asia, especially among developing nations in the region. (READ: China should be ‘Big Uncle’ to ASEAN, says Arroyo)

Arroyo said that when she first entered government as assistant secretary at the Department of Trade and Industry in the 1980s, she and her colleagues then were already wondering if China would become “Southeast Asia’s chief competitor in the world market.”

“Little did we realize then that China is on a class of its own. Now today, we see it. That rather than a competitor, China has proven to be a partner in development. It is a market for Southeast Asia and its developing countries. It is a donor, it is a provider of capital and technology,” said Arroyo.

Arroyo also previously said China should consider itself a “Big Uncle” to smaller countries in the Association of Southeast Asian Nations.

Arroyo’s close ties to China dates back to her 9-year presidency. Compared to her predecessor Benigno Aquino III, Arroyo was “considerably more receptive” to Beijing’s commercial incentives and was “apparently willing to compromise” the country’s claims, according to an International Crisis Group report. (READ: Why China chose Arroyo over Aquino)

During her term, she agreed to a joint exporation of the West Philippine Sea (South China Sea) with China, which later included Vietnam. Critics of the JMSU alleged that Arroyo had committed “treason” by allowing it.

The exploration deal – the Joint Marine Seismic Undertaking – lapsed in 2008, but several lawmakers had filed a petition before the Supreme Court that same year to declare it as unconstitutional, to prevent it from happening in the future. The High Court had yet to decide on the nearly 11-year-old petition. – Rappler.com