Business groups in favor of easing restrictions on foreign investments 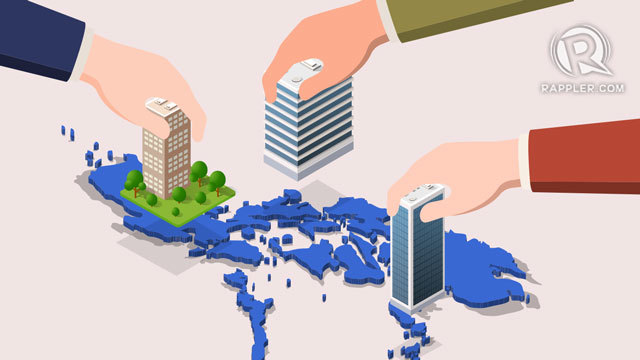 MANILA, Philippines – Several business groups are backing moves to amend the 1987 Constitution’s provisions which limit the participation of foreign investors in the country.

On Wednesday, September 25, charter change became alive once again in the House of Representatives after the committee on constitutional amendments began tackling the economic provisions of various resolutions seeking to amend the Constitution.

One common proposal is to ease the constitutional restrictions on foreign investments – either by completely removing the requirement that at least 60% of public utility enterprises’ capital stock must be owned by Filipino citizens or corporations, or by giving Congress the power to pass a law that would allow this.

Former finance secretary Margarito Teves, who is now with the Foundation for Economic Freedom (FEF), said the restrictions are “binding constraints” to economic growth.

“We in the Foundation for Economic Freedom strongly support amendments to the 1987 Constitution, particularly the restrictive economic provisions that have, for decades, served as  binding constraints to economic growth and development,” said Teves.

“We believe the removal of the restrictive economic provisions would make a much more significant difference in the lives of Filipinos. It gives a clearer signal  to our investors that they are indeed welcome to invest and do business in the Philippines,” added the former Cabinet official.

He said the FEF is also backing the bills that would allow foreigners to practice their professions in the Philippines and also own public utilities here.

John Forbes of the American Chamber of Commerce believes the Philippines has “tremendous investment potential,” but the country is lagging behind in foreign direct investments (FDIs) compared to its Southeast Asian neighbors like Vietnam, Indonesia, Singapore, and Malaysia.

This was supported by a graph shown by FEF fellow Gary Olivar, who presented data from the World Bank showing the Philippines has the lowest FDIs in the region.

Coco Alcuaz, executive director of the Makati Business Club, likewise said their organization is “for opening up the economy.”

“I travel all over the world, 30 times a year probably, meet with high-level people. Something is happening in the world, in [the] US, in Europe, everywhere. There is a nationalist pullback, pushback,” said La Viña, who also teaches in 11 law schools in the country.

“If we do this now or in the next 2 to 3 years, we are going to unilaterally surrender our weapons against that nationalist pushback. That’s very, very dangerous, Mr Chairman. I say that with a very strong sense of urgency. Very, very dangerous if we unilaterally disarm ourselves from all our legal options,” he added.

In the previous 17th Congress under the leadership of then-speaker Gloria Macapagal Arroyo, the House approved a resolution seeking to shift the Philippines to a federal system of government. But it was deemed “dead on arrival” in the Senate.

President Rodrigo Duterte did not mention charter change in his 4th State of the Nation Address last July, but his administration’s programs to promote federalism and work towards charter change are still being pushed. – Rappler.com