Facebook Twitter Copy URL
Copied
Aside from the extreme congestion in Metro Manila, the Asian Development Bank says too many government agencies have overlapping functions

MANILA, Philippines – A study by the Asian Development Bank (ADB) ranked Metro Manila as the most congested city out of all 278 cities in developing Asia.

The ADB found that out of the cities with a population greater than 5 million, the Philippine capital’s transport system impeded mobility of commuters the most and had a congestion value of 1.5. The average congestion of all sampled cities was at 1.24.

Other congested cities include Kuala Lumpur in Malaysia, Yangon in Myanmar, Dhaka in Bangladesh, Bengaluru in India, and Hanoi in Vietnam.

The report noted that while cities bring people together and enhance industries, congestion gets in the way of further development. (READ: [ANALYSIS] What Duterte doesn’t get about Metro Manila traffic) 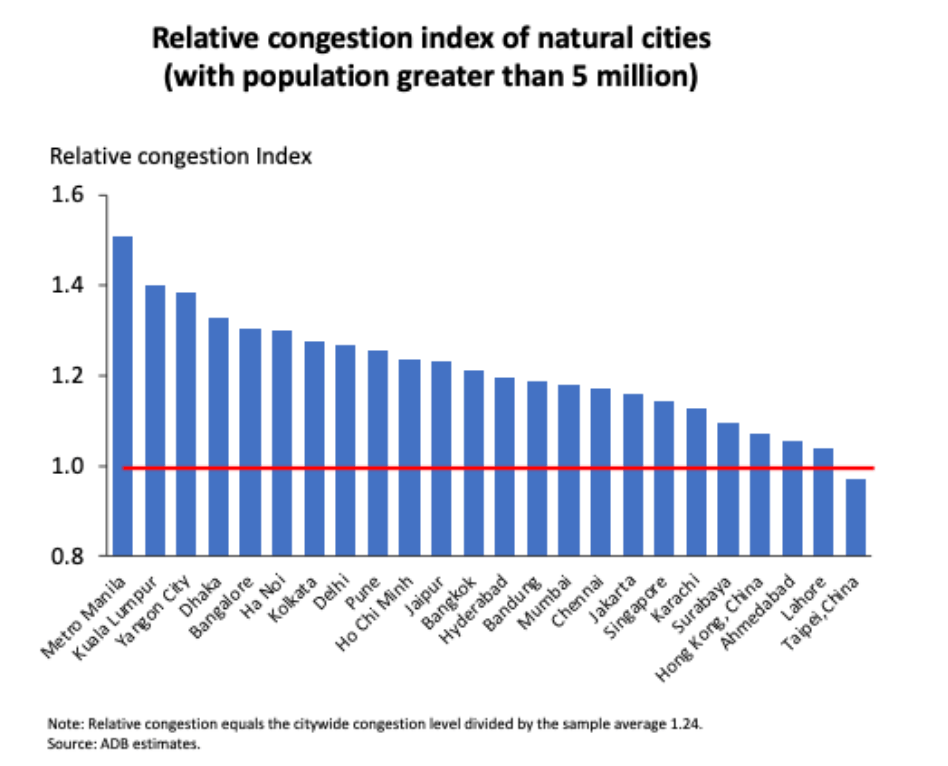 The ADB came up with the ranking by collecting projected trip data from Google Maps for 278 cities in 28 regional economies with populations greater than half a million. The ADB then identified a number of hotspots in terms of luminosity and population to determine where people lived.

The ADB found that riding public transport was 3 times longer than using cars.

Researchers also noted that 25% of the surveyed trips could not even be made by public transport.

ADB researchers also pointed out that urban transport reflects how governments manage a city. They said that in the case of the Philippines, too many government agencies have overlapping functions.

“An estimated 31 national government agencies or more, and many more local bodies, are involved in delivering urban services. Overlapping mandates and duplicated functions are common, undermining interagency amity and coordination,” the report said.

Moreover, the study found that a lack of efficient and affordable public transportation causes urban congestion.

“When you build public transport, you want development to be around public transit, in terms of high density, and making sure that those areas are walkable and have easy access to transport,” he said.

Abiad added that congestion makes it hard for workers to get to jobs and firms to connect to customers, so the benefits of urbanization are harder to reap.

Despite the high capital investment required, the economic benefits of rail mass transit are said to outweigh cost considerations.

The report also noted that while privately-run mass transportation has a role to play in urban transport systems, it should be regulated and coordinated under a government agency. – Rappler.com