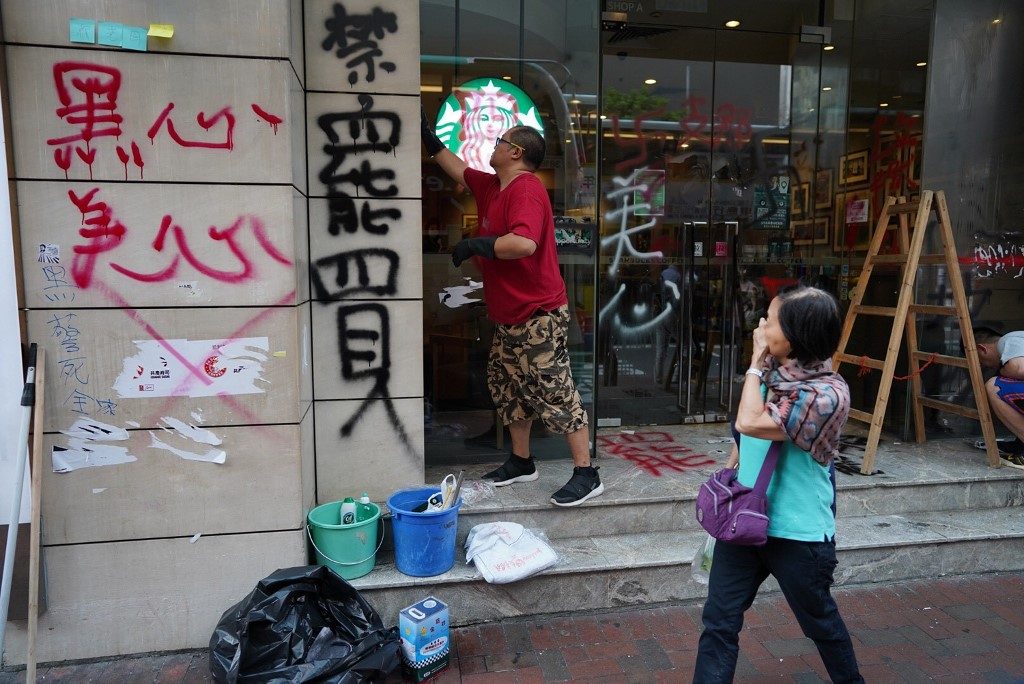 HONG KONG – Starbucks has emerged as the latest brand to fall foul of Hong Kong’s pro-democracy protesters after a family member of the local restaurant chain that owns the local franchise spoke out against demonstrators.

Multiple branches were covered with graffiti over the weekend as the city convulsed with some of the most intense clashes between hardcore protesters and riot police in weeks.

One cafe in the district of Wanchai was daubed with slogans saying “boycott” as well as insults to the police and Maxim’s Caterers, a major Hong Kong restaurant chain that runs Starbucks outlets in the city.

The vandalism illustrates the huge pressures on international brands as Hong Kong is shaken by its worst political unrest in decades.

Beijing is piling pressure on businesses to publicly condemn the protests.

Those that do risk a protester backlash, but staying silent risks financial punishment on the mainland, a far more lucrative market.

The boycott campaign against Maxim’s snowballed after Annie Wu, the daughter of Maxim’s wealthy founder, delivered a speech earlier this month in which she condemned the protests and said Beijing’s hardline stance against democracy advocates should be supported.

She was speaking at the UN’s human rights council in Geneva alongside Pansy Ho, a billionaire casino magnate who made similar calls.

Their comments were seized on by protesters and portrayed as an example of how Hong Kong’s wealthy elite are out of touch with public sentiment and in the pockets of Beijing.

Prominent democracy campaigner Joshua Wong was among those calling for a boycott of Starbucks since Wu’s speech and more than 50,000 people have signed a petition asking the Seattle-headquartered company to sever ties with Maxim’s.

“We herein urge the Board of Directors to consider whether Maxim’s truly represents the social values of Starbucks and terminate the franchise to Maxim’s immediately,” Wong wrote on Twitter on Friday.

Maxim’s did not respond to requests for comment on Monday but it has previously issued statements distancing itself from Wu’s comments and saying she is not employed by the company.

Other major brands have been rounded on by protesters, either for pro-Beijing comments made by owners or because the owners themselves are linked to the Communist Party in China.

Yoshinoya, a popular noodle chain, and Genki Sushi – also owned by Maxim’s – have been repeatedly tagged with graffiti along with Bank of China branches.

Brands deemed to be sympathetic to protesters have also had a torrid time and faced boycotts on the mainland.

Authorities in China tore into Cathay Pacific after staff joined protests, forcing the company to go through stricter regulatory checks.

The moves led to major staff changes on Cathay’s board, including the resignation of its CEO, as well as multiple staff being fired for expressing pro-democracy sentiments, something some employees have described as a “purge”. – Rappler.com