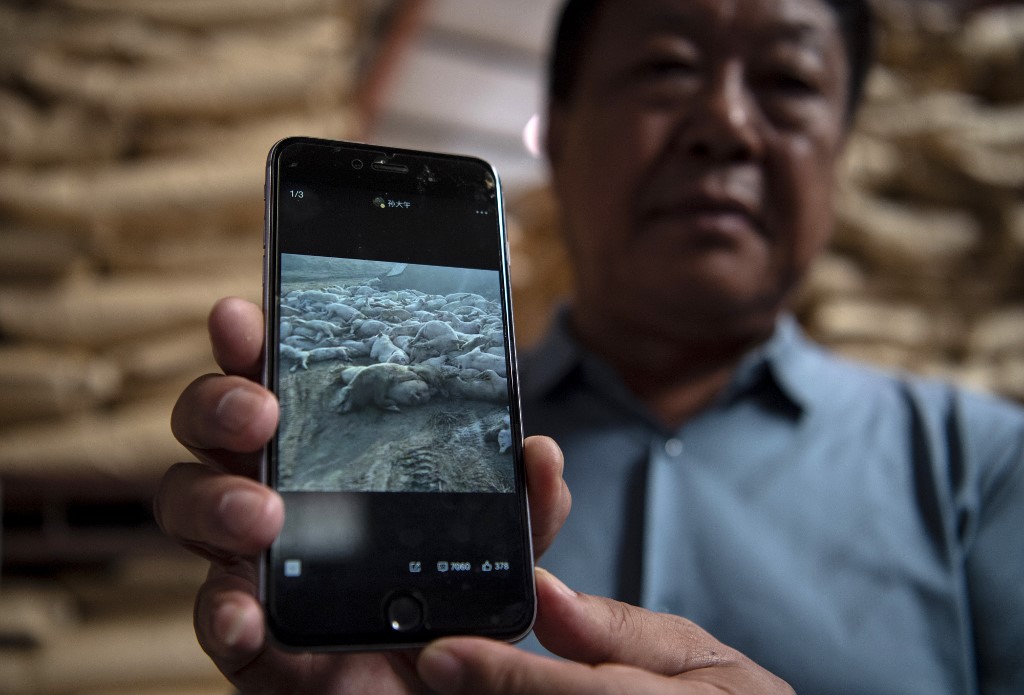 BEIJING, China – Sun Dawu sighs sadly when asked about the death of thousands of his pigs, killed by the African swine fever outbreak that has been decimating hog herds across China.

“The pig farm was completely destroyed,” he said quietly, fanning himself from the heat and flies on his large Hebei province farm outside Beijing.

“It’s a painful process, it’s painful to watch them die. We buried all the dead pigs 5 meters (16 feet) underground.”

More than a year since swine fever began to spread across the country, China’s pig farmers are wary of replenishing their stock – and the disease could become a political and economic liability for the government.

Frustrated after a month of official stonewalling, Sun posted pictures of the dead pigs on social media platform Weibo – quickly attracting tens of millions of views and forcing the local government to respond.

Pigs that were not killed by the fever were culled.

Eight months later, his restocked herd is healthy, but under government restrictions his pig farm is still sealed off.

His livestock is quarantined and can’t be sold for consumption until at least the 2nd half of next year.

China’s swine herd is down by about 40%, and the shortage has pushed prices of the country’s meat staple up by at least half.

A Rabobank report warned China could lose 200 million pigs during the epidemic, and Sun said he believed the number of those affected is higher than official estimates.

“Some pig farmers dare not declare sick pigs, so they quietly sell off even dead pigs,” he said.

By the time swine fever broke out on his farm and killed his herd of 15,000, Sun said “all the pigs of the other farms were dead.”

But only one case of swine fever has been officially reported in Hebei, according to the agriculture ministry – Sun Dawu’s farm.

The province was declared free of the disease in April.

The shortage is being exacerbated by stuttering imports from the United States in a painful trade war.

And as it wears on, it is not just a problem for farmers, but also for the country’s leaders – afraid of social repercussions and spiraling economic costs.

Beijing has implemented several measures to boost the pig population, including subsidies of up to 5 million yuan ($700,000) for breeders.

They also announced in September that new large-scale breeding bases were being built in southwest Sichuan province with the capacity to produce two million pigs a year.

But farmers contacted by Agence France-Presse (AFP) – reluctant to be identified – were afraid to raise new herds despite government subsidies, fearing that any trade deal between Beijing and Washington would undercut Chinese producers or that their hogs would be taken away again.

“When the trade war between China and the US ends, the government will start to import large quantities of foreign pork and Chinese farmers will have no profit,” a Hebei farmer surnamed Zhang told AFP.

In a bid to keep a grip on escalating prices, the government auctioned 30,000 tons of pork from its strategic meat reserves ahead of the National Day holiday.

Officials insisted in September that there was sufficient supply and prices would now be stable.

But given the slowing economy and the trade war, “pork-driven inflation has further limited the government’s options,” said Shih.

“We should just eat the pig feed, it will be healthier,” wrote one social media user after a front-page article in the state-run People’s Daily extolled a vegetarian lifestyle.

Farmers also accuse governments of not doing enough to tackle the crisis, particularly local authorities that don’t want to fork out compensation to farmers.

Sun started as a farmer 3 decades ago with 50 pigs, but now runs a large business that he said can absorb the shock of his losses – hundreds of millions of yuan in total.

But others are not so lucky.

“Some pig farms just lost too much to rebuild,” Sun said. – Rappler.com