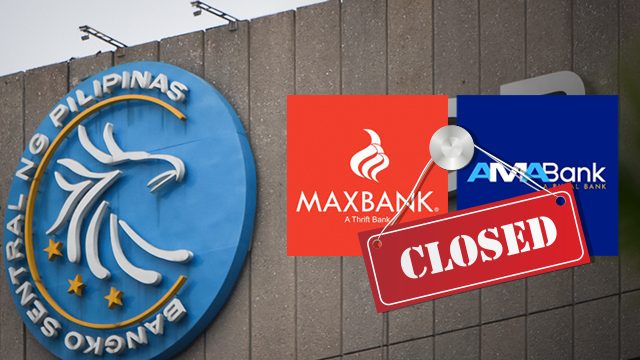 MANILA, Philippines (UPDATED) – The Bangko Sentral ng Pilipinas closed down the AMA Rural Bank of Mandaluyong and the Maximum Savings Bank, with the Philippine Deposit Insurance Corporation ready to serve valid claims by the banks’ depositors.

In a statement on Saturday, November 9, the Monetary Board, the policy-making body of the BSP, has “prohibited” the two banks from doing business in the country, pursuant to Section 30 of Republic Act No. 7653 or the New Central Bank Act.

Under the law, banks may be placed under receivership and liquidation proceedings if it has insufficient realizable assets, as determined by the BSP, to meet its liabilities.

The BSP said that the total assets of the bank are equivalent to only 0.02% and 0.002%, respectively, of the total banking system.

“The closures of AMA Rural Bank of Mandaluyong, Inc. and Maximum Savings Bank, Inc. are not expected to adversely affect the Philippine banking system considering their relatively small size,” the BSP said.

Ama Rural Bank of Mandaluyong has 10 branches around the Philippines, with its head bank located at Mandaluyong City.

Maximum Savings Bank, meanwhile, has 3 branches in Luzon with its main office located at Batangas City.

“The overall Philippine banking system remains sound and stable with ample liquidity and high level of capitalization as BSP continues to promote good governance among its supervised institutions to ensure the soundness of the banking system and to protect the interest of the banking public,” BSP said on Saturday.

The BSP said that the PDIC is now ready to process claims from depositors of the closed banks. Under the law, the PDIC provides a maximum insurance coverage of P500,000 per depositor per bank.

In a statement on Sunday, November 10, AMA said that it will challenge the shutdown order from the Central Bank.

“AMA Bank assures our clients, employees, and stakeholders that we are fit to operate in every capacity. We challenge the closure as unreasonable,” it said.

“Guided by legal measures, we are exploring all possible courses of actions to resume our full operations and continue to serve you,” it added.

AMA Rural Bank said that it has a total resources of P2.76 billion as of end-September and was considered as the 15th largest rural bank in the Philippines. It has a net loan portfolio of P1.9 billion, which was mostly teacher salary loans.

AMA said that the bank was “liquid” with the shareholders injecting additional P405 million capital and a total deposit due from BSP and other banks amounting to P246 million.

Under the BSP Charter, banks can file a petition for certiorari on the ground that the action taken was in lack or excess of jurisdiction or grave abuse of discretion. Stockholders need to file the petition through proper courts within 10 days from receipt of the BSP order. – Rappler.com