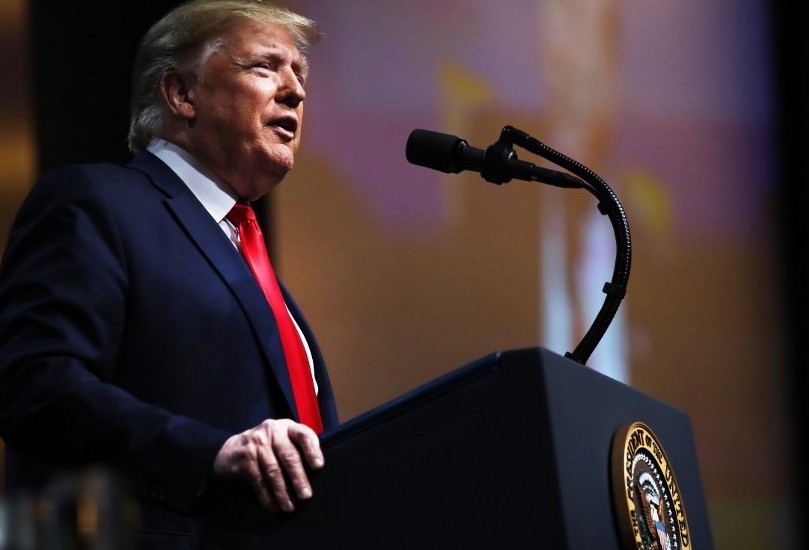 WASHINGTON, USA – United States President Donald Trump on Tuesday, November 12, took credit for an American economic renaissance but was greeted by another salvo from US industries that blame his trade wars for jeopardizing employment, wounding business, and burdening consumers with higher costs.

While he said the partial trade deal he announced last month with China was “close,” he warned he would jack up tariffs even further should the pact fail to materialize.

“A deal could happen soon,” Trump said following an address to the Economic Club of New York. “We’ll only accept a deal acceptable for Americans.”

But a report released simultaneously by the Port of Los Angeles flatly contradicted the White House message that the United States is easily weathering Trump’s multi-front trade conflict.

It warned that the trade wars threaten almost 1.5 million jobs across the United States which depend on the movement of goods through ports in southern California that are heavily reliant on trade with China.

“Some regions and industries are already feeling the pain and the damage to jobs, income, and tax revenue could be crippling down the road,” Gene Seroka, executive director of the Port of Los Angeles, said in a statement.

Higher import costs and lost markets also pose a risk to $186 billion in annual merchandise trade through the ports and will burden consumers with billions of dollars in price increases, it said.

As of last month, cargo volume at the ports is down more than 19% compared to October of last year, the report said.

Complaints from US business have become louder this year as the trade war has dragged on while farms and factories fall on hard times.

Trump launched his trade battle with China last year, accusing Beijing of trying to dominate industries across the globe through subsidies, theft of intellectual property, and other practices.

There is no uncertainty?

Companies were relieved when Trump last month announced a substantial “phase one” deal with Beijing but details have been scarce and there is no word on when the agreement will be signed.

And Washington has sent conflicting signals that have confused investors.

“If we don’t make a deal, we’re going to substantially raise those tariffs,” Trump said Tuesday.

But economists warn the trade war has begun to rattle the global economy, which is suffering a general slowdown, and also hit the United States, eroding exports and business investment, sending manufacturing into decline and helping put the brakes on hiring.

The International Monetary Fund said last month the trade wars are likely to shave 0.8% off global growth next year and was eating into business investment in the United States.

Trump appeared to acknowledge some industries might have suffered due to “a little bit perhaps the uncertainty of trade wars.”

But he hastened to add, “but there is no uncertainty,” and said “The real cost… would be if we did nothing.”

The economic powers have so far slapped tariffs on almost a half-trillion dollars in US-China trade.

Trump last month held off on a round of tariff increases and White House officials have suggested in recent days that as part of the current deal he could delay new tariffs planned for mid-December.

Those duties would raise costs for highly popular consumer electronics including Apple’s iPhones.

The nation’s largest container port complex, which includes the ports of Los Angeles and Long Beach, handles $380 billion in two-way cargo, with China accounting for 54% of imports and 29% of exports, according to the study.

The most vulnerable agricultural states which ship through the port include Republican strongholds like Kansas, Texas, and Louisiana as well as electoral battlegrounds such as Ohio and Arizona, according to the report.