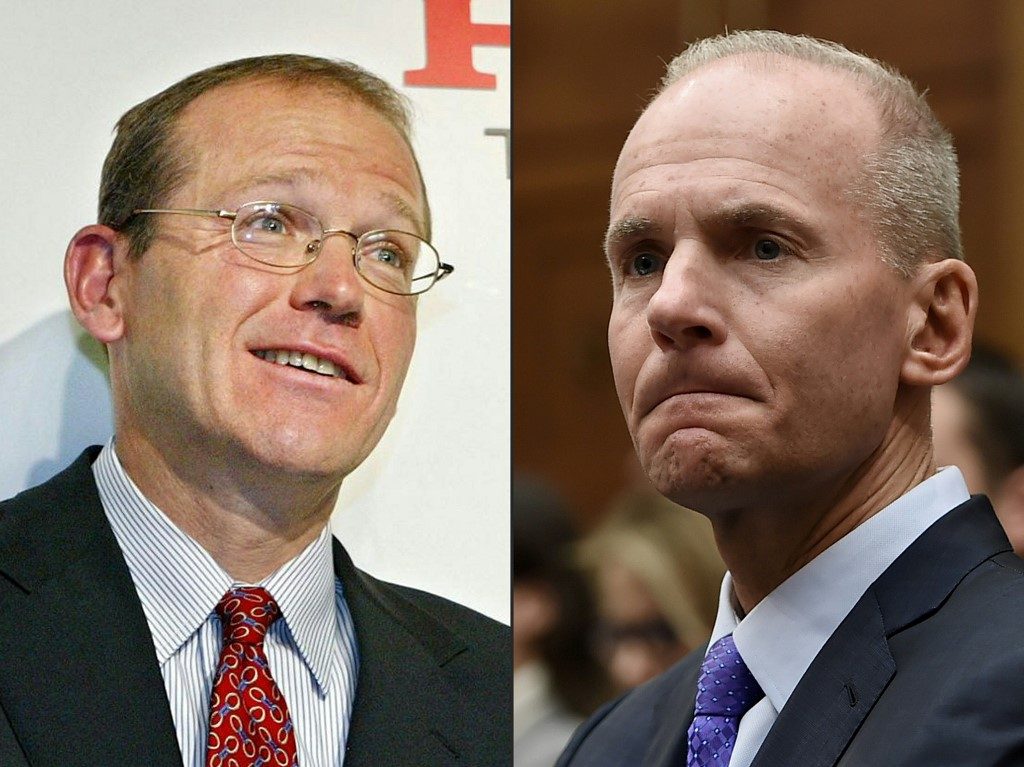 Facebook Twitter Copy URL
Copied
Boeing says it needs to 'restore confidence' and 'repair relationships with regulators, customers, and all other stakeholders'

NEW YORK, USA – Boeing on Monday, December 23, pushed out its embattled chief executive, Dennis Muilenburg, as it attempts to pivot from a protracted crisis surrounding the grounding of its top-selling 737 MAX after two deadly crashes.

More than 9 months after the MAX was grounded and a week after halting production of the aircraft, Boeing named board chairman David Calhoun as chief executive and president, saying the company needed to “restore confidence” and “repair relationships with regulators, customers, and all other stakeholders.”

A week ago, Boeing took the monumental step of temporarily shutting down MAX production because of the crisis, which has pushed the aircraft’s return to the skies into 2020 and raised the anxiety level among Boeing’s workforce and suppliers.

Though coming during the sleepy days ahead of the Christmas holiday, the move was not entirely unexpected after Boeing stripped Muilenburg of his chairman title in October, installing board member Calhoun in that post.

Still, while Boeing watchers had seen Muilenburg’s days as numbered, some expected him to stay on until the MAX was returned to service.

But the timing of that landmark event remains unclear and will depend on the Federal Aviation Administration (FAA), which has made it clear it is not in a hurry.

An FAA spokesman said the agency does not comment on personnel decisions.

“The FAA continues to follow a thorough process for returning the Boeing 737 MAX to passenger service,” the FAA spokesman said. “Our first priority is safety, and we have set no timeframe for when the work will be completed.”

Muilenburg repeatedly offered predictions on the 737 MAX return to service that proved overly optimistic. His prospects further dimmed last week when its Starliner unmanned spacecraft came up short in a NASA mission to reach the International Space Station.

“Boeing clearly needs to reset the table and put someone in who puts safety first,” Hall told Agence France-Presse.

Shares rallied on the announcement of the leadership shakeup, which came after calls in Congress for Muilenburg to go. The stock price jumped 2.9% to finish at $337.55.

But Scott Hamilton of Leeham News, an aviation website, noted that Calhoun had roundly praised Muilenburg’s performance as CEO in a November television interview.

The executive has been “part of the Board policy-making that led to the cost-cutting some say had deleterious impact on the development of the MAX,” Hamilton wrote.

“Calhoun has been on the board 10 years,” he said. “Is Calhoun, an insider, the right person to pull Boeing out of its dive?”

Senator Richard Blumenthal, a Democrat from Connecticut, called for a “complete management house cleaning” at Boeing and new leadership “who will take safety seriously.”

Calhoun previously served as vice chairman of General Electric, where he had a long career after starting with the company soon after graduating from Virginia Tech. He also currently serves as senior managing director of investment banking firm Blackstone Group.

Following the announcement, Calhoun reached out to lawmakers, airline CEOs, suppliers, regulators, and other key stakeholders, a Boeing spokesman said.

Muilenburg will leave the company immediately but Calhoun will not take the CEO post until January 13, 2020, while he exits existing commitments, Boeing said in a news release.

During that period, chief financial officer Greg Smith will serve as interim CEO. Meanwhile, board member Lawrence W. Kellner will become non-executive chairman of the board effective immediately.

Muilenburg’s response to the crisis was increasingly criticized as the MAX grounding has dragged on far longer than initially expected as more disturbing details have dribbled out about the certification of the aircraft and issues with the flight software implicated in both crashes.

He also was seen as tone deaf and awkward towards families of the 346 people killed in the crashes.

Michael Stumo, whose daughter Samya was killed in the Ethiopian Airlines crash in March, called Muilenburg’s departure  “a good first step toward restoring Boeing to a company that focuses on safety and innovation.”

“The next step is for several Board members who are underperforming or underqualified to resign,” Stumo said.

The company resisted grounding the planes even after the second crash when Muilenburg pressed his case in phone calls with United States President Donald Trump.

Probes of the two crashes have focused in particular on the Maneuvering Characteristics Augmentation System (MCAS), an automated flight control system.

FAA chief Steve Dickson ripped Muilenburg in October for not disclosing communications from a Boeing pilot that raised questions about the MCAS.

The FAA also called out the company for its overly optimistic statements about restoring the MAX, saying it created the perception Boeing was trying “to force FAA into taking quicker action.” – Rappler.com