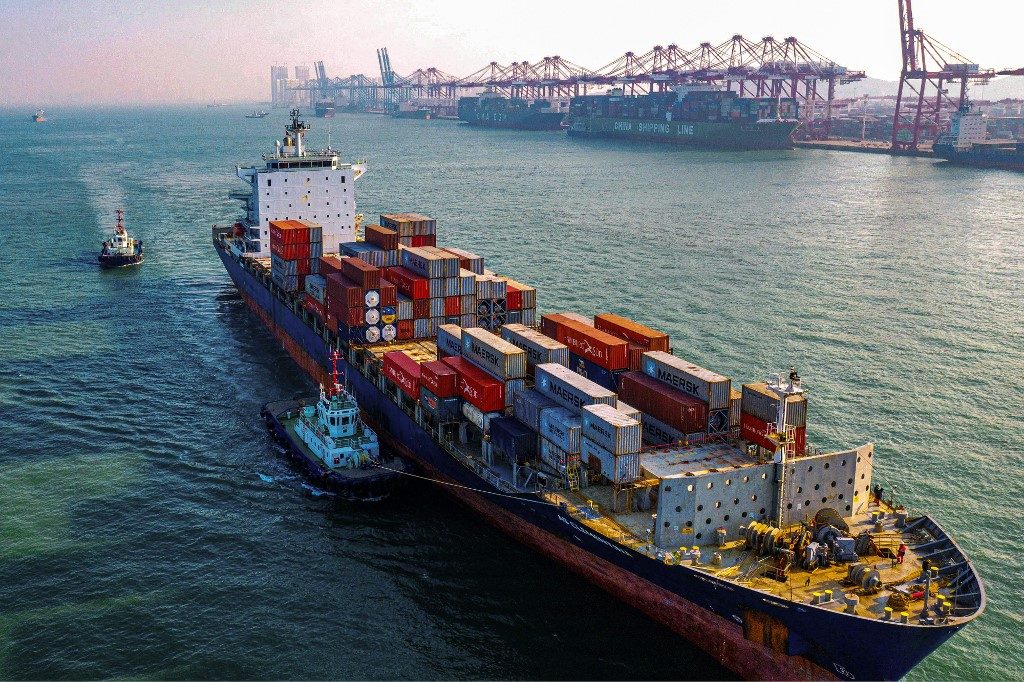 LONDON, United Kingdom – Sea freight transport, the lifeblood of trade and a bellwether of the global economy, has been blown off course by the new coronavirus, sparking general alarm.

As analysts pore over charts to gauge just how badly Chinese mega-factories have been hit, figures provided by cargo ship traffic paint a gloomy picture.

The Baltic Dry Index (BDI) reflects the daily price of moving goods such as coal, rice, and wheat along routes deemed representative of the global market.

Some call it the canary in the coal mine for the economic world.

The BDI has now reached lows last seen in early 2016, when the shipping sector was suffering a supply and demand imbalance in the wake of the 2008-2009 global economic crisis.

Its “capesize” index for the largest category of ships – ones that cannot even squeeze through the Suez or Panama Canals – is at historic lows.

“The latest slump is directly related to the coronavirus epidemic in China and the subsequent restrictions on activity,” London’s Capital Economics consultancy said in a research note.

“Given that China accounts for about 40% of global seaborne trade, it is not so surprising that freight rates have tanked.”

Louis Dreyfus Armateurs, a global merchant based in France, is one of many shipping giants approaching China with caution.

The 169-year-old company has banned its sailors from going on shore and stopped relieving its crews at Chinese ports, resulting in considerable disruptions.

“The coronavirus epidemic is a very serious event for the market,” Antoine Person, a top executive at the firm, told Agence France-Presse.

China does not just produce goods but is also a major consumer with a booming middle class and the world’s largest population.

It accounts for “about 35% of all seaborne dry bulk imports in the world,” Ostereng of Arctic Securities said. (READ: China’s stuttering economy braces for impact of deadly virus)

With the number of reported deaths from COVID-19 now above 2,400 and swathes of the country under effective lockdown for a second month, Chinese demand might suffer for months to come, Ostereng said.

This would impact exports to China from around the world, including the United States and Europe, with accompanying political repercussions.

That in turn reduces Chinese imports of coal and steel produced in places such as Australia and Brazil, impacting their economies.

The price of shipping both commodities is reflected in the BDI index, which is in “free fall,” Capital Economics said.

In addition to importing raw materials – Chinese factories consume nearly 40% of metals produced in the world – the factory slowdown has forced the world’s largest shipper to brace for the year ahead.

Denmark’s AP Moller-Maersk said Thursday, February 20, that the outbreak has “significantly lowered visibility on what to expect in 2020.”

“We expect a weak start to the year,” it warned.

Ambrose Evans-Pritchard, the international business editor of The Daily Telegraph, wrote on Thursday that the shipping collapse was “threatening weeks of chaos for manufacturing supply lines and the broader structure of global trade.”

He conceded that optimists expect Chinese demand and factory output to explode once the restrictions end and businesses try to make up for lost ground.

But no one can be sure when that will be – or if the world has avoided another viral wave that reaches pandemic proportions.

Some shipowners, intermediaries, and other market actors said factors such as which way the unpredictable Sino-US trade war goes would weigh as well.

Person, the Louis Dreyfus Armateurs executive, said that “new shipping standards and weather events are also behind the fall in the BDI.”

The weather, for one, will certainly improve, and the extended Lunar New Year festivities in China have ended, raising some hopes.

But Chinese factories are still experiencing severe worker shortages and Evans-Pritchard is unconvinced.

“Fiscal stimulus is coming but the transmission channels will remain blocked as long as the lockdown measures stay in place,” he wrote.

“But to lift the curfew risks losing control of the virus.” – Rappler.com