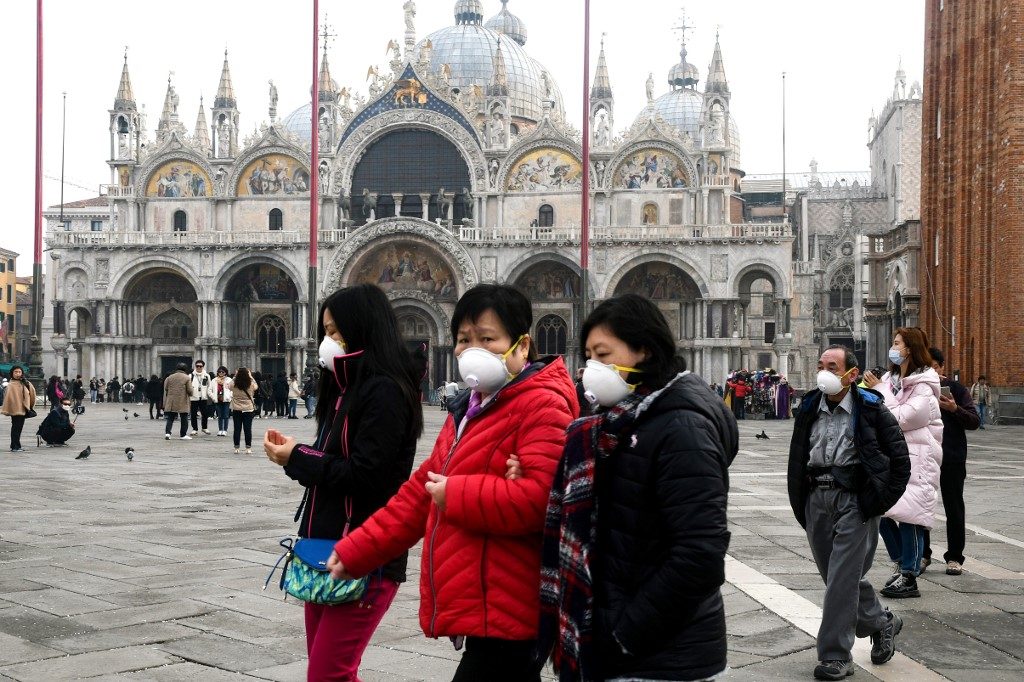 MILAN, Italy – As Italian authorities battle to contain the new coronavirus, measures to stem the spread of infections in the industrial north are impairing the eurozone’s 3rd largest economy.

The Italian economy was already sluggish before drastic isolation measures took effect, and it must now contend with plunging stock prices in Milan, canceled trade shows, and threats to tourism.

The weekend saw a surge in new cases, with 219 identified by Monday, February 24.

Authorities have reacted in the two worst-affected regions, Veneto and Lombardy, by closing schools and museums and scrapping sporting and cultural events.

The epidemic and measures to contain it “are having a very big impact on the service sector,” says Luca Paolozzi of the REF research institute, giving the example of restaurants and bars in the Lombardy region being shut from 6 pm to 6 am, when they do the most business.

“Since the service sector was allowing the Italian economy to keep its head above water, it is quite probable that we will see GDP (gross domestic product) shrink in the 1st quarter of 2020, but also the 2nd,” he said.

Hobbled by a slowdown in the global economy and internal political instability, in 2019 Italy registered the European Union’s lowest growth rate at a mere 0.2%.

The government had been forecasting growth of 0.6% in 2020 but that could now be in danger.

“Veneto and Lombardy alone represent between 25% and 30% of Italian GDP and are a motor of productive activity,” says Paolozzi.

The Milan stock market suffered heavy losses on Monday and was down by almost 6% in afternoon trades.

Luxury brands like Salvatore Ferragamo (down 9.3%) and industrial groups such as CNH and Brembo were among those worst hit.

Milan Fashion Week, which ended on Sunday, February 23, saw a 50% drop in Asian buyers and safety measures led to two shows – including Giorgio Armani’s – taking place without an audience.

Several big trade fairs have been canceled or postponed, including the Mido eyewear show.

Fears are now growing that the same fate could befall the Milan Furniture Fair, scheduled for April 21 to 26.

The event industry association Federcongressi&eventi has “raised the alarm,” saying that businesses in the sector in the Lombardy, Veneto, and Emilia-Romagna regions stand to lose more than 1.5 billion euros (1.6 billion dollars) in the space of a month.

The hospitality industry is concerned as well.

“The situation is worrying. Apart from the cancelling of events, businesses are starting to cancel bookings and delay trips,” Maurizio Naro, the Milan head of the Federalberghi trade body, told Agence France-Presse.

“For this week, there is an initial estimate of a cancellation rate of 25%,” he said.

Milan has seen a rise in tourist numbers since it hosted Expo 2015 5 years ago, with visitors drawn by its Duomo basilica, vibrant nightlife, and fashion and design events.

But with bars and restaurants shut from 6 pm and museums and cathedrals closed, tourists have much less to do.

Belgian Sophia Lomonaco was philosophical after arriving at Milan airport.

“We’ll make do, we will see what we’re able to do anyway, that’s life,” she said.

She was on a 4-day break with daughter Maeva to celebrate her 18th birthday.

“What’s most annoying is the museums, we’d reserved for the Duomo,” Lomonaco said.

They were mulling a trip to the nearby Borromean Islands instead. – Rappler.com