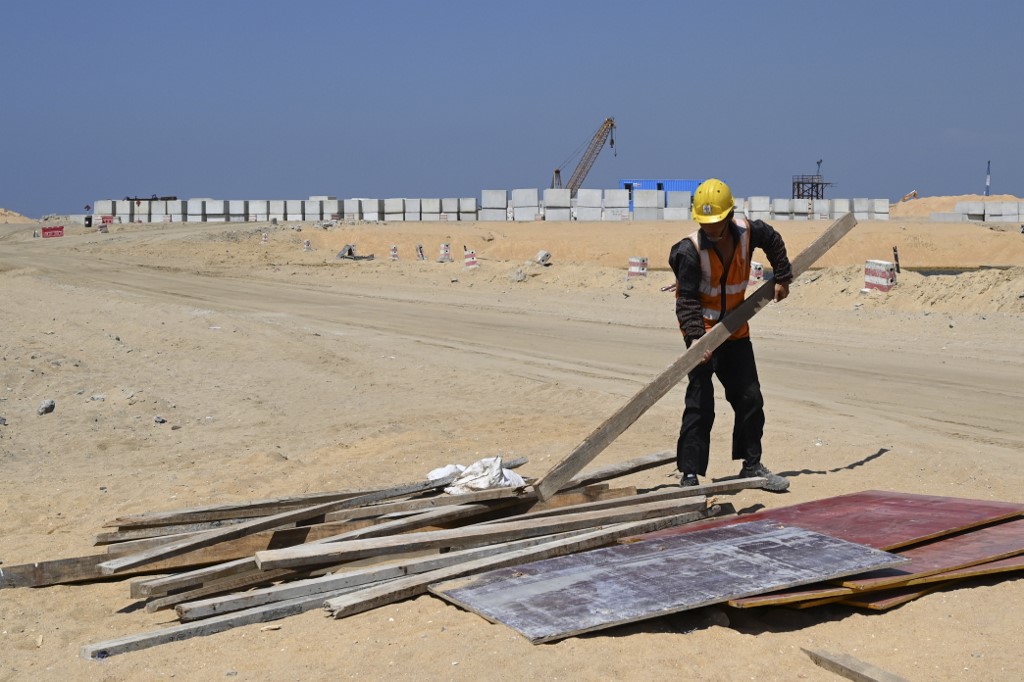 COLOMBO, Sri Lanka – From an artificial island in Sri Lanka to a bridge in Bangladesh and hydropower projects in Nepal and Indonesia, China’s trillion-dollar Belt and Road plan is stuttering under the effects of the deadly coronavirus.

The outbreak that emerged in China in late December and spread to dozens of countries has cut off the Chinese labor supplies and equipment imports needed to keep major infrastructure projects running.

More than 133 countries have imposed entry restrictions on Chinese citizens or people who have visited China to prevent the spread of the disease, data from China’s National Immigration Agency showed.

China itself has imposed quarantines and travel curbs across the country to contain an epidemic that has killed more than 2,700 and infected around 79,000.

At Colombo’s Port City – an artificial island the size of central London that is to house one of South Asia’s biggest financial centers – work was progressing at a snail’s pace as nearly a third of the Chinese workers who left for the Lunar New Year holidays have not returned.

The March opening of South Asia’s tallest free-standing communications tower – built with Chinese state funding in the heart of Colombo – has also been delayed by two months.

“Major construction projects in Sri Lanka that are funded by China mostly employ Chinese construction workers and they have hit a snag,” Nissanka Wijeratne, secretary of the Sri Lanka Chamber of Construction Industries, told Agence France-Presse.

At the Port City project along Colombo’s main seaboard, the cafeteria for Chinese workers was half empty recently.

“Most of our Chinese colleagues want to return, but the local staff are afraid to work with them,” said a Chinese foreman who only offered his surname, Xia.

“Work is slow and it isn’t clear when things would return to normal.”

Temperatures of all workers at the site are taken several times a day and masks and hand sanitizers have been distributed.

Two top Chinese decision-makers at the Port City project who had to return to prevent work from coming to a standstill were quarantined at a 5-star hotel, said project manager Bimal Gonaduwage.

“At the beginning there was a lot of panic among local workers, but now things have subsided,” Gonaduwage said.

A small pharmacy near the Port city project was doing a brisk sale in an “ayurvedic-amulet” used to “ward off infections.”

The red strings with a ball of crushed wild turmeric coated in Asafetida powder tied to its center are mostly bought by workers at “China projects,” the pharmacist Anjana Paramesh said.

The regulator of Chinese state-owned companies last week said the outbreak had caused “difficulties” for some overseas investments.

Some Chinese state-owned enterprises were “isolating the personnel to be dispatched [overseas] for 14 days in China and then another 14 days upon their arrival in the host countries before they begin work,” said Peng Huagang, secretary general of the state-owned Assets Supervision and Administration Commission.

Some 3,000 Chinese workers are employed at the China-funded $2.5-billion 1,320-megawatt Bangladesh China Power Company at the southern port of Payra.

Nearly two-thirds of them had returned to China during the Lunar New Year in January, said project manager Abdul Moula.

“Our plan is to start full scale operation by next month. But if at least 300 Chinese workers don’t come back by this month…power production could be delayed,” he said.

On Indonesia’s Sumatra island, work at the China-backed Batang Toru hydropower plant has ground to a halt due to a lack of Chinese workers, after Indonesia halted all flights to and from mainland China.

Construction of the $6-billion Jakarta-Bandung high-speed rail project will also be delayed, according to Indonesia’s investment affairs minister Luhut Pandjaitan.

In Nepal – home to more than a dozen Chinese-backed hydropower projects – many Chinese workers who left on holiday have also not returned.

“In their absence, projects are being delayed or slowed down,” said Vishnu Bahadur Singh from the Nepal Hydropower Association.

“Many of them are in specialized work, and it is not easy to replace them locally.”

The setback from the coronavirus comes after a pushback against Belt and Road projects in several countries including Sri Lanka, Malaysia, and Indonesia, where contracts were renegotiated to cut costs or ensure better environmental compliance.

But Chinese Foreign Minister Wang Yi last week played down fears that prolonged disruption from the virus could slow work on China-backed investments in Asia, saying it “won’t have any negative impacts.” – Rappler.com