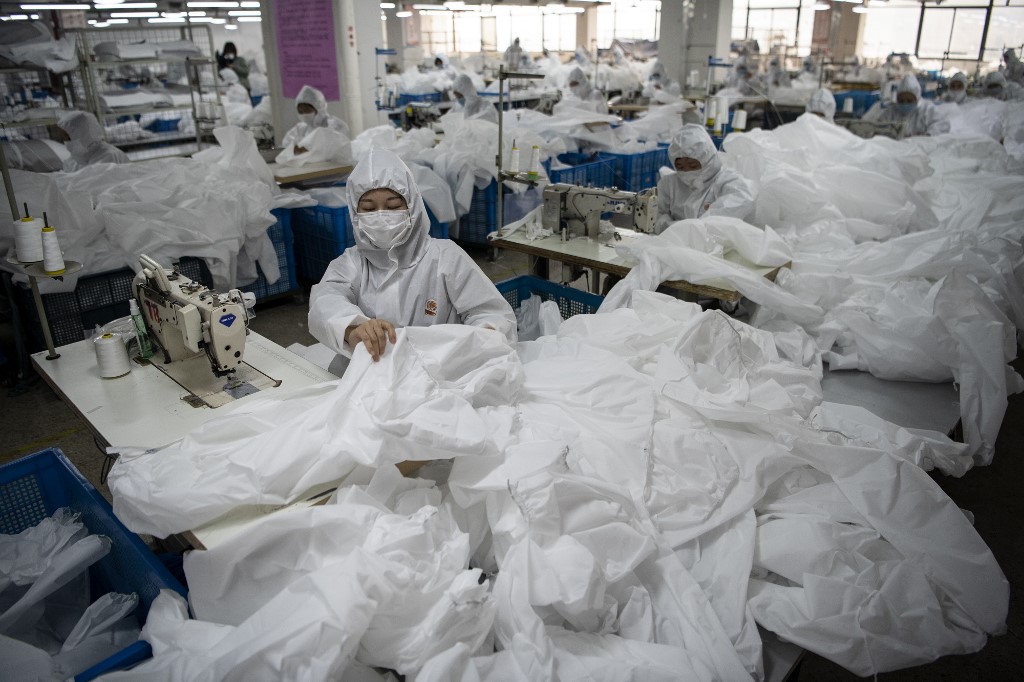 WENZHOU, China – The coronavirus outbreak in China is preventing clothing manufacturer Zhejiang Ugly Duck Industry Company from resuming its normal production of winter coats, so it has pivoted to another in-demand product: hazmat suits.

The company in the eastern China export hub of Wenzhou hastily repurposed its assembly line, putting the few dozen workers it could muster to produce thousands of single-use protective suits daily.

Ugly Duck – referring to the proverbial duckling that becomes a swan – is among countless Chinese manufacturers heeding calls to address desperate shortages of face masks, medical equipment, and other supplies to fight the new coronavirus.

The contagion has killed more than 2,800 people and infected some 79,000 in China, sparking global fears and a run on supplies.

Wenzhou is one the hardest-hit areas, with 504 cases and one death as of Friday, compared with 337 infections in far larger Shanghai.

Along with other cities in Zhejiang province, Wenzhou adopted harsh restrictions on residents’ movements on February 2. Ugly Duck was asked by local authorities to do its part.

“As soon as we received this mission, we reorganized our production line within 60 hours,” company president Pan Yue told Agence France-Presse.

The suits are sold to the government at cost and intended for local epidemic-control efforts.

But with the virus now hitting other countries, the company plans to continue hazmat suit production even after normal operations resume as expected in the coming weeks.

“We are considering export to Italy or wherever they are needed,” Pan said. “We want to contribute to society and to the world.”

But in one workshop nearly the size of a football pitch, the bright-white polypropylene material is first cut into basic shapes, then stitched together in stages, and finally folded and packaged on an assembly line by workers who are also clad in the head-to-toe suits to prevent contamination.

Each worker has a bottle of hand sanitizer at their work table.

Underlining China’s enduring ability to foster mass, collective efforts, companies across China – from iPhone maker Foxconn to car manufacturer BYD – have pitched in after news that doctors in frontline epidemic areas were treating patients without proper masks or suits, or were forced to reuse single-use equipment.

Wenzhou, with around 3 million people in its main urban core, is famed for its commercial prowess.

A trade entrepot for centuries, it was an early pioneer in China’s manufacturing-led economic transformation beginning in the 1970s and today produces a large portion of the world’s eyeglasses and shoes.

But the city remains subdued, its factories hobbled.

Much of Ugly Duck’s roughly 300-strong labor force are migrants from less-developed provinces like Yunnan and Guizhou in China’s southwest.

Only half of the workers have managed to navigate travel restrictions and reduced rail and bus traffic.

“The outbreak has impacted the company because [production] has been delayed for a month,” said Pan.

“But we will do everything to recoup the losses.” – Rappler.com