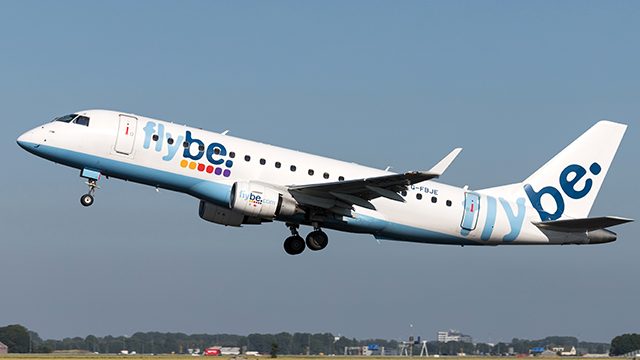 LONDON, United Kingdom (UPDATED) – British regional airline Flybe crashed into bankruptcy Thursday, March 5, after the deadly coronavirus proved to be the final nail in its coffin, leaving its planes and passengers stranded.

The biggest operator of United Kingdom domestic flights said in a statement that it has entered administration – a last-ditch process aimed at salvaging at least some of the company.

And with the carrier long blighted by fierce competition, volatile fuel costs, and a weak pound linked to the uncertainty over Brexit, Flybe’s announcement to ground all flights places some 2,000 jobs at risk.

The airline, based in Exeter in southwest England, has failed to turn around its fortunes since it was purchased just over a year ago by a consortium comprising Virgin Atlantic, investment firm Cyrus, and infrastructure specialist Stobart.

“Sadly, despite the efforts of all involved to turn the airline around, not least the people of Flybe, the impact of COVID-19 on Flybe’s trading means that the consortium can no longer commit to continued financial support,” Virgin said in a statement.

A slew of airlines – including British Airways and Ryanair – announced Monday, March 2, the cancellation of several hundred flights, in particular to Italy, as the novel coronavirus spreads globally.

But in the early hours of Thursday, the carrier appointed administrators after the government reportedly refused a rescue loan for £100 million ($128 million, 115 million euros).

Flybe’s network mostly links up small airports in the UK and Europe.

“You need the smaller airlines to help us go where we need to go – there’s not many other options,” stranded passenger Robyn Kent told Sky News at Exeter airport.

Conservative MP Kelly Tolhurst MP, representing the Department for Transport, told parliament that the government’s “immediate priority” was “to support passengers traveling home and employees who have lost their jobs.”

But she added, “Unfortunately in a competitive market, companies do fail and it is not the role of government to prop them up.”

Flybe, which carries about 8 million passengers annually, said all flights have been grounded and the UK business has ceased trading with immediate effect.

Flybe operates from 43 airports across Europe and 28 in Britain, and its collapse left potentially thousands of people stranded far from home.

The British government said it had asked bus and train operators to accept Flybe tickets and other airlines to offer reductions to help passengers reach their destination.

At the start of the year, Flybe agreed a payment plan with authorities to defer tax payments of less than £10 million.

Following the tax deferral, rival companies, including British Airways-parent IAG, complained to the European Union (EU) that it was receiving unfair state aid.

The government said its assistance did not breach EU rules and that help was based on the importance of the company’s domestic services.

Flybe’s demise follows a timely coronavirus warning from Dublin-based low-cost airline Ryanair at the start of this week.

The Irish carrier forecast that the fatal outbreak – which has killed 3,200 and infected 95,000 worldwide so far – would spark more European airline failures.

“We expect that this COVID-19 virus will result in further EU airline failures over the coming weeks,” Ryanair said Monday.

Recent high-profile casualties in Europe’s battered aviation sector include French carriers Aigle Azur and XL Airways, as well as Slovenia’s Adria Airways and Britain’s Thomas Cook, which was both a tour operator and an airline.

In contrast to Flybe, Thomas Cook collapsed without any government assistance in September, causing the loss of 22,000 jobs worldwide and stranding 600,000 holidaymakers abroad.

Separately on Thursday, the International Air Transport Association warned that the world’s airline sector could lose up to $113 billion in revenue this year due to the impact of the coronavirus. – Rappler.com