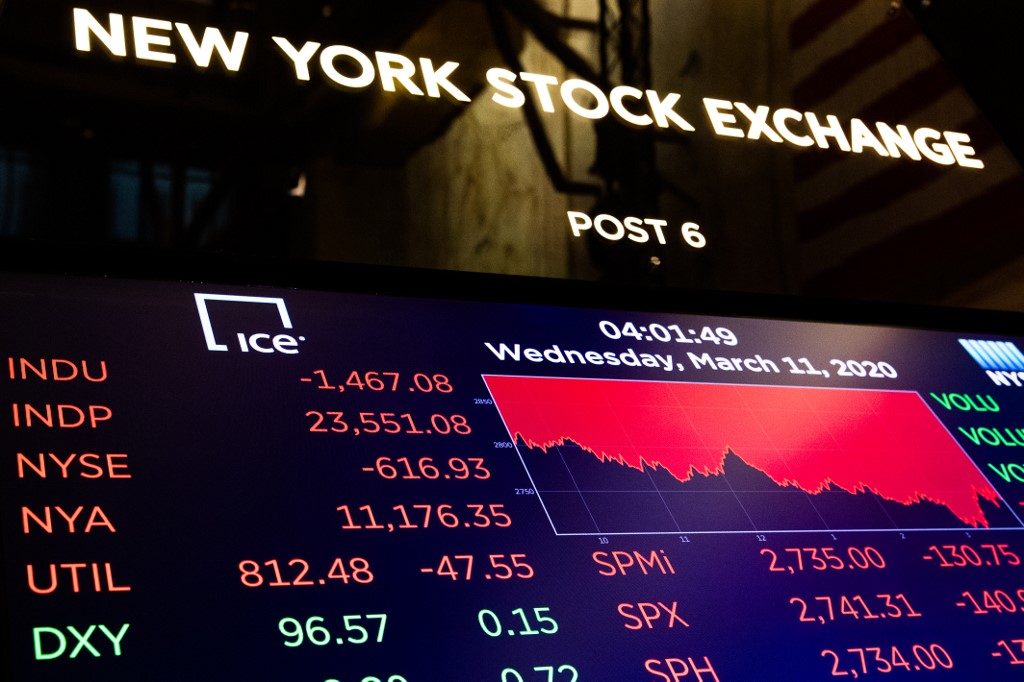 Facebook Twitter Copy URL
Copied
The Dow suffers yet another brutal daily drop that leaves the index more than 20% below its peak, making it a bear market

NEW YORK, USA – Wall Street stocks suffered another bruising rout Wednesday, March 11, with the Dow sinking into a bear market, as the economic toll from the coronavirus mounts with more major event cancelations.

The latest announcements included the cancelation of the Houston Rodeo and the World Figure Skating Championships, scheduled for Montreal, while the giant “March Madness” college basketball tournament will be closed to paying fans.

Hilton became the latest big company to withdraw its earnings forecast, while Boeing announced that it would suspend most hiring and overtime pay as a massive slowdown in travel further dims its outlook amid the 737 MAX crisis.

“All these announcements coming out are sending people running for the hills,” said Maris Ogg of Tower Bridge Advisors. “It’s still gonna take some time until the market gets past the panic.”

Earlier, leading stock markets in Asia and Europe also retreated, including in London, where the FTSE 100 dove 1.4% despite the Bank of England slashing its key interest rate to a record low and the government pledging fiscal stimulus worth £30 billion ($39 billion, 34.4 billion euros).

British Finance minister Rishi Sunak told parliament that COVID-19 “will have a significant impact on the UK economy – but it will be temporary.”

Sunak warned of likely short-term economic disruption, as up to a fifth of the UK’s working-age population could be off sick at any one time.

The move is the latest escalation of a fight among oil producers after Russia balked at a plan backed by the Organization of the Petroleum Exporting Countries (OPEC) to cut production in response to lost demand from the coronavirus.

“These increases, in addition to boosts already announced by Russia as well as other OPEC members, combined with expectations of flat to negative demand growth stemming from COVID-19, may keep crude prices suppressed for the long-haul,” said a note from Christin Redmond of Schneider Electric.

While United States stocks rallied on Tuesday, March 10, equities have been on a broad downward trend for the last 3 weeks or so as the coronavirus has morphed from a China-centered problem to a global worry, threatening the 11-year “bull” market for US stocks.

Wall Street stocks were in the red all day, but losses accelerated after the World Health Organization called the coronavirus outbreak a pandemic, issuing a grim warning that the global spread and severity of the illness was due to “alarming levels of inaction.”

There have been more than 124,000 confirmed cases of the virus, which has caused more than 4,500 fatalities and spread to more than 100 countries and territories.

US Treasury Secretary Steven Mnuchin told a congressional panel the administration was “working full time” on a package, although key lawmakers balked at a payroll tax relief plan floated by the administration. – Rappler.com