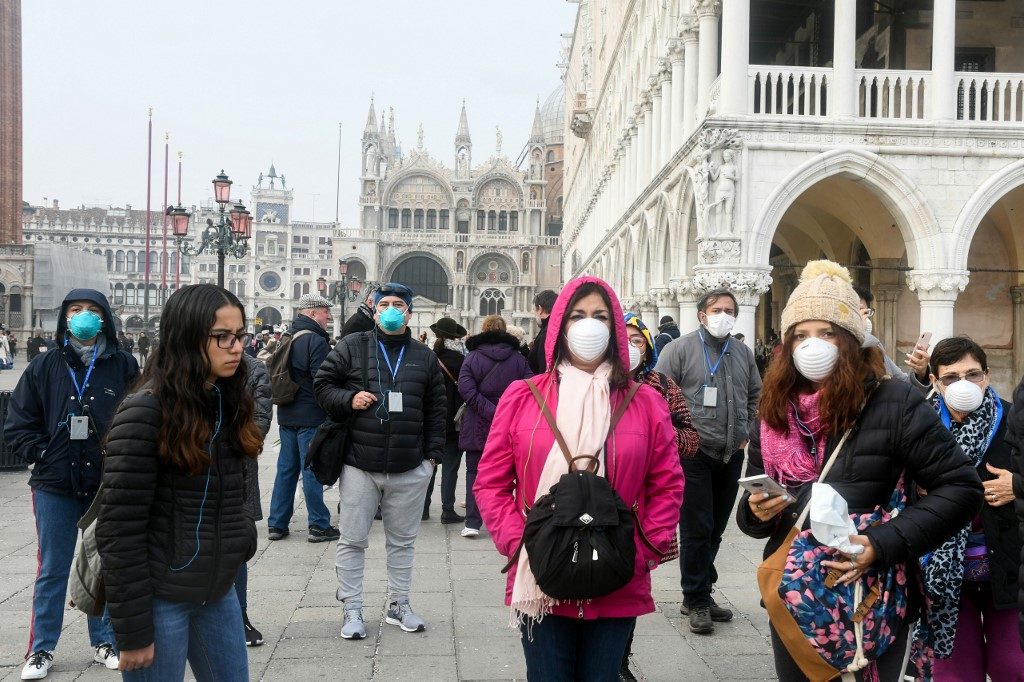 Facebook Twitter Copy URL
Copied
The European Central Bank launches a flurry of measures to cushion the impact of the coronavirus, including increased bond purchases and cheap loans to banks

FRANKFURT AM MAIN, Germany – European Central Bank (ECB) chief Christine Lagarde warned on Thursday, March 12, that the coronavirus was delivering a “major shock” to the global economy that required urgent, coordinated action from governments above all, as she unveiled fresh stimulus to keep credit flowing.

The latest major central bank to jump into the fray, the ECB launched a flurry of measures to cushion the impact of the virus, including increased bond purchases and cheap loans to banks.

But it surprised observers by leaving key interest rates unchanged, while Lagarde said the response should be “fiscal, first and foremost” rather than depending on central bankers.

The Paris and Frankfurt stock exchanges extended earlier losses after Lagarde’s announcements to post drops of more than 10% in the early afternoon.

The coronavirus’ spread represents “a major shock to the growth prospects of the global economy and the euro area,” Lagarde said.

“Even if ultimately temporary by nature, it will have a significant impact on economic activity.”

She urged governments to step up and do their bit alongside monetary policymakers as fears mount of a credit crunch that could destabilize banks and hurt small businesses.

“I’m particularly worried about…the complacency and slow motion process that would be demonstrated by the fiscal authorities of the euro area in particular,” Lagarde said.

A eurozone finance ministers’ gathering Monday, March 16, should bring “a decisive and determined move in the direction of this ambitious and collective fiscal response we have been calling for,” she urged.

As Lagarde spoke, the “spread” on Italian government bonds – the difference in yield they offer compared with benchmark eurozone issuer Germany – clambered more than 0.3 percentage points, as investors fretted over the costs of a nationwide virus-fighting shutdown.

The ECB is “not here to close spreads,” Lagarde told reporters in Frankfurt bluntly.

“The ball is more than ever in the governments’ court,” commented Nicolas Forest of asset manager Candriam.

As part of its stimulus package, the ECB’s governing council agreed a new series of cheap loans to banks, known as long-term refinancing operations (LTROs) and eased conditions on an existing “targeted” lending program.

Lenders that loan the cash they get from the central bank on to the real economy will now enjoy an interest rate potentially as low as -0.75%.

At 0.25 percentage points below the rate the ECB charges on banks’ deposits in Frankfurt, the difference represents an effective subsidy to the financial system.

“We are making available to all enterprises, with a focus on small- and medium-sized firms, massive refinancing means at very preferential rates and in significant amounts,” Lagarde said.

And the ECB will pile an extra 120 billion euros ($135 billion) of “quantitative easing” (QE) asset purchases this year on top of its present 20 billion per month.

The QE scheme will include “a strong contribution from the private sector,” the ECB said, as room to buy government debt while respecting self-imposed limits has grown tight.

But Lagarde added that governments will likely issue more debt to fuel any economic interventions, freeing the ECB’s hand to buy more bonds.

On top of the monetary measures, the ECB’s banking supervision arm said it would allow banks to run down some of the capital buffers they must build up in good times to weather crises, and enjoy more flexibility in the composition of their capital requirements.

Meanwhile the central bank dispensed with what many expected would have been a purely symbolic interest rate cut of just 0.1 or 0.2 percentage points.

The United States Federal Reserve last week and Bank of England on Tuesday, March 10, had space to cut interest rates by half a percentage point each to ease financial conditions.

Lagarde again reiterated the ECB’s long-standing call on governments to do more with their fiscal powers to buttress the eurozone economy.

In a conference call on Tuesday with European heads of government, the former International Monetary Fund head “drew comparisons with past crises” like the 2008 financial crisis, a European source told Agence France-Presse.

Such past trials were overcome by central banks and governments working in concert.

Turning to Italy’s woes, where the entire country is in lockdown, Lagarde said the ECB’s stimulus boost could cushion the blow.

“Italian banks, Italian households, enterprises will be fully beneficiaries and eligible to all of the tools” unveiled on Thursday, she said. – Rappler.com