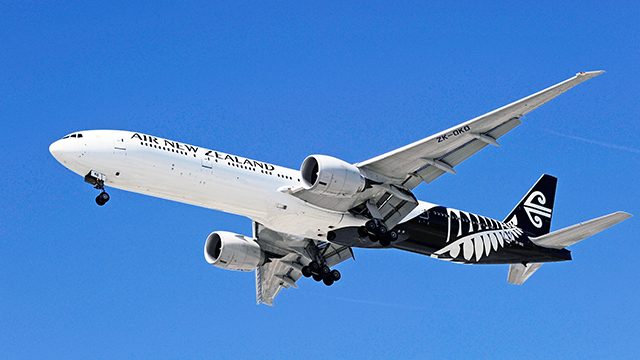 Facebook Twitter Copy URL
Copied
On its long-haul network, Air New Zealand will be reducing its capacity by 85%. It is still unclear how many jobs would be affected.

WELLINGTON, New Zealand – Air New Zealand announced Monday, March 16, it will cut the carrier’s long-haul capacity by 85% and impose redundancies as it shrinks to a skeleton operation in response to the coronavirus.

The airline placed its shares at a trading halt Monday as it assesses the fallout of plunging demand and global travel restriction sparked by the pandemic.

It said flights from Auckland to a range of destinations were being suspended, including Chicago, San Francisco, Buenos Aires, Vancouver, Tokyo, Honolulu, and Taipei.

“On its long-haul network, Air New Zealand will be reducing its capacity by 85% over the coming months and will operate a minimal schedule to allow Kiwis to return home and to keep trade corridors with Asia and North America open,” it said in a statement.

It said domestic services would be cut by about 30%, while flight to Australia and the Pacific island would also be reduced significantly.

Chief executive Greg Foran said there would be redundancies but did not reveal how many of the airline’s 8,000 staff would be affected, saying discussions with unions were underway.

“We are now accepting that for the coming months at least Air New Zealand will be a smaller airline requiring fewer resources, including people,” he said.

“We have deployed a range of measures, such as leave without pay and asking those with excess leave to take it, but these only go so far.”

Air New Zealand had already scrapped its full-year earnings guidance because of the virus’ impact and its woes deepened over the weekend when the New Zealand government ordered all international arrivals to self-isolate for 14 days.

Foran said the airline was better placed than most to navigate the unprecedented challenge posed by the outbreak.

“We are a nimble airline with a lean cost base, strong balance sheet, good cash reserves, an outstanding brand, and a team going above and beyond every day,” he said.

Foran also said the airline was in discussions with the government, although he did not reveal if the talks included taxpayers support to prop up the flag carrier during the crisis.

The government is scheduled to unveil an economic stimulus package on Tuesday, March 17.

New Zealand currently has 8 confirmed coronavirus cases and no fatalities, with the government saying its primary aim is to slow the infection’s spread. – Rappler.com