A decade after debt crisis, Greece on verge of virus recession 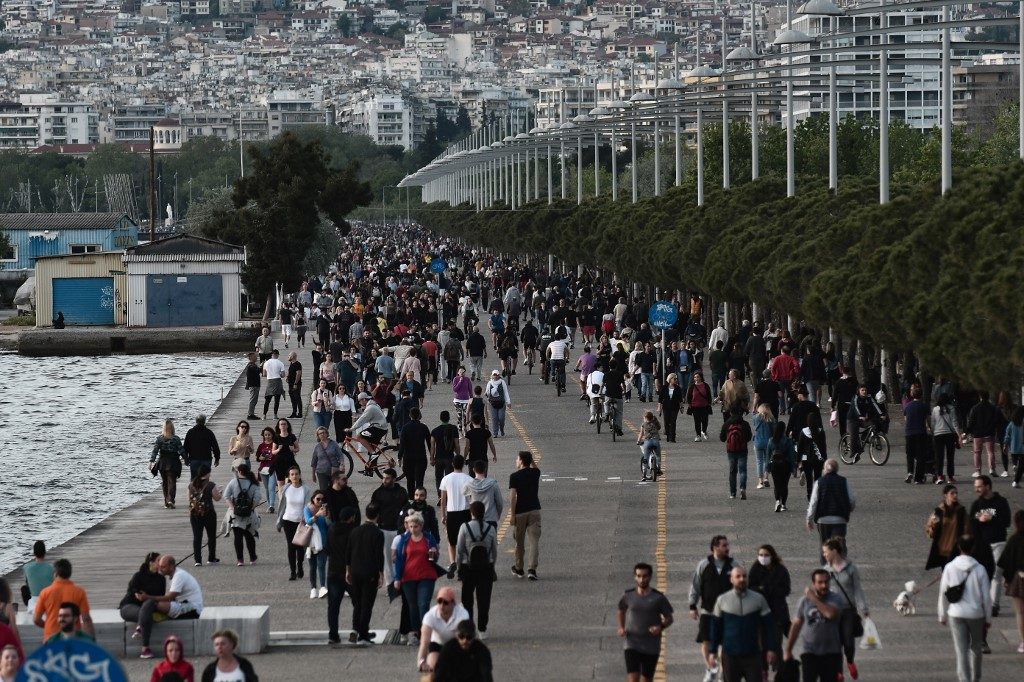 Facebook Twitter Copy URL
Copied
Though Greece has so far been spared the coronavirus death toll of other European nations, it will not escape the resulting economic downturn

ATHENS, Greece – Ten years after sinking into its worst economic crisis in living memory, Greece once again faces the specter of a grave recession in the midst of a global coronavirus lockdown.

Though the country has so far been spared the death toll of other European nations at fewer than 150 fatalities from COVID-19, it will not escape the resulting economic downturn, Prime Minister Kyriakos Mitsotakis warned this week.

“The consequences of this coronavirus attack will undoubtedly be dramatic,” he told parliament on Thursday, April 30.

“We know with certainty that [the recession] will be deep…. We don’t know how long the health crisis will last, we don’t yet know if we’ll have tourism.”

Tourism is one of Greece’s most important sources of revenue, along with shipping.

The Greek state alone could lose 8 billion to 10 billion euros ($8.8 billion to $11 billion) in income this year, the prime minister said.

Greece has already adopted measures worth 17.5 billion euros, or 10% of national output, to support businesses and employees, Mitsotakis said.

Including European Union (EU) funds, the package will reach 24 billion euros, he said.

But the opposition has questioned whether the money has actually reached the intended recipients.

“Where is this money? It’s good for announcements but actual businesses and [employees] have not received a single euro,” former leftist prime minister Alexis Tsipras said on Thursday, predicting that layoffs will soon be “out of control.”

Greece this year had been counting on a growth spurt of 2.4%. After exiting the final debt crisis bailout in 2018, its borrowing rates were at historic lows – in October Athens even sold treasury bills at a negative rate – and it has cash reserves of more than 36 billion euros at hand.

But with most of its economy in virus quarantine since March and global lockdowns expected to wreak havoc on tourism, Greece is expected to sink into a 10% recession this year, according to the International Monetary Fund (IMF).

Panagiotis Petrakis, professor of finance at the University of Athens, argued that the economic blow will be less severe.

“The most likely scenario is a 6% contraction, provided there is no deterioration in the pandemic,” he told Agence France-Presse.

Petrakis also believes that the economic impact of this crisis will be less protracted. The IMF itself estimates a 5.5% Greek recovery in 2021.

The Greek finance ministry said the downturn could be limited to 4.7% through support measures, followed by a 5.1% rebound. The jobless rate will approach 20%, it said on Friday, May 1.

The government will begin easing lockdown restrictions this month, with most shops opening by May 11 and restaurants and year-round hotels following on June 1.

But few expect any foreign visitors before July.

Many Greek businesses fear the damage will be irreparable, especially with minimum 2-meter (6.5-feet) social distancing requirements squeezing out customers.

“Many will not even reopen, they won’t manage with so few tables,” added a neighboring restaurant owner.

It was on May 2, 2010, when the socialist government of George Papandreou signed the first of 3 eventual bailouts with the European Commission, the European Central Bank, and the IMF that would total 350 billion euros.

A week earlier, Papandreou had stunned the nation by announcing the call for international assistance. His televised address from the tiny island of Kastelorizo is indelibly etched in the nation’s collective memory.

In the years that followed, a quarter of Greek national output would be wiped out in wave upon wave of wage and pension cuts and tax hikes demanded by the so-called troika of creditors.

Unemployment soared to a high of 27% before eventually falling to 16% in March, still the highest in the eurozone.

Dozens of general strikes and hundreds of street protests would follow, many of them violent. In one of the worst incidents on May 5, 2010, 3 people died in a bank set on fire during an anti-austerity protest, one of them a pregnant woman. The culprits were never caught.

The crisis was sparked by reckless state spending and misreporting of fiscal data to the EU. When revealed by Papandreou’s government, it caused Greece’s borrowing rates to spike beyond reach. – Rappler.com