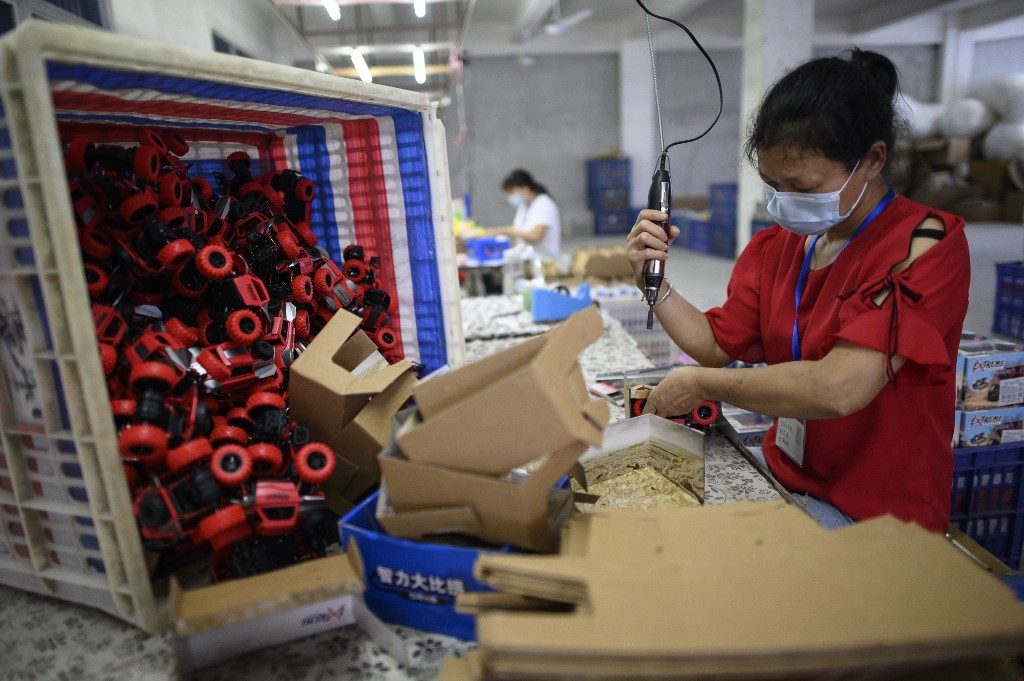 Facebook Twitter Copy URL
Copied
As the coronavirus hits trade across the globe, exporters in China are forced to look to domestic markets after years of selling overseas

BEIJING, China – Canceled shipments, returned goods, and a dearth of new orders have left China exporters in crisis as the coronavirus hits its trading partners worldwide – accelerating a long-standing push towards domestic consumption.

The world’s second largest economy is stirring back to life after virus cases dwindled from a peak in February, when activity came to a near-halt.

But recovery is now hampered by lockdowns and restrictions overseas as the coronavirus continues its deadly march across the planet, with exporters forced to look to domestic markets after years of selling overseas. (READ: Global trade will plunge by up to 32% in 2020 – WTO)

Chinese online marketplace Taobao said the number of foreign trading companies opening stores on its domestic-focused platform spiked 160% from February to May.

And policymakers – who have sought for years to wean the country off cheap exports and government spending in favor of domestic consumption – are welcoming the change.

“When there is no light in the west, there is light in the east,” the commerce minister, Zhong Shan, told reporters at a briefing this week.

He said domestic sales from export businesses rose 17% in April, and the government was supporting trading enterprises that specialized in foreign sales to tap the home market instead.

Foreign sales used to make up nearly half of toymaker Shantou Beilisi’s turnover, but this plummeted to just 5% after the virus struck.

“Many countries there imposed lockdowns and the global flow of logistics is another issue…. These have affected our order volume,” he said.

“There is also a rising number of unemployed overseas, and their purchasing power has fallen.”

Faced with few new orders and cancellations of existing ones, Chen said the company is attempting more domestic sales by changing the packaging of products and working with platforms such as JD.com to sell online.

Still, gearing towards the China market may not yield immediate results as weak domestic demand was a key factor behind the country’s poorest economic growth in around 30 years in 2019. (READ: No annual growth target for virus-hit China, a first in years)

The push inwards comes from China’s top echelons, with Industry and Information Technology Minister Miao Wei saying on Wednesday, May 20, that China aims to “rapidly activate domestic demand” to make up for the external shortfall.

Yang Shaohui of JD.com told AFP: “Before the epidemic, some exporters were already trying to expand their domestic market share as part of their business strategy to diversify, in order to protect themselves better against risks.”

Kim Ng, managing director of kitchen gadgets producer Ko Fung whose factories are in China, said he is producing 30% to 50% less than pre-virus levels, with almost no new orders between mid-March and April.

He expects orders from the US – a major export market – to fall further, and is preparing to take part in a trade fair in China to boost sales within the country.

What previously was just 5% of his sales could increase to half the business, he hopes.

Ng said he had already considered expanding domestic sales in China when the US imposed tariffs on Chinese goods at the start of their still-simmering trade war which began two years ago.

“The pandemic has accelerated our plans,” he said.

“It is a problem we have to solve eventually…. The US is now saying it might introduce more tariffs.”

Not all exporters in China can readily tap the domestic market, however.

Jason Lee, chief executive officer of metal parts manufacturer Shanghai EverSkill M&E, is at a loss as he simply doesn’t see equivalent demand for his products at home.

“Europe has started lifting [lockdown] restrictions recently, and we’ll only know if this is a good or bad thing in a few weeks,” he said.

Shipments to the US – which account for nearly half his production – have slowed, he said.

As a result he has cut production, canceled overtime, and has just two-thirds of his 300 or so staff at work.

“If shipment delays last a year, how will our factory continue operations?” he asked. – Rappler.com