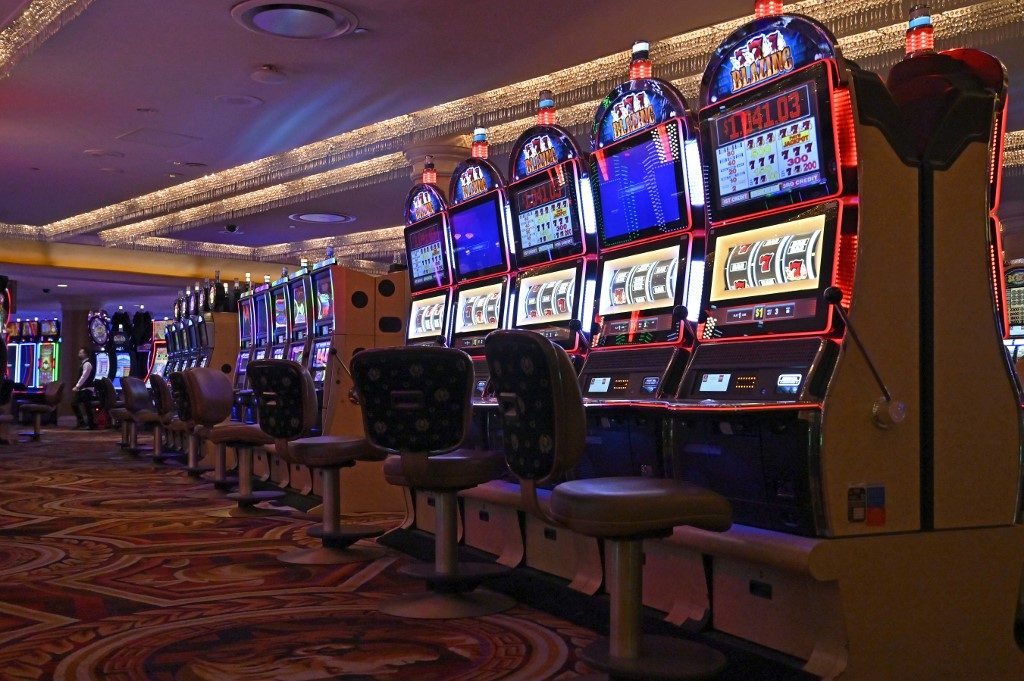 Facebook Twitter Copy URL
Copied
The reopening of casinos is a major boost for the badly-hit Las Vegas economy, which depends heavily on tourism

LAS VEGAS, USA – Las Vegas casinos threw open their doors on Thursday, June 4, after 11 weeks closed due to the coronavirus, with downtown roulette wheels and slot machines whirring to life minutes after midnight.

Large crowds flocked immediately to casinos such as The D, which had flown in gamblers from across the country on hundreds of free flights to boost the occasion.

On the world-famous Strip, which has been almost deserted since mid-March, casinos and resort hotels began reopening more slowly after dawn.

The Bellagio’s fountains were switched back on shortly before its sprawling casino floors reopened, as dozens of curious locals and excited tourists lined up to enter at 10 am.

The reopening is a major boost for the badly-hit Las Vegas economy, which depends heavily on tourism and has seen unemployment shoot as high as 33.5% in April.

Inside the city’s gaming rooms – capped at half capacity – strict restrictions were in place, with blackjack tables limited to 3 players in order to maintain physical distancing, and fitted with plexiglass barriers between players and dealers.

Staff were instructed to ensure crowds do not gather around players at craps tables, where a maximum 6 can stand at once.

“Over time, we’ll get fully back,” he added.

Guidelines for the company, which operates the Bellagio, MGM Grand, New York-New York, and other casinos, require every other slot machine to be switched off.

Guests are “strongly encouraged” to keep face coverings on while gambling, but drinks are once again being served on the casino floor.

At nearby Treasure Island, 29-year-old Alecia Perez had driven up from Los Angeles on Thursday morning with her partner and young child.

“We have a toddler so that’s another reason we came now, we figured it’d be a little more empty,” she told AFP.

“It’s a different type of vacation – we’re not looking to party.”

“It’s gonna be a little scary at first of course. I’m not going to make as much money as I usually do,” said Luis Rosales, preparing for his first shift back working as a server at the Venetian hotel.

“But it’s just going to take a little bit of time.”

He added: “I get to go to the bars now, to go gambling. That’s what we’ve all been missing.”

As well as recovering from the coronavirus, the city has been hit with tense protests over the death of George Floyd, an unarmed black man whose videotaped killing by police in Minnesota went viral and triggered demonstrations across the US.

A Las Vegas officer was in “grave condition” after being shot during protests earlier this week, and an armed Hispanic man was shot and killed by police after raising his gun in a separate, nearby incident.