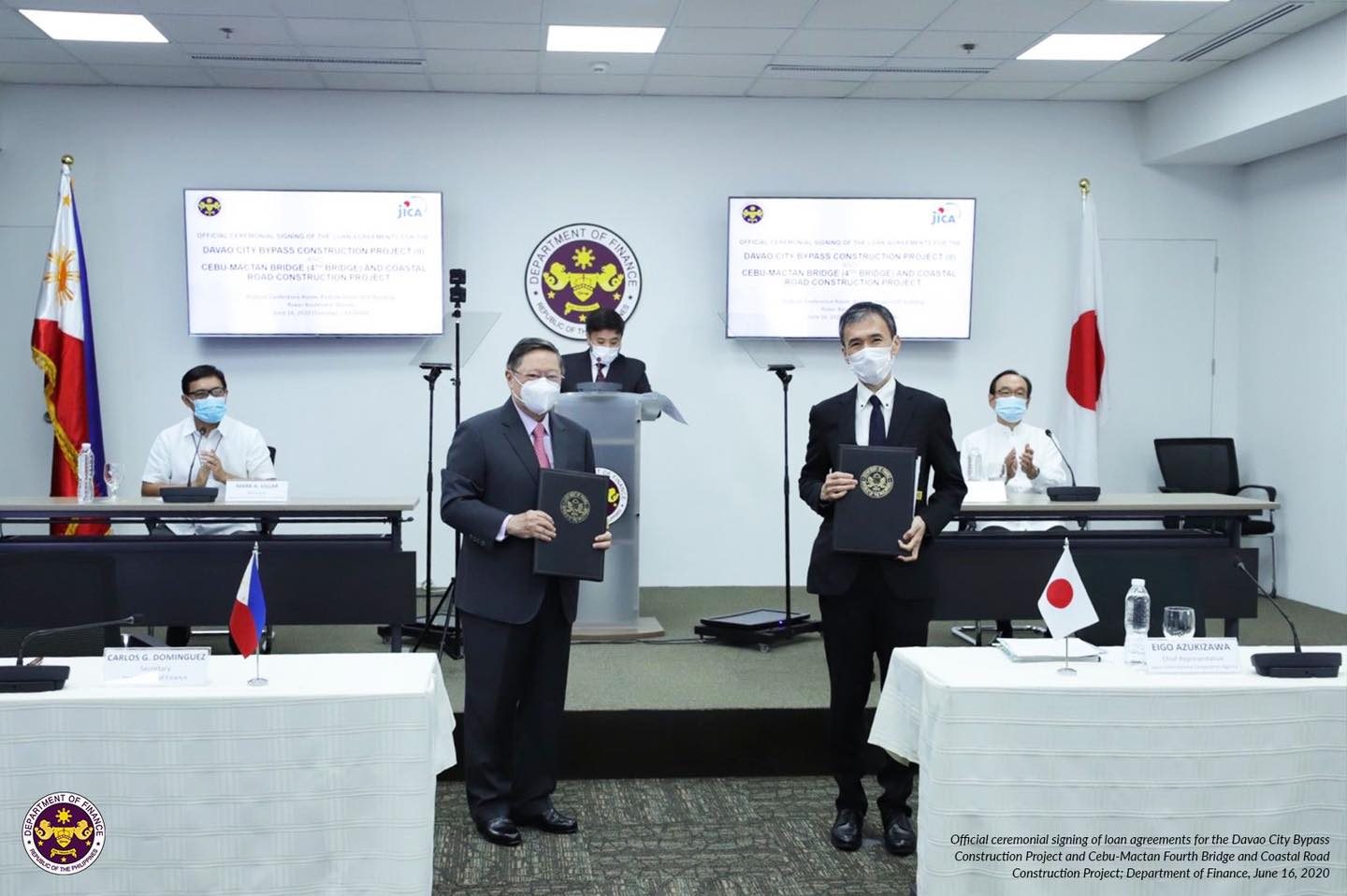 Facebook Twitter Copy URL
Copied
The Philippines and Japan sign a new loan deal worth P75.5 billion for the Davao City Bypass and the Cebu-Mactan 4th Bridge and Coastal Road

MANILA, Philippines – Two road projects in Davao City and Cebu got a total of P75.5 billion in funding through a loan agreement signed by the Philippines and Japan on Tuesday, June 16.

P57 billion is for construction of the Cebu-Mactan 4th Bridge and Coastal Road rehabilitation project, while P18.5 billion in additional funding is for the Davao City Bypass project.

The Davao City Bypass project was proposed and signed in 2015, during the administration of former president Benigno Aquino III. The additional funding signed on Tuesday will supplement the P9.27-billion loan signed in 2015, bringing the total financing from Japan to P27.77 billion.

The cost of the Davao project based on the revised list as of February 2020 is now at P46.80 billion. This amount has gone up thrice due to design revisions, from the initial cost of P16.81 billion approved by the Investment Coordination Committee in 2015 to P25.85 billion in 2018 and P37.169 billion in December 2019.

The 45.5-kilometer project will have a 4-lane bypass road, including a 2.3-kilometer tunnel. Part of the tunnel will be a 500-meter section running through the mountainous section of Barangay Magtuod, Davao City.

The bypass road will run from the Davao-Digos intersection in Toril, Davao City, to the Davao-Agusan National Highway in Panabo City. It is expected to reduce travel time from the current one hour and 44 minutes to only 49 minutes. (READ: Davao City gets more foreign funding under Duterte)

The Department of Finance said construction of the bypass road will start in 2020 and it is expected to be operational in 2023 – a year after the original target of 2022.

Meanwhile, the Cebu road project includes construction of a 3.3-kilometer bridge with 4 lanes, connecting Cebu City to Mactan. The 4.9-kilometer coastal road project will have a 4.75-kilometer elevated road.

On top of the loan, JICA will also finance the detailed engineering design of the Cebu project, which is expected to start construction in 2021 and be completed by 2029.

Japanese Ambassador to the Philippines Koji Haneda and Public Works Secretary Mark Villar were also present at the Tuesday signing.

The Davao City Bypass and the Cebu-Mactan 4th Bridge and Coastal Road projects are part of the government’s flagship projects approved in December 2019. – Rappler.com