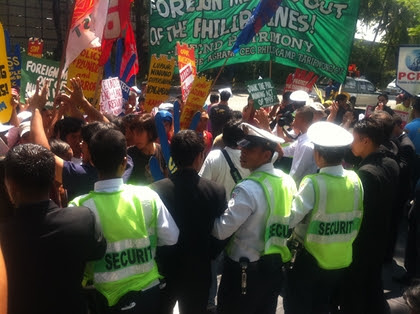 President Aquino’s recent trip to China has resulted in four memorandums of understanding, according to businessman Benjamin Philip Romualdez who joined the visit. More are pouring in, potentially doubling the initial target of US$1.4 billion in mining investments for 2011, said Acting Director of Mines and Geosciences Bureau (MGB) Leo Jasareno.

These optimistic pronouncements were made at the three-day Mining Philippines 2011 Exhibition that started on September 13. Key stakeholders in the mining industry gathered inside Sofitel Philippine Plaza, while more than 60 protesters amassed on the street outside.

Within the air-conditioned hotel, Romualdez, the President of the Chamber of Mines of the Philippines, heralded what he said could be over US$13 billion of new mining investments over the next 4.5 years if only the government fully implements the 1995 Mining Act, which allows for 100% foreign owned mining companies.

Yet he stressed, “The beginning or end of a mining project are the permits.” He appealed to the Department of Environment and Natural Resources to act faster in implementing mining laws and permits since he claims the department approved only one mining application this year.

But repealing the Mining Act was exactly what protesters from the Kalikasan People’s Network for the Environment wanted. Under the burning sun in Sofitel Plaza, they lit up an effigy of President Aquino riding a bulldozer, holding a “Philippine minerals for sale” sign.

Since the Supreme Court upheld the Mining Act in 2004, the value of metal mined in the Philippines nearly tripled from only P41.1 billion in 2003 to P111.1 billion in 2010, thanks in part to ballooning metal prices.

The Philippines holds a wealth of mineral resources and was ranked as the third largest producer of nickel ore in 2010. Yet the country’s rich reserves are seen as both a blessing and a curse.

The underbelly of the increasing investments is mining-related conflicts and some resistance from local governments who don’t want projects in their backyards. The Catholic Bishops Conference of the Philippines even became involved in the fray, issuing a pastoral statement in 2006 against the Mining Act for its potentially harmful environmental and social implications.

Lawrence B. Amwao, a 33-year-old Igorot, traveled with other indigenous peoples from Nueva Vizcaya and Cagayan, both home to large-scale mining operations, to join the protest. An Episcopal Deacon, he says he works with Catholic priests since one of their duties is to protect the integrity of God’s creation, which he believes includes life, land and resources.

“They (the mining companies) always promise hospitals, roads, other services, education but that is very minimal to the extent of the destruction they cause in communities,” says 25 year old Lea Fullon, an organizer for Kalipunan ng mga Katutubong Mamamayan ng Pilipinas (National Alliance of Indigenous Peoples in the Philippines).

Still pro-mining advocates see great potential for mining to unlock wealth that can drive economic growth and lift thousands out of poverty. As the Chairman of mining firm Benguet Corporation, Romualdez said, “I for one could be focused on so many other businesses but I am drawn to mining in the Philippines because I believe you are bringing economic development into the far-flung areas of the Philippines that most other businesses would never go to.”

What he tells critics is that he, too, is against irresponsible mining and there is in fact what he calls “peer-pressure” within the chamber since a misdeed by one company reflects poorly on all of them.

Solutions between local government units and large mining corporations remain to be found but the mining industry seems to be here to stay. – KATHERINE VISCONTI