ILAKAKA, Madagascar – At 7:00 am, it’s already getting hot in Ilakaka’s dusty market, where a woman empties a plastic vitamin bottle that is filled not with pills, but with dozens of tiny sapphires.

These stones once supplied half the global sapphire market, but political upheaval and a lack of investment have brought tough times to the world’s largest known reserve.

In 1998, a seam of high-quality sapphires was found in the Ilakaka river valley, about 700 kilometers (430 miles) south of the capital Antananarivo.

People from across the country rushed to search for the stones, inflating the population from a few dozen to about 50,000.

“People come here because it is easy to gain money, business is easy, not like in Tana,” said 24-year-old Celine, using the capital’s nickname.

“In Ilakaka, there are poor who get rich and rich who get poor,” said the mother of two children, aged 9 and 7.

The gems are mostly shipped to Sri Lanka and Thailand for cutting and polishing, a situation the government hoped to change in 2008 by banning exports of rough stones in the hope of creating local polishing centres with better jobs.

The timing couldn’t have been worse. The global financial crisis zapped demand and destroyed confidence in new investments in risky countries.

The export ban was lifted in 2010, but mining still has not fully picked up. The easiest to reach stones have long since been sold. Miners now must dig deeper to find sapphires, making the work more expensive and more dangerous.

“With the global meltdown a few years back, people stopped buying as they needed to spend money on necessities rather than luxuries,” said Brian Norton, a gems dealer in South Africa.

“Money was not getting back to mines and miners stopped mining or could not afford to mine, and started subsistence farming instead to provide for the family,” he said.

As markets recovered demand again picked up, he said, “but many miners had stopped,” making mining more scarce and sending prices soaring.

On the outskirts of Ilakaka, the fields are full of deep, unmarked, abandoned pits where miners once searched for sapphire.

Those who have returned to the mines take their rocks to the river, where men work in pairs to wash them in large rectangular sieves. Women use conical metal sieves to try to catch any sapphires that might have fallen in the water.

In one wide pit, about 30 miners carved stairs from the earth so they reach deeper into the gaping hole.

“When they work for themselves, people don’t always dig stairs, and the ground erodes on them,” said Muhamed Kone, a Guinean who shows the sapphire mines to tourists for of Colorline, a tourism organizer and gems showroom. 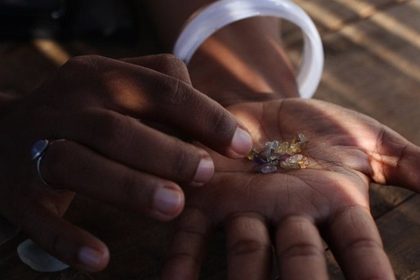 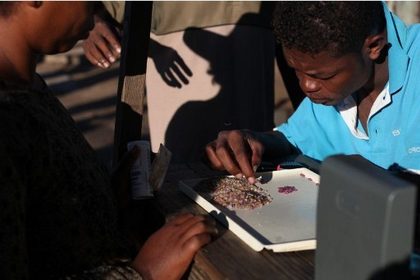 “It’s a lottery! Sometimes people work for days and don’t find anything, but they work for themselves,” said Kone.

Most people in Ilakaka live in wooden huts without running water or proper sanitation. The town has one paved road and very few concrete buildings, but many cars by Madagascar’s standards.

The vast Indian Ocean island is one of the poorest countries in the world, with 81.3% of the population living on less than $1.25 a day, according to the World Bank.

Celine left school 10 years ago and came to Ilakaka at the peak of the boom, travelling 230 kilometers from her hometown of Ambalavao in search of her parents, who had abandoned her in order to go search for sapphires.

She worked in the mine, washed sapphires, and became a maid. Eight months after arriving, she found her parents working in a mine, but making little money.

Now she works with a Sri Lankan who gives her rice that Celine prepares for the miners for free, so that they would share their winnings with her, and then sell the sapphire to her employers.

Showing off 10 sapphires her mother found the day before, she said she could earn a little less than one dollar each for them. Once the stone is cut and polished, even a tiny .25 carat sapphire could fetch many times that.

High-quality finished stones can sell for more than $1,000 a carat.

To make ends meet, she still has to work as a waitress, has started a show at the local radio station, and is studying to finally get her high school diploma.

“I used to work in the mine too, but it was hard and tiring,” she said. “And I wouldn’t find sapphires too often.” – Agence France-Presse