SEC may revise rules to get real estate trusts going

May 25, 2012 5:35 PM PHT
Rappler.com
Facebook Twitter Copy URL
Copied
The real estate investment trust or REIT law was introduced in the Philippines 3 years ago, but no company has put up a REIT yet due to stringent rules 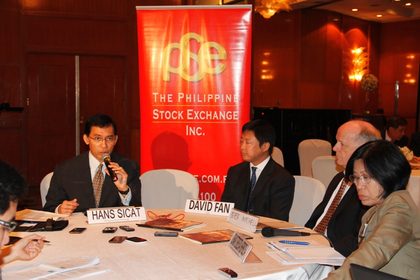 MANILA, Philippines – The Securities and Exchange Commission (SEC) is reviewing the stringent rules that have kept local companies from putting up real estate investment trusts (REITs).

“As long as the PSE (Philippine Stock Exchange) and other stakeholders and interested parties come out with a common stand, then we will do again our own study and review the existing regulation we have,” SEC chair Teresita Herbosa told reporters after a forum on REITs Friday, May 25.

The forum was organized by the PSE and attended by no less than the author of the REIT Law, Sen. Edgardo Angara, government regulators and representatives from the investment community.

Among the issues discussed were the contentious requirement set by SEC for companies to sell majority of REITs to public investors, and the tax to be imposed by the Bureau of Internal Revenue (BIR) on the initial transfer of real estate assets to the REITs.

“We are open to amending the public ownership [rule],” Herbosa said.

PSE President and CEO Hans Sicat said talks have been revived with the goal of crafting a REIT framework that will be acceptable to all the parties.

“Based on the feedback that we received during the forum, as well as the various queries from potential REIT investors, we gather that there is still overwhelming interest in investing in REITs in the Philippines,” he said.

“When we get REITs listing going, we estimate that the Philippines can generate at least $2.4 billion in new investments from the private sector, because of the additional capital that the REIT structure can provide. It is quite unfortunate however that all the potential issuers have decided to defer their REIT plans indefinitely.”

REITs are companies that own revenue-generating property assets such as hotels, office buildings and malls and whose shares will be listed and traded on the PSE. Public investors that will buy these shares will earn from them through dividends. Corporations that will launch the REITs will be entitled to certain tax incentives.

The law governing REITs was passed in 2009 but no property firm has put up one due to three stringent rules: the minimum public ownership, the VAT on the transfer of assets to REITs, and the escrow for tax incentives.

Under the revised SEC rules, the minimum public ownership required for a REIT to be entitled to the tax incentives is at least 40% in the first year from listing, and this will be increased to 67%, or majority control, by the end of the third year.

Property players such as SM, Ayala Land and Robinsons Land — which had expressed interest in doing REIT listing — found the 67% figure unappealing, saying it will result in a market overhang. They were worried the market may not be able to absorb their stakes once they are forced to sell them.

The BIR also imposed a requirement that REIT companies must set aside in escrow the tax incentives they will receive. These incentives will be forfeited in favor of government once the REIT companies fail to increase their public ownership to 67%. There have been concerns how this requirement can be aligned with a provision of the law to declare 90% of REITs’ yearly earnings as dividends.

The other issue pertains to the imposition of VAT on initial asset transfers to the REIT. In order to set up a REIT, a property player must form a REIT corporation to which it will transfer its assets. In previous years, such transfers were tax-free.

“While we understand the need of the national government to protect its revenue streams, we believe that over the long term, the benefits of the REIT to the whole economy will far outweigh its perceived negative short term effects on the government’s revenues,” he explained.

Herbosa said that while the SEC is open to revising the public ownership rule, the BIR and the Department of Finance are the only ones that can decide on the VAT and escrow. – Rappler.com