While sustainability efforts have been ingrained in the 67-year-old company, especially when it started publishing its Corporate Social Responsibility (CSR) efforts in 2003, it realigned its focus in 2010 to “H&M Conscious,” a business concept to make fashion go beyond short-lived trends.

The customers, in turn, are becoming conscious shoppers. They can go to any H&M participating store and hand their old clothes over at the cash desk. In return, they can receive a discount voucher for a particular item or get a percentage discount for any purchase of their choice. H&M then sells the donated clothes to a recycling company, which customers can re-sell to a second-hand or vintage market. Clothes beyond recycling are converted either as cleaning cloths or textile fibers.

Giving your old H&M piece a new lease of life is “closing the loop for textile fibers and keeping fashion from ending in landfill,” H&M managing director and CEO Karl-Johan Persson said.

The closed-loop recycling is the 5th commitment under “reduce, reuse, recycle,” among the 7 commitments under “H&M Conscious” that include providing fashion for conscious customers; choosing and rewarding responsible partners; being ethical; being climate smart; using natural resources responsibly; and strengthening communities.

The Filipino fans of the Stockholm, Sweden-based fast fashion company – and the curious, potential customers – will troop to the H&M Philippines flagship store’s opening on Friday, 9 am until midnight on October 17 at SM Megamall’s Mega Fashion Hall. H&M would become more endearing to them knowing that it is in the forefront of “making more sustainable fashion choices available, affordable, and attractive to as many people as possible,” the H&M Conscious Actions Highlights 2013 report said. 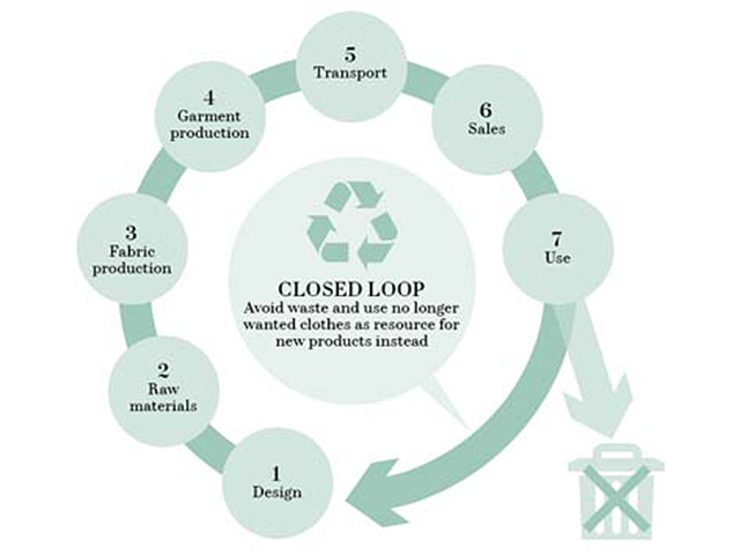 Persson cited two reasons why H&M invests in sustainability. “It’s the right thing to do [and] it’s good for the business in the long-term. We make our colleagues care more. It makes us an attractive employer to work for. We make our customers care more. We [are] proud of the work we do,” he said.

Persson shared that he came from a 2-day visit in Bangladesh, meeting with the commerce minister and the Bangladesh Garment Manufacturers and Exporters Association (BGMEA), discussing various sustainability issues, among them, fair wages for textile workers, the country’s Dhaka Tribune reported on October 15.

Thus, when the 9-storey Rana Plaza, which housed 5 separate garment factories, collapsed in April 2013 – considered as the worst industrial disaster in Bangladeshi history – H&M then expressed frustration with the government’s slow action in improving the working and living conditions of the country’s textiles workers. Even Muhammad Yunus, the Bangladeshi micro-loan pioneer who won the 2006 Nobel Peace Prize, urged manufacturers and Western retailers to ensure that garment workers are paid a fair living wage.

Following the tragedy, H&M then said it would sign an agreement drafted by global unions to improve safety in the Bangladeshi textile factories it uses. “Fair wage is a very complex issue. It’s a complex issue to explain to customers because sometimes, customers only compare prices …. The garments industry employs a lot of people. It’s good for the economy as a whole. You have to do it (enable a fair living wage) in a measured way so they don’t lose business to the neighboring countries,” Persson explained.

For this effort, H&M collaborates with various stakeholders – competitor brands, governments, the Fair Wage Network, the International Labor Organization, suppliers, the workers themselves, among others.

“It’s a collaborative approach. While we’re driving the efforts, we want them (stakeholders) to be onboard,” Persson said.

H&M’s sustainability efforts have been duly recognized, among them by the Dow Jones Sustainability Index; Global 100 List; “most sustainable fashion retailer in the Netherlands” by Rank a Brand; and one of the “World’s Most Ethical Companies,” to name a few.

“We’re still present in the country (Bangladesh) and we’re still growing. It’s costing us more but we’re willing to take it (enabling a fair living wage for textile workers). There’s a lot in our sustainability work that cost us money in the short-term, but it works for us in the long run,” Perrson said.

The H&M culture at work

While Persson is at the forefront of H&M’s sustainability efforts, he shared that as the managing director and CEO of his family’s 67-year-old company, he could be flying to the Philippines and opening a store; looking at new locations; or spending a day with buyers and designers, but not meddling with their functions as Persson admitted those are not his areas of expertise.

“I just want to make sure that we’re doing our best all the time. That we’re improving. That we’re giving customers more and more. I’m very curious about what’s going on, but I’m not micro managing,” Persson shared. While he did not have the opportunity to work closely with his grandfather, Erling (who founded H&M in 1947), or his father, Stefan, who serves as H&M’s chairman of the board of directors, Persson said both of them taught him teamwork; competitive spirit, “that we should always improve to give the customers more and more”; and being non-hierarchical.

“We’re also having fun [even when] we’re working hard. Hearing all those stories, those values from my late grandfather have helped me a lot. I speak to my father a lot also, he’s a very good sounding board. He gives good advice,” Persson shared.

Persson said he and his father get into disagreements at times, but not about big matters, “[However] the best idea wins. It’s part of the H&M culture as well,” he said.

Merging the H&M culture with those of the markets they operate is of outmost importance.

“We want to see the H&M culture anywhere in the world we are. The people we recruit should have our values. Of course, there’s always a mixture of cultures. That’s nice, as long as the H&M foundation is there. It also creates good business because there’s a combination of strengths from both cultures. There’d be more ideas on the table,” Persson said.

Expanding in the Philippines

With the fashion interest soaring, matched with a growing economy, the Philippines fits well with H&M’s business ideals of bringing quality fashion to a wide range of audiences, without them needing a “huge wallet” to afford it, Persson said.

H&M has been eyeing the Philippines for years, reportedly since 2009, being a “super-interesting market,” Persson said. (READ: H&M CEO on opening first PH store: What took them so long?) “Now we have decided to open, and it’s been good. It’s never easy getting into a new country (to do business with). But so far, so good,” Persson smiled.

According to its investor relations site, H&M stores are run by the company, “with the exception of some markets where we collaborate with franchising partners.” But even the most promising partner would not make H&M change its current expansion plan, that franchising is not part of H&M’s general expansion strategy, Perrson stressed.

“We prefer doing it on our own. Sure, we could expand quicker with a partner. We could also expand quicker if we decided on our own. But it’s all about doing things with quality, doing it the right way, and recruiting the right people fitting in our culture. We prefer to take it slower because we think it’s better for the company in the long run,” Persson said.

H&M’s expansion target is to increase the number of stores by 10% to 15% per year. Adding to its about 3,300 stores in other 54 markets are the Philippine flagship store, to be followed by (in no particular order): H&M in SM Makati, SM North EDSA, Robinsons Magnolia, and Robinsons Place Manila. Persson said they are already looking for other cities outside of Metro Manila for further expansion.

H&M’s arrival to the Philippines is highly anticipated, but not without concerns.

In July, retail industry leader Samie Lim said that sales of Filipino fashion brands have dropped by 50% in the first quarter of 2014 for failing to match the resources of foreign brands now occupying premium locations and huge spaces in the country’s major shopping meccas. Zara, Uniqlo, and Forever 21 are among those H&M’s notable competitors – brands that are already familiar to Filipinos.

Aware of this, Persson said that H&M is bringing something new here in terms of fashion, price, and above all, sustainability.

“But we also hope to attract more customers to the (same shopping) center and hopefully it would benefit not only us but also other brands as well. It will continue to be a mix of international and local brands and different price categories,” Persson said.

Persson added they are all excited and nervous for the Philippine flagship store opening on Friday.

“I’m nervous when opening a new store in a new market. The Philippines is a huge market. It’s not that I’m worried that it won’t be good because I believe it will, but that ‘special’ nervous feeling comes with all the work we put in opening (a store) in a new country,” Persson said. – Rappler.com

H&M CEO on opening first PH store: What took them so long?

7 things you must know about H&M in the Philippines

In Photos: H&M pieces that will be available in the Philippines