Easier to do business under Arroyo than Aquino?

Oct 20, 2011 8:00 AM PHT
Facebook Twitter Copy URL
Copied
It has become harder to do business in the Philippines during the first year of the Aquino administration according to a World Bank report released today. 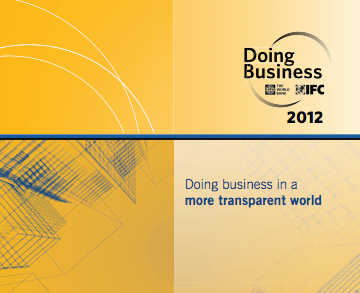 In both cases the Philippines sat in the bottom third of the 183 economies ranked by World Bank.

World Bank yearly rates economies on 10 areas of business regulation, such as starting a business, trading across borders and getting electricity.

How does the Philippines measure up?

•    One of the Philippines lowest rankings was in starting a business. It came in at 158th, in the bottom 15%, far below Pakistan, Iran and Nicaragua. Whereas it was 156th under Arroyo.

•    The country ranked in the bottom 50% for registering property, getting credit and enforcing contracts.

•    Although there was an absolute increase of .7% in the cost of all taxes a business bears, the Philippines slid against other countries who made more progress in tax payment.

•    The country did make some headway in dealing with construction permits, coming in with the top 65% this year after being on the cusp of the lowest 15% last year. Last year’s report published during the Arroyo regime, actually cites the Philippines as making construction permitting more cumbersome due to updated electricity connection costs.

So while the country is making headway in some areas, other countries seem to be climbing the ranks faster.

Worldwide, 13% more regulatory reforms were enacted. The Philippines was recognized for 1 reform while other countries made many more, such as Armenia which instituted 5. In the world race of global economies, President Aquino may have to speed ahead to make progress.