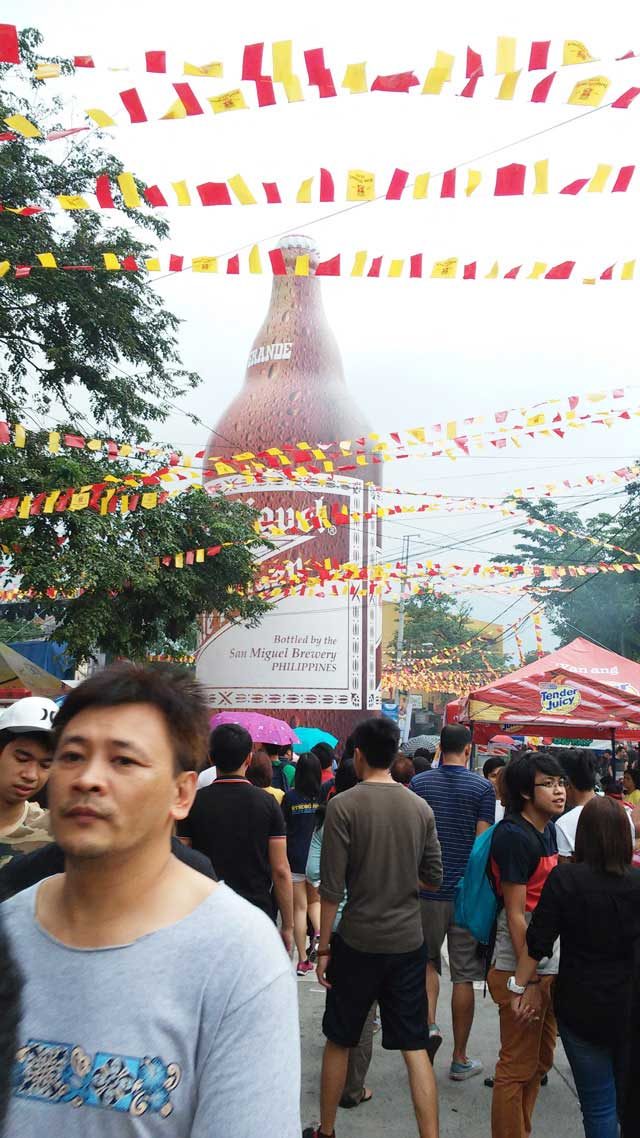 Facebook Twitter Copy URL
Copied
While most agree it is successful, business owners themselves are still reeling, and learning their lessons from dealing with the hungry throng during the October 2014 Maginhawa St. food fest

At night, neon signs hung in front of shops light up Maginhawa Street in Quezon City. Business crews, having clocked in at daytime, only get busier. Those working in food places are the busiest, with some closing counters at midnight.

Somewhere along the 2.2-kilometer strip, a family spends time in their living room while another dines out in the area. Residential houses coexist with holes-in-the-walls and restaurants in low-rise buildings, punctuated by corner bakeries, a 3-story telecom office, a factory outlet, spas and boutiques, and several private schools. The vibe is hard to miss. Maginhawa has always been sort of indie and without pretensions unlike other food crawl favorites such as Binondo, said engineer Homer Pagkalinawan, a regular customer since his undergraduate days in the University of the Philippines-Diliman.

The hub expanded from what looked like “a collection of college theses” back in the early 2000s. “It was like, ‘tara, project tayo, gawa tayo ng maliit na food stall (hey, let’s have this project of putting up a small food stall),‘” said chef Edward Bugia, BRGR: The Burger Project co-owner.

On ordinary days the appeal lies in its quiet community, which Tomas Morato Street and Timog Avenue lack, and its easygoing traffic, which one seldom encounters along Katipunan Avenue. But October 11, 2014 was no ordinary day. It was a Saturday, the celebration of Quezon City’s 75th year. The city government had enlisted Maginhawa and a few satellite streets to hold a food festival, the first of its kind in the neighborhood.

“I was part of the organizing committee for the whole food fest,” Bugia shared. “They really consulted with all the restaurant owners in Maginhawa. And Malingap Street was recognized as an extension of Maginhawa already, so we had to take that into consideration.”

According to Pagkalinawan, who checked out the fanfare, “they had just the right amount of radio announcement and their tarp was also simple. It was a normal publicity, but the crowd that came was exaggerated. There were too many people that it felt like Divisoria. I never stayed in a place. I walked the whole stretch.”

All entry points were closed to vehicles, from the major connectors to Philcoa and V Luna Extension to the roads going deep into UP Village, Teacher’s Village, Sikatuna Village, and Krus na Ligas.

The organizers offered tents to shop owners, granting them space extension outside. But most of the Maginhawa mainstays yielded to visiting sellers such as those operating online stores.

Customers who snagged stubs from team city hall preferred to claim their free food in the holes-in-the-walls and restaurants instead of buying from the tents. “We didn’t really expect a lot of people so our stock was good for only two weeks. Another thing, we’re located at the second floor. At 9 pm, some of our snow ice flavors were out of stock, so we had to offer other flavors to customers,” said Michelle Kho of the husband-and-wife tandem behind Snow Creme.

“We saw one angry customer who had been in line for 30-45 minutes. We approached that person and apologized,” she added.

Over-a-year-old Snow Creme, which popularized Taiwan shaved ice concoctions on the strip, can be found just above The Breakfast Table in the 189 building, the farthest the crowd could reach if they started on the Philcoa side.

Inversely, one had to walk back from the V Luna Extension end to experience the country’s oldest organic restaurant, Green Daisy Natural Kitchen.

“Our space is designed for relaxed dining. We’re not into fast turnovers,” said Daisy Langenegger, the agricultural ecology advocate who owns the place.

“The volume of the customers was scary. We saw a huge crowd. And then they were ready to eat anything you have inside,” Langenegger added. So her cooking apprentice and servers did what they could to receive everyone.

Green Daisy used to be a by-reservation-only space, opening its gate to the public months before the food fest. It continues to be a venue for introducing and hosting the works of independent artists in the metro. More established businesses such as The Burger Project did not have to deal with the shock of unexpected foot traffic. The burger joint, for example, handles 150-200 clients on a regular day and has the support in the form of additional supplies and manpower of its sister companies on Malingap – Pi Breakfast and Pies, Pino Resto Bar, which was originally on the Maginhawa site, and Pipino Vegetarian.

Surprised or not by the influx of people, everybody worked hard from morning until evening to accommodate customers. Everybody agreed that October 11, 2014 was good for business. “I think the general eating populace of Manila is very learned now. They know how to eat, so they understand that if you have a food fest outside with almost how many thousand people, they understand that sometimes service may be a bit slower, as long as the food is still up to par,” Bugia said.

With another branch in mind, Kho spoke of lessons learned from the event and now applied in Snow Creme’s daily operations. “After the food fest, we hired new baristas, changed our handheld menus with photos, and started to use number queuing and regularly check inventories.”

Langenegger said Green Daisy would be willing to add servers should there be a second food fest this year.

This time around, it would help to have “a more concerted effort for everyone to make it really a fiesta, because it still looked like individual restos doing their own thing. Maybe having an authentic Filipino fiesta atmosphere might help also,” Bugia added.

“Maginhawa is already known as a very good food street, but I think the food fest gave it more recognition for people, and it really gave a fiesta-like atmosphere, which wasn’t really existent here before. And that vibe really brought people here.” – Rappler.com