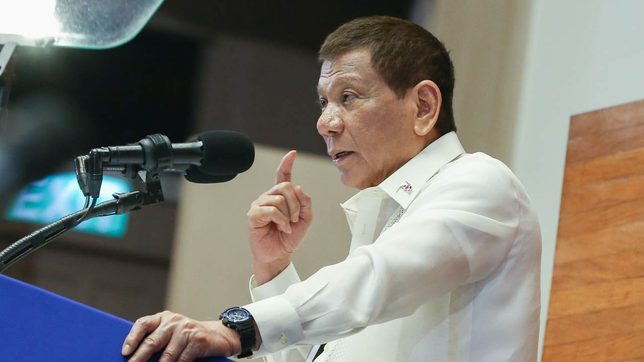 Facebook Twitter Copy URL
Copied
Businesses earlier hoped to hear a concrete plan for reviving the economy in President Rodrigo Duterte's 5th State of the Nation Address. Instead, they get a tongue-lashing.

President Rodrigo Duterte using his 5th State of the Nation Address (SONA) to threaten and insult big businesses has a chilling effect on potential investors, a business group warned on Monday, July 27.

Within the first 5 minutes of his speech, Duterte had slammed the Lopez family, owners of media giant ABS-CBN.

The House of Representatives recently rejected the network’s bid for franchise renewal, effectively paralyzing its operations and leaving thousands of workers either unemployed or at risk of losing their jobs amid the coronavirus pandemic.

“Media is a powerful tool in the hands of oligarchs like the Lopezes who use it in their battle with political figures. I am a casualty of the Lopezes during the 2016 elections,” said Duterte. (READ: In the crosshairs of history: The Lopez family)

Duterte’s statement contradicts his spokesperson’s earlier claim that the President is “completely neutral” on the ABS-CBN issue.

“I will be the one to articulate the anger of the Filipino people and you might not want what I intend to do with you. Kindly improve the services before December. I want to call Jesus Christ [in] Bethlehem. Better have that line cleared,” he said.

Francis Lim, president of the Management Association of the Philippines, said this triggers fears that Smart and Globe could suffer the same fate as ABS-CBN.

“He gave a stern warning to two of our big businesses to improve their services until December 2020, otherwise he would take over them with the help of Congress,” Lim said.

“Given what recently happened to ABS-CBN, this is a clear and present danger to the businesses mentioned. He can make it happen and that sends a chilling effect to business and potential investors.”

Without mentioning names, Duterte had gone on to call tycoons “oligarchs.”

The Zobels of Ayala Corporation are of Spanish descent. They own Manila Water and AC Energy.

“What is sad is that he characterized our present-day businessmen as the same type of oligarchs who took advantage of people during the Spanish regime. This is so sad given how Philippine business has helped the country through the years, which it ably demonstrated during the pandemic,” Lim said.

Prior to Duterte’s SONA, business groups urged the President to tackle the much-needed fiscal stimulus program, particularly the P1.3-trillion package under House Bill No. 6815 or the Accelerated Recovery and Investments Stimulus for the Economy of the Philippines (ARISE).

However, he only mentioned the proposed Corporate Recovery and Tax Incentives for Enterprises Act (CREATE) and Financial Institutions Strategic Transfer Act (FIST) in his speech.

“We are glad that he pleaded with Congress to pass laws to help business recover from the pandemic. He prominently mentioned the CREATE and FIST bills,” Lim said.

“Surprisingly, he did not endorse the ARISE bill which is a well-studied bill aimed at effectively addressing our economic problems on all fronts in the shortest possible time. As we earlier said, we cannot afford to be behind the curve in putting in place all stimulants that will help our economy recover quickly from the pandemic.” – Rappler.com