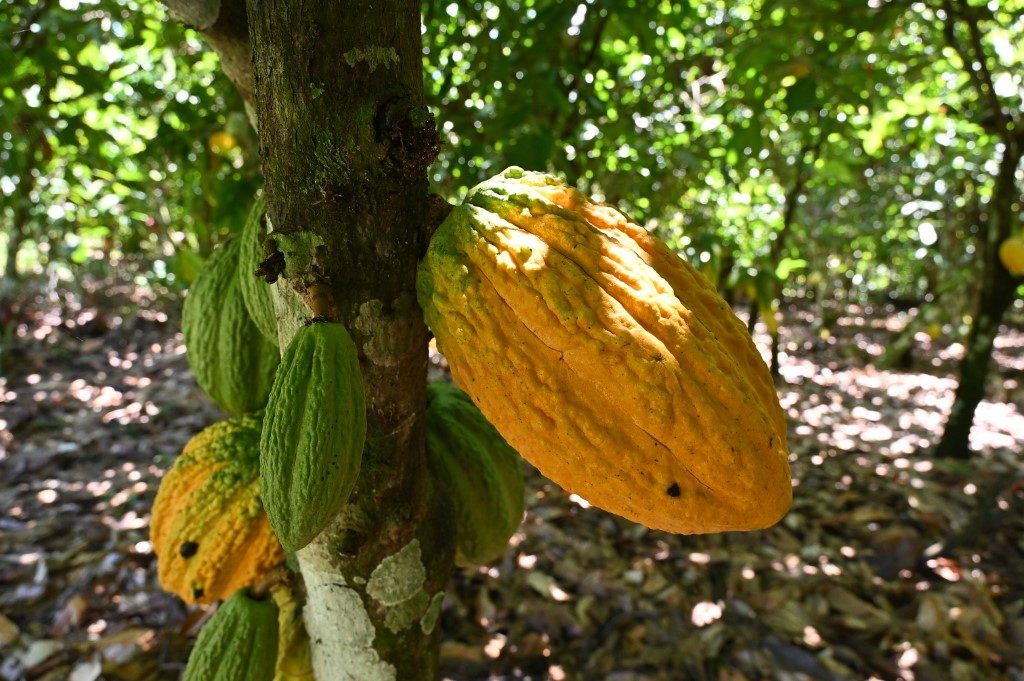 COCOA. Cocoa pods are seen on a tree in a plantation near Guiglo, Ivory Coast, on October 10, 2020.

Facebook Twitter Copy URL
Copied
Cocoa-producing countries are not celebrating, market observers warn, and instead point to tensions with buyers who resell the product to the chocolate industry

Tensions between cocoa-producing countries and manufacturers over costs have led to soaring prices on the international market, even as demand slumps because of the coronavirus.

In New York, the price of a ton of cocoa for delivery in December has jumped by more than 25% since November 13 to $2,915 – the highest since the outbreak began.

But cocoa-producing countries are not celebrating, market observers warn, and instead point to tensions with buyers who resell the product to the chocolate industry.

They joined forces last year to try to get more from the chocolate industry, in a model resembling that of the Organization of the Petroleum Exporting Countries cartel.

Abidjan and Accra obtained a premium of $400 per ton of cocoa from their buyers, known as the Decent Income Differential (DRD), and applied it to the 2020-2021 season.

But since then, the pandemic has ravaged global demand, and buyers are reluctant to see prices rise with a surplus in supply.

“From my understanding, there was a request made for a concession to lower the premium being paid. This was apparently turned down,” said commodities analyst Judith Ganes.

Instead, one confectionery giant turned to buying from “reserves” in trading centers such as New York rather than buying directly from cocoa-producing countries, she added.

The Bloomberg news agency quoted anonymous sources privy to the transaction as saying the buyer was US confectioner Hershey.

Hershey told Agence France-Presse in response: “We do not discuss details of our specific buying and hedging activities.

“We buy cocoa from a variety of suppliers and sources to meet our ongoing business needs.

The world’s number one confectioner, US giant Mars, also said it was “one of the first buyers of the 2020/2021 harvest, on which we paid the DRD.”

On the New York market, the contract for delivery in March, which was less directly affected, saw its price jump by nearly 16% to $2,740.