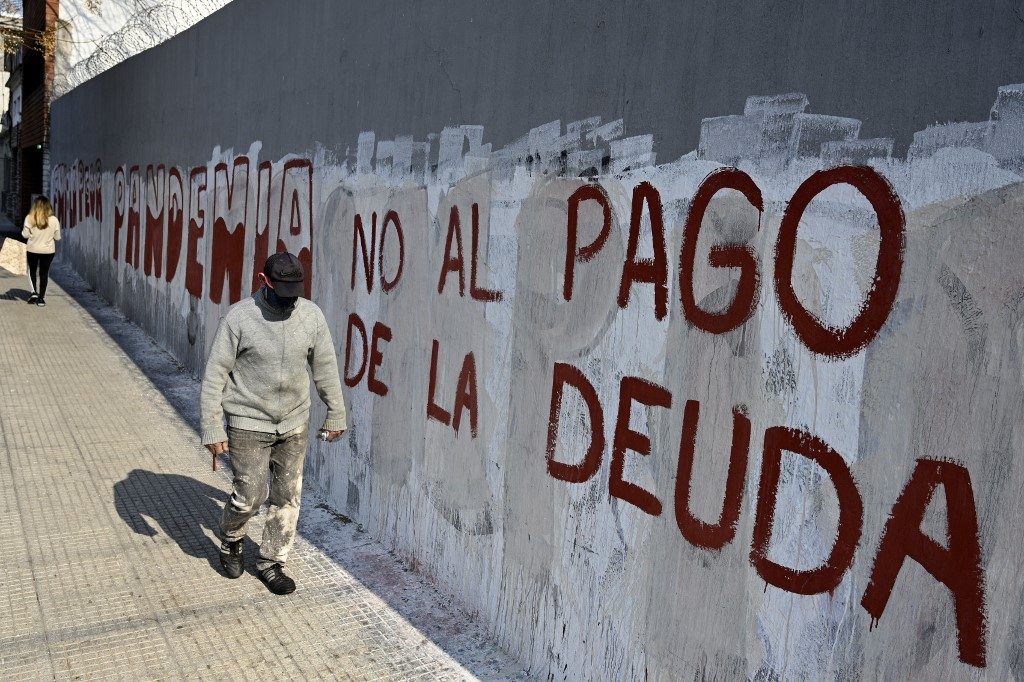 People pass by a wall reading "IMF the Worst Pandemic. No to the Debt Payment" in Buenos Aires, on August 3, 2020 amid the COVID-19 novel coronavirus pandemic. - August 4 marks deadline for concluding debt negotiations with bondholders. On late July, the Exchange Bondholders, Ad Hoc and Argentina Creditor Committee groups rejected the South American country's latest proposal and submitted a counteroffer of their own, which was subsequently dismissed by Argentina President Alberto Fernandez. (Photo by Juan MABROMATA / AFP)

Facebook Twitter Copy URL
Copied
Analysts are not convinced that Argentina is in the clear, even after it reached a deal with creditors

Argentina’s President Alberto Fernandez has reached a deal with creditors to restructure a $66-billion debt following months of wrangling, but analysts say that won’t be enough to solve the crisis-wracked country’s economic woes.

The government is now expected to focus on renegotiating the repayments of its $44-billion loan from the International Monetary Fund (IMF) as well as other multibillion-dollar debts.

Fernandez celebrated the “impossible” resolution on Tuesday, August 4, achieved despite the added financial pressure imposed by the coronavirus pandemic, saying the “horizon is clear” to reach further agreements.

But analysts are not convinced that Argentina is in the clear yet.

“It takes the pressure off, but it’s not enough,” said economist Mariana Dal Poggetto, director of consultants EcoGo.

The bonds related to Tuesday’s agreement, issued under foreign legislation, represent roughly a fifth of the country’s $324-billion debt, which amounts to around 90% of its gross domestic product (GDP).

As well as its IMF loan, Argentina must resolve the situation surrounding a $41.7-billion debt issued under national legislation whose payments have been deferred until December 2021.

The country has been in recession since 2018 and the IMF expects its GDP to shrink by almost 10% this year, due to effects of the pandemic.

Already more than a third of the country’s population of 44 million live in poverty, and annual inflation stands at 40%.

Argentina is due to repay the $44 billion to the IMF over the next 4 years, “which is untenable,” according to Capital Economics analyst Nikhil Sanghani.

The government “needs to clear things up with the International Monetary Fund and consolidate the fiscal front,” added Dal Poggetto.

But Argentina is increasing its fiscal deficit due to an ambitious plan of subsidies the center-left government has implemented to help the most vulnerable in society.

“It will be vital for the Argentine government to set credible and sustainable fiscal and monetary policies to support an eventual return to international capital markets” that it lost two years ago, said the vice president of Moody’s credit ratings agency Gabriel Torres.

IMF is the ‘real problem’

When Fernandez assumed office in December 2018, he suspended the remaining $13 billion of disbursements from the $57-billion bailout loan his predecessor Mauricio Macri had agreed with the IMF.

“The IMF payments begin in September of next year, one month before legislative elections,” said Dal Poggetto, adding that Fernandez will need to renegotiate “quickly.”

But the “real problem” is that the IMF “doesn’t accept discounts” so Argentina cannot come to an arrangement like the one with creditor groups, said economist Emanuel Alvarez Agis.

The IMF “will ask for a consistent economic plan, whereas so far [Argentina] hasn’t offered more than general terms,” said Matias Carugati from Management & Fit consultants.

However, Sanghani believes that “the IMF will provide additional funding to Argentina in a repackaged agreement which also extends the current debt repayment schedule” beyond the current 4 years.

In the short term, the deal “clears maturities, decompresses demand for the dollar, and allows for the release of huge fiscal resources to deal with the pandemic,” said the Argentine Center for Political Economy.

“The eventual access to international credit in the medium term could make company financing cheaper in the pandemic context where leverage is key.”

It’s a “big step” forward, according to Marcelo Fernandez, president of a group of business chambers.

“For the small- and medium-sized companies, it means we can bank on policies that benefit financing for production and consumption.”

According to Dal Pogetto, the public deficit could finish the year at 8% of GDP.

The deficit will grow “just like in the rest of the world. The difference is that Argentina, despite the deal, doesn’t have access to credit,” she added. – Rappler.com