Aquino: PH will be ‘first-world’ within generation if reforms continue

Jul 27, 2015 10:00 PM PHT
Chris Schnabel
Facebook Twitter Copy URL
Copied
'This is just the beginning, you haven’t seen anything yet,' President Aquino says as he details in his last State of the Nation Address the economic gains under his watch 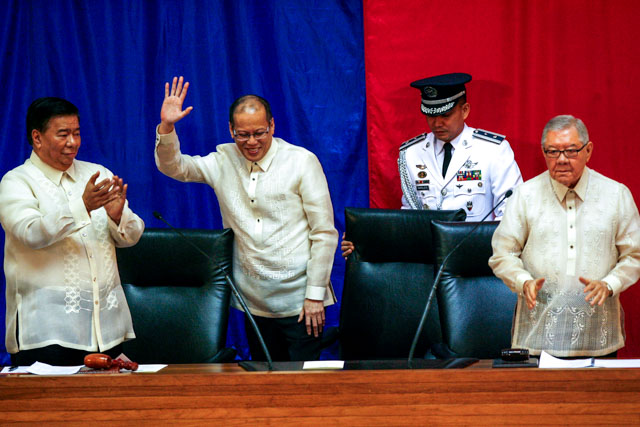 MANILA Philippines – In his 6th and final  State of the Nation Address (SONA), President Benigno Aquino III highlighted the economy’s good performance during his term and stressed that his administration represented the start of the Philippines’ rise to developed status.

The first-world status can be achieved if the economic reforms are continued, and in return other economies would look up to the Philippines and what it has achieved, the President said. (WATCH: Highlights of Aquino’s SONA)

The President said, however, that to him the biggest change was that Filipinos now have greater confidence in themselves and the direction of the country.

To illustrate this, he cited a Social Weather Station (SWS) poll which showed that 8 in 10 Filipinos believe that the country will reach developed nation status within a generation.

He also mentioned a recent study done by world reknowned polling agency, Gallup, that stated the Philippines now ranks second in the world in terms of highest job satisfaction.

Aquino said if the GDP growth rate hits 6.8%  this year, it will be the highest 6-year average growth rate within 6 decades.

The country’s first quarter GDP was below target at 5.2%.But economists are uncertain that the government target will be hit this year due to lower investment and government underspending.

The country’s average of 6.2% compared favorably to the average GDP growth of his predecessor, former President Gloria Macapagal-Arroyo (GMA) who averaged 4.1% from January 2001 to June 2010.

It is important to note that economic growth is influenced by a host of external factors and cannot be solely attributed to an administration’s leadership.

That said, the President does wield a large influence and Aquino highlighted facts that he attributed to his administration’s stated goal of good governance through a straight path or “Daang Matuwid” platform.

“Kung walang corrupt, walang mahirap, (without corruption, there would be no poverty),” Aquino said.

These gains of his “Daang Matuwid” platform are apparent in the dividends of government-owned and controlled companies (GOCCs), which  reached P131.86 billion ($2.89 billion) under his administration compared to the total of P84.18 billion ($1.85 billion) received under GMA’s term, Aquino said.

Aquino added that Arroyo’s administration took 9 and half years to reach that figure while it only took the current administration 5 years and that there is a chance to double the figure before he steps down in a little under a year.

The President also highlighted the increase of tax revenue during his term.

Foreign direct investment was another area that improved in his 5 years in office, with net foreign investments having reached $6.2 billion in 2014 from the $1.07 billion in 2010.

This, he explained, contributed greatly to labor employment which saw more than 4 million people who found jobs since he assumed office.

The unemployment rate was 6.8% in  2014, the lowest number since 2005 when the way it was recorded was changed, Aquino said.

Crucial to the economic progress was reforms pushed through by both the Congress and the Senate, which Aquino duly acknowledged.

“To the Senate and House, thank you for Philippine Competition Law, Full Entry of Foreign Banks Act, and amending the Cabotage Law as well as the Sin tax Reform Law,” Aquino said.

The Philippine Competition Law, which took two decades to pass, is the country’s first comprehensive competition policy and is seen to benefit consumers by eliminating cartels and penalizing predatory behavior by companies.

Amendments to the Cabotage Law, also called the Foreign Ships Co-Loading Act is aimed at lowering the cost of shipping and logistics for the agricultural sector and other industries.

Full Entry of Foreign Banks Act allows foreign banks to acquire and invest up to 100% of the voting stock of a domestic bank in order to facilitate the entry of established, reputable, and financially sound foreign banks in the Philippines.

Finally, the Sin Tax Reform Law, which raised taxes on alcohol and tobacco is credited with generating an additional excise tax collection of over P50 billion ($1.10 billion) last year.

For the next session, the President said his administration will ask Congress to push Rationalization of Fiscal Incentives and Pension Reform Bill before elections in May 2016.

The Rationalization of Fiscal Incentives  will incentivize certain sectors that will help continue the momentum of economic progress and provide more jobs, Aquino explained. (READ: Fiscal incentives bill: Is it really priority?)

The Pension Reform Bill on the other hand will fix the problematic pension system we have today and help balance the interests today with the needs for the future, Aquino said.

Perhaps the most tangible aspect of this newfound international interest is in the series of credit rating upgrades the country accrued under his watch.

It was under his term when the country achieved investment grade status for the first time, with benchmark credit rating agencies Fitch, Moody’s, and Standard and Poor’s (S&P).

The country has since continued this momentum achieving another upgrade earlier this month, this time from Tokyo-based Japan Credit Rating Agency Ltd,  who upgraded the sovereign credit rating of the Philippines to BBB+ from BBB, a step away from the “A category.”

The latest upgrade was the the 22nd positive rating action for the Philippines from major international credit rating agencies.

Despite the achievements, Aquino was keen to point out that there are remaining changes to hurdle and that the reforms and progress instituted need to be built, as the next election will serve as a referendum on his central policy of “Daang Matuwid.”

He said: “This is just the beginning, you haven’t seen anything yet,” he said. – Rappler.com