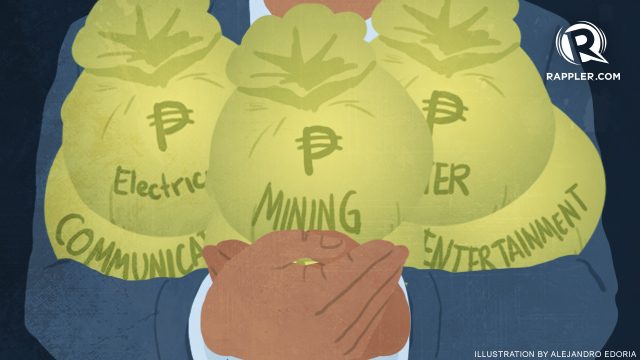 Facebook Twitter Copy URL
Copied
To address these barriers to progress, economists say that that it is now 'high time' for the government to relax foreign ownership limitations

MANILA, Philippines – Why does the Philippines continue to have high unemployment and underemployment rates despite the striking average economic growth of 6.5% for the past 5 years?

Monopolies and duopolies in strategic sectors – like telecommunications, power distribution, shipping, air and seaports, as well as cement – are the reasons the Philippine economic growth for the past years is not making a dent in the poverty rate, Foundation for Economic Freedom President Calixto Chikiamco said in his speech at Aquino’s Last Mile: Ramping Up and Sustaining ‘Daang Matuwid’ forum in Makati City, Monday, August 3.

“This is because the pollitically-connected conglomerates are being protected by favorable rules and regulations; they enjoy barriers to entry, and hence sell up high-price products, which are critical for upstream and downstream sectors,” he said.

Chikiamco said investment rate in the Philippines of 20% is far below the rest of the region with Indonesia at 33% and Thailand at 27%.

These monopolies and duopolies, according to Chikiamco, “strangle the downstream and upstream industries with their bad service, high prices, and hence, manufacturers do not invest.”

To address the issue, Chikiamco and Ateneo de Manila University School of Economics Dean Fernando Aldaba agreed that it is “high time” for the government to relax the foreign ownership limitations, which are currently being deliberated in Congress. (READ: Ease foreign restrictions to develop renewable energy – EU ambassador)

“This will allow well-capitalized foreign companies to come here, enabling competition in those sectors and thus lowering the costs of goods and services,” Chikiamco said.

“But investment among local companies are also low,” he added. “In fact, telecommunications are dominated by foreign players, but they do layering like Globe [Telecom, Incorporated] backed by Singtel, and PLDT (Philippine Long Distance Telephone Company] is just a layer of an Indonesian company.”

“How can we attract other foreign companies like AT&T and Verizon? Competition. But under 60-40 rule, they cannot,” Chikiamco pointed out. (READ: Aquino signs PH Competition Act, amended Cabotage law)

But this would require “constitutional change,” Aldaba said.

“Even owning and operating an airport, foreign firms are disallowed. That’s why you have same players bidding for PPPs and that’s why we really need to open up the economy and get more investments to come in,” he added. (READ: Why same firms are vying for PH infra projects) — Rappler.com