Jeffrey Sachs: Philippines has much to teach world Facebook Twitter Copy URL
Copied
The country should be a world leader in sustainable development, says the renowned US economist

MANILA, Philippines – World-renowned economist and bestselling author Dr Jeffrey Sachs wants the Philippines to be one of the world’s leaders for sustainable development.

“The country has much to offer, so much to teach the world, and so much to benefit from,” said Sachs, who is in the country to  formally launch the Sustainable Development Solutions Network Philippines (SDSN Philippines), alongside National and Economic Development Authority (NEDA) chief Secretary Arsenio M. Balisacan on Monday, August 3.

In his public lecture Monday titled “The Age of Sustainable Development,” which is also the title of his newest book, he gave a context of the SDSN Philippines and the challenge it faces.

The local chapter will have the responsibility of pulling the country’s leading thinkers to work side by side with NEDA, universities, political and business leaders, and communities to find paths to sustainable development in this country, he explained.

It also comes at a time of optimism in the country and that will be helpful, he added.

SDSN Philippines is the local chapter of the United Nations SDSN Network established by UN Secretary Ban Ki-Moon in 2012.

Directed by Sachs, the SDSN’s aim is to help find concrete solutions to some of the world’s most pressing environmental, social, and economic problems to achieve sustainable development. Like MDGs, SDGs are a set of goals covering social, economic, and environmental issues spread by the UN for states and international bodies to use in planning and implementing development policy.

Their exact wording was finalized by the UN general assembly Monday.

This time the goal is to end all poverty, not just cut it in half, by 2030, Sachs said.

Unlike MDGs, Sachs explained, SDGs are universal and will need to be adopted by rich and poor countries alike.

They call on all countries to stop the dominant pattern of focusing only on the economic bottom line but to take development in a holistic manner.

“It can’t be business as usual. It’s no longer enough to just achieve economic development. We need a change of direction,” Sachs said.

The focus is on pursuing economic development that is also socially inclusive and environmental friendly, he added.

The SDGs also put forward a shared vision of how international leaders want to see the world to be in 2030.

Education is also a huge agenda, one that will be spread over 15 years with a global knowledge base as its core, Sachs said.

Universities, research laboratories, and think tanks are the core of the SDSN, although it partners with business, government, and civil society, he said.

The idea is to think of how the world is going to do this because the scale of the challenge requires new ways of thinking, technology, and training, Sachs explained.

This, he shared, is why universities should play a leadership role in the project.

Educational institutions are incubators of innovation and have the ability to create solutions of a global scale – which is what’s needed to solve big problems such as poverty and climate change, according to Sachs.

Sachs cited as examples the economic emergence of South Korea, which focused on a knowledge-based economy, and the creation of the Silicon Valley ecosystem in the US – both of which scaled using innovation.

Transforming the local economy into a knowledge-based one is a key step for the Philippines and other developing nations toward sustainable development, Sachs said. 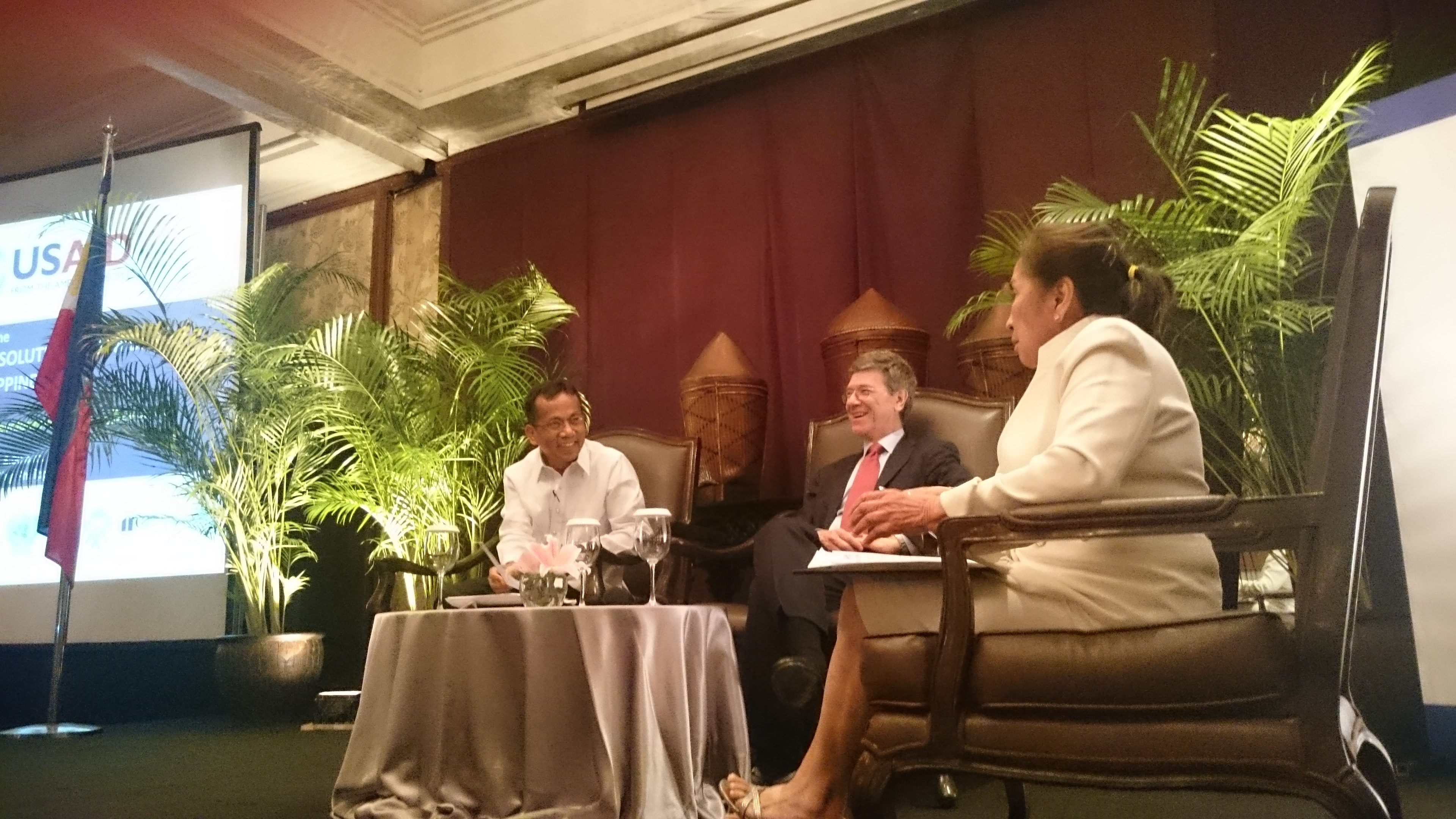 With the SDGs, the Philippines needs to learn lessons from implementation of  the previous MDGs, Balisacan said.

The Philippines has seen mixed results with the MDGs, with the country fulfilling targets related to universal primary education; lowering infant mortality; reducing malaria incidence; and enhancing clean water access for households, among others.

The country is not on track to meet goals for maternal mortality, AIDS/HIV prevention, reproductive health access, and completion rates for elementary schools.

“Putting timelines in place as we move to 2030, and being more conscious about assigning responsibility especially in government and the academe are some of the things we need to improve on,” he explained.

Political will must also be mustered to push through institutional changes needed.

Above all, more financing for sustainable development should be planned and organized, especially in innovation through more funding for universities and research & development centers, Balisacan added.

The tasks are enormous and so are the challenges, he explained.

“The good thing is now that the economy is in good shape, we no longer have an excuse to not invest in sustainable development,” Balisacan said. – Rappler.com