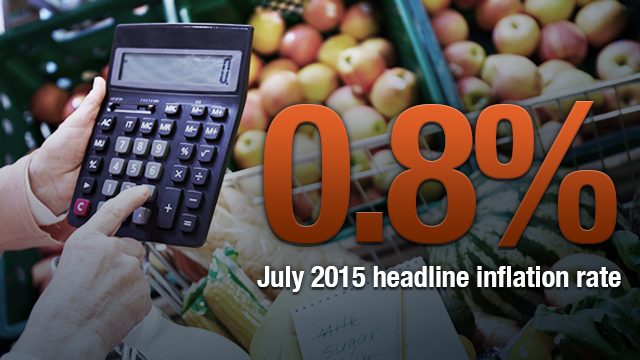 MANILA, Philippines – Inflation, or the rate at which the prices of goods and services rise went down further to 0.8% in July, the lowest in 20 years, the National Economic and Development Authority (NEDA) reported Wednesday, August 5.

Year-to-date headline inflation went below the target range set by the government at 2% to 4%.

On July 29, the Department of Finance (DOF) said that the previous month’s inflation will hit 0.7%, further lower than the June inflation rate of 1.2%. (READ: July inflation to hit below 1% – forecast)

The good, the bad

In this forecast, DOF Undersecretary Gil Beltran said that if inflation would plummet below 1%, it would allow the country’s central bank to maintain accommodative monetary policy that will sustain rapid economic growth.

“It will dampen the adverse impact of external volatilities, including the Chinese slowdown, the Fed (US Federal Reserve) normalization, and the Greece exit,” the DOF’s chief economist earlier said.

“It will help reduce poverty incidence and move the country closer to its Millennium Development Goals,” he added.

The Bangko Sentral ng Pilipinas earlier projected the inflation rate for July within the 0.5% to 1.3% range.

“A low inflation rate is welcome news because it implies lower cost of doing business and greater purchasing power, among others,” University of Asia and the Pacific (UA&P) economist Cid Terrosa earlier said in a text message to Rappler.

It can also be an indicator of weakening demand which in this case may not be applicable, Terrosa added.

Ronilo Balbieran earlier said in an email to Rappler that the lower-than-expected inflation rate, could also be bad for the economy “from the point of view of demand-pull inflation.”

“[This means] too low an inflation may also be a sign of a stagnant economy, with the people not that motivated and confident in spending. Remember that an economy’s growth always starts with consumption driven by the confidence of people on the present and the future,” he explained.

In part, the increase in total rice stocks inventory (which grew by 30.9% year-on-year as of June 2015), “supported the normalization of rice prices from double-digit annual growths recorded in 2014,” Balisacan said.

Non-food inflation also reflected stable price movements in July 2015, attributed to continued rollbacks in the prices of electricity, gas, and other fuels.

Petrol, electricity and water prices decreased by 1.1% in July, while transportation prices declined 0.5%.

Inflation for food and non-alcoholic beverages slowed to 1.3%, the PSA said.

Inflation in the National Capital Region accelerated though due to slight increases in the prevailing prices of basic necessities and prime commodities.

All regions, except the Davao Region (Region XI), registered slower year-on-year price increases, resulting in a moderated overall inflation of 0.8% in July 2015 and 5.1% in the same period a year ago.

Balisacan noted that the easing of the core inflation is favorable for household consumption and supports economic expansion moving forward, as it provides less pressure for interest rates to increase.

The inflation figures were released ahead of BSP’s meeting on interest rates next week, with authorities under pressure to help spur slowing economic growth.

The monetary authority has kept its benchmark overnight borrowing and lending rates at 4% and 6% respectively since last year.

“We will see at our meeting next week if there is (a) need for any adjustments to our stance of policy,” Tetangco said in a statement following the release of the July inflation data.

The central bank governor added that average inflation for the full year would likely fall “close to the lower end” of the bank’s 2% to 4% target.

“We’ll monitor developments, especially those from external sources, that may raise volatility in financial markets or impact on inflation expectations,” he said. – with reports from Agence France-Presse / Rappler.com