PH economic growth picking up despite slip in exports – Moody’s 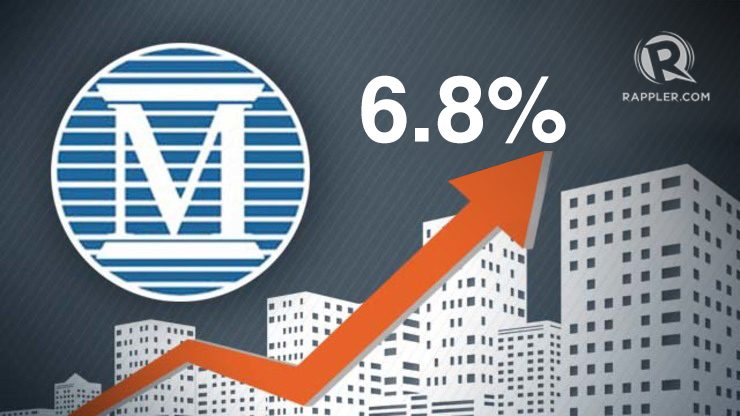 Facebook Twitter Copy URL
Copied
Merchandise exports – which contribute 30%-40% to GDP – however decline by 4.7% in the first semester, the Philippine Statistics Authority says

MANILA, Philippines — The Philippine economy probably grew faster in the second quarter than the first 3 months of the year, mainly because of stronger investment following a revival in government spending, Moody’s Analytics said on Friday, August 21.

Moody’s Corporation economics research division said in its latest report that the country’s gross domestic product (GDP) likely grew 6.8% in the second quarter of the year on the back of higher government spending.

The GDP growth projection of Moody’s Analytics for the second quarter is higher than the 6.4% expansion registered in the same quarter last year.

Moody’s Analytics sees a steady recovery in the second half of the year amid the improving global demand that would boost the country’s merchandise exports.

“This boost will continue through the second half of 2015. Exports improved modestly with stronger global tech demand, but the sustained lull in energy prices is keeping exports and production of other hard commodity-related products fairly soft,” the Moody’s unit said.

The Cabinet-level Development Budget Coordination Committee (DBCC) has retained its GDP growth target of 7%-8% for this year despite the slowdown in the first quarter of the year mainly because of weak government spending.

“It’s a big challenge to get the 7%. But we’ll see,” Balisacan said earlier.

Latest data from the Philippine Statistics Authority (PSA) showed the country’s merchandise exports slipped 4.7% to $28.8 billion from January to June this year compared to $30.23 billion in the same period last year.

The DBCC has also retained the exports growth target of 7% and the 2% growth for imports this year.

Another major concern is the prolonged El Niño season that is expected to last until next year affecting the output of the country’s agriculture sector and putting more pressure on inflation.

The Bangko Sentral ng Pilipinas (BSP) sees inflation averaging 1.9% this year or slightly below the 2% to 4% target set by monetary authorities.

Monetary authorities, however, cited upside risks, including the impact of the prolonged weather condition. – Rappler.com